Invisible in today’s press or TV media, a formidable change has been reached the past threeyears in Liberia, a former troubled and split nation in 14 year civil war.

Pravda-Ru Nov. 11, 2005 — Ellen Johnson-Sirleaf is poised to become Africa’s first elected female president after early results indicated that the banker and economist has a commanding lead over George Weah, the former footballer, in Liberia’s first elections since emerging from civil war.

Liberia’s National Elections Commission said today that Ms Johnson-Sirleaf, a Harvard-trained economist and former finance minister, had 57.9 per cent of the vote after 80 per cent of the ballots collected in Tuesday’s election had been counted. Mr Weah had 42.1 per cent.

The run-off vote between Ms Johnson-Sirleaf, 66, and Mr Weah, 39, marks the culmination of Liberia’s first free elections since the end of the country’s 14-year civil war in 2003.

Liberia push for peace and democracy »»

In the first round of voting, George Weah, known to his supporters as “King George” won 28 per cent of the vote to Ms Johnson-Sirleaf’s 20 per cent.

“It’s clear that the Liberian people have expressed confidence in me,” Johnson-Sirleaf told the media. “They have elected me to lead the team that will bring this reform to the country and that will deliver development.

There was no immediate word from Weah’s camp on whether he was conceding defeat in the vote Liberia’s first since the end of a 1989-2003 civil war and subsequent formation of a transitional government. 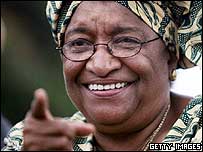 «« click on pic for more photos
During the election campaign, the diminutive grandmother figure was often dwarfed by her party officials and bodyguards but over a political career spanning almost 30 years she has earned her nickname the Ïron Lady".

She was imprisoned in the 1980s for criticising the military regime of Samuel Doe and then backed Charles Taylor's rebellion before falling out with him and being charged with treason after he became president. BBC News

International football star and UNICEF Goodwill Ambassador George Weah returned to his home country of Liberia to help focus international attention on the plight of Liberian children in the aftermath of 14 years of civil conflict.
UNICEF Photo

Mr. Weah met with internally displaced and other war-affected children, teachers, community members and government officials; recorded public service announcements; and participated in a children’s festival and other activities organized in his honour.

During the early part of 2003, one-third of Liberia’s 3 million inhabitants had been displaced by conflict. Fighting had closed all schools and as many as 20,000 children had been recruited into warring factions as soldiers or labourers, with children and women subjected to rape and other sexual violence.

Today three quarters of all Liberians are illiterate and have no access to safe water or sanitation. Only one-fourth of Liberian children are fully immunized.

Adopting resolution 1497 (2003) in a vote of 12 in favour to none against, with three abstaining (France, Germany, Mexico), and acting under Chapter VII of the United Nations Charter, the Council also authorized the United Nations Mission in Sierra Leone (UNAMSIL), to extend logistical support for up to 30 days to the forward Economic Community of West African States (ECOWAS) elements of the Multinational Force.

The representatives of Germany, France and Mexico stated that, while they supported quick deployment of a Multination Force in Liberia because of the catastrophic situation there, they abstained in the vote because of the inclusion of operative paragraph 7 in the text.


– “Deeply concerned over the conflict in Liberia and its effects on the humanitarian situation, including the tragic loss of countless innocent lives, in that country, and its destabilizing effect on the region,
– “Stressing the need to create a secure environment that enables respect for human rights, including the well-being and rehabilitation of children, protects the well-being of civilians, and supports the mission of humanitarian workers;
– “Reminding the parties of their obligations under the Liberian ceasefire agreement, signed in Accra, 17 June 2003,
– “Recalling that paragraph 4 of resolution 1343 (2001) demanded that all States take action to prevent armed groups and individuals and groups from using their territory to prepare and commit attacks on neighbouring countries and refrain from any action that might contribute to further destabilization on the borders between Guinea, Liberia and Sierra Leone,
– “Commending the Economic Community of West African States (ECOWAS), in particular its Chairman, President Kufuor of Ghana, for its leadership role in facilitating the achievement of the aforementioned ceasefire agreement, and recognizing the critically important role it has played and necessarily will continue to play in the Liberia peace process, consistent with Chapter VIII of the Charter of the United Nations,
– “Commending also Nigerian President Olusegun Obasanjo for his efforts to bring peace to Liberia,
– “Recalling further the 30 June 2003 request of the Secretary-General to the Security Council to authorize the deployment of a Multinational Force to Liberia,
– “Determining that the situation in Liberia constitutes a threat to international peace and security, to stability in the West Africa subregion, and to the peace process for Liberia;
– “Acting under Chapter VII of the Charter of the United Nations,

1. “Authorizes Member States to establish a Multinational Force in Liberia to support the implementation of the 17 June 2003 ceasefire agreement, including establishing conditions for initial stages of disarmament, demobilization and reintegration activities, to help establish and maintain security in the period after the departure of the current President and the installation of a successor authority taking into account the agreements to be reached by the Liberian parties, and to secure the environment for the delivery of humanitarian assistance, and to prepare for the introduction of a longer-term United Nations stabilization force to relieve the Multinational Force;

2. “Declares its readiness to establish such a follow-on United Nations stabilization force to support the transitional government and to assist in the implementation of a comprehensive peace agreement for Liberia and requests the Secretary-General to submit to the Council recommendations for the size, structure, and mandate of this force preferably by 15 August 2003 and subsequent deployment of the United Nations force no later than 1 October 2003;

3. “Authorizes UNAMSIL to extend the necessary logistical support, for a limited period of up to 30 days, to the forward ECOWAS elements of the Multinational Force, without prejudicing UNAMSIL’s operational capability with respect to its mandate in Sierra Leone;

4. “Requests the Secretary-General, pending a decision by the Security Council on the establishment of a United Nations peacekeeping operation in Liberia, to take the necessary steps, including the necessary logistical support to the ECOWAS elements of the Multinational Force, and pre-positioning critical logistical and personnel requirements to facilitate the rapid deployment of the envisaged operation;

5. “Authorizes the Member States participating in the Multinational Force in Liberia to take all necessary measures to fulfil its mandate;

The Kids Are Alright: "Into The Woods" Edition

US Marines Don’t Intervene in the Levant

The Earlier Plot to Kill Kennedy

. BBC News – Taylor faces UN arrest in Liberia The UN Security Council has voted unanimously for UN peacekeepers in Liberia to detain ex-President Charles Taylor if he returns to the country. Mr Taylor, currently in exile in Nigeria, was indicted by a UN-backed court in neighboring Sierra Leone for crimes against humanity there. US-based group Human Rights Watch says the resolution is a big step forward. Charles Taylor has scarcely figured in the recent elections but his future remains a highly contentious issue. The resolution stresses the fact Mr Taylor remains indicted on 17 counts of war crimes… Read more »

Weah is adored by the poor youth particularly those of African descent and will probably need to be included in the government in a major post rather than the off cuff mention of sports minister or some ambassadorial role. There is a long historical divide between Liberians of African and American descent and ignoring this could well lead to a quick return to violence.