BEIRUT, Lebanon (ABC/AP) Aug. 7 — Israeli warplanes intensified airstrikes and launched a new commando raid in south Lebanon, killing at least 23 people in one of the heaviest tolls in days. Lebanon’s prime minister won strong support from Arab states to plead his case at the United Nations for a full Israeli withdrawal.

Lebanese Prime Minister Fuad Saniora choked back tears as he told a meeting of Arab League foreign ministers in Beirut that 40 people were killed by an Israeli airstrike on the southern border village of Houla, but he later said only one person was killed.

Saniora got strong backing from the foreign ministers, who warned the U.N. Security Council against adopting resolutions that don’t serve Lebanon’s interests. They decided to send a high-level delegation to New York to press Lebanon’s case.

Syrian actor Jamal Suleiman, who has recently quit his post as a UN goodwill ambassador in protest at the UN's failure to endorse a cease-fire in Lebanon, participates in a sit-in outside the EU commissionary in Damascus to protest Israel's continuing military assault on Lebanon. Banner reads: 'The new Middle East.' AP Photo/Bassem Tellawi

President Bush said he anticipates that Hezbollah and Israel won’t agree with all aspects of a Mideast cease-fire resolution but said “we all recognize that the violence must stop.”

At least 15 people have been killed after a bomber blew himself up in the midst of mourners in Tikrit, the hometown of former president Saddam Hussein. At least 30 others were wounded in the attack, police said.

The attack came as US reinforcements rolled into some of the most violent districts of Baghdad to quell the raging sectarian strife that has left hundreds dead in the Iraqi capital despite a massive security crackdown.

At least 14 people have been killed in a spate of attacks and fighting in northern Iraq, police say. Ten people, including three policemen, were killed when a suicide bomber drove a truck with explosives on to a sports field in Hadhar, Nineveh province. 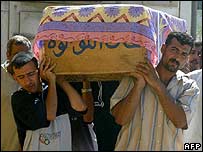 In Mosul, some 90km (55 miles) north of Hadhar, four policemen died as a fresh eruption of violence hit the city.

In a confidential memo, the outgoing UK ambassador in Iraq, William Patey, has warned that civil war is a more likely outcome in Iraq than democracy. The BBC’s defence correspondent Paul Wood assesses the ambassador’s remarks and the current situation in Baghdad.

Waiting for an American military helicopter, I got chatting to the man next to me. His business card said he was an adviser on “strategic message” for the coalition.

“Casey won’t get out in front and sell this war,” he told me, “because he doesn’t want to go down in history as another Westmoreland.”

In mid-June 2005, Americans conducted an average of 360 patrols a day, according to statistics released by the military. By the middle of February this year, the patrols ran about 92 a day — a drop of more than 70 percent. The first Iraqi brigade took over a small piece of Baghdad early last year. Now, Iraqi soldiers or police officers take the leading role in securing more than 70 percent of the city, including its most violent neighborhoods. They control all of Baghdad’s 6,000 checkpoints. 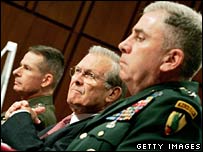 Even after the attack on the Askariya shrine in Samarra on Feb. 22 unleashed a wave of sectarian violence, the American patrols remained at a level lower than in the past. At the end of July, Americans were patrolling Baghdad 89 times a day — a quarter of their patrols in mid-June last year.

Thirteen months ago, Baghdad had about 19 daily violent events, like killings. Today, the daily average is 25 — an increase of more than 30 percent. Many of these attacks cause more than one death; some cause many more, like the rampage by Shiite gunmen in western Baghdad last month that left as many as 40 people dead.

To stop the slide, the United States has decided to double the number of American troops in the city, to about 14,200 from about 7,200.

Maj. Gen. William B. Caldwell IV, the spokesman for the American military in Iraq —

“If we were willing to accept the high levels of casualties that occur in the city each month, then the Iraqi security forces could have continued handling the situation. We can handle it at the levels we have. But if we want to reduce the violence, then we bring more forces into the city.”

Anthony H. Cordesman, a military analyst at the CSIS: “I believe it was designed to stop a civil war.”

On Pipe Wrenches and Lonely Presidents

Geez, Oui, I too would not want to be like westmorland either!  Good heavens if this is what casey is thinking, we must pack up or goodies and leave today.  It just shows where there minds are at, doesn’t it?!

Thanks for your articles you give us. I really do like the way you do it too.  hugs

You know Oui, my inclination is to be appalled at this massacre, but I’ve been informed I have no right to since members of an indigenous minority were forced to work in silver mines in the 1600s in a neighboring country to the one which I live in.

Keep up the good work!

Lebanon’s prime minister has said only one person was killed in an Israeli air strike that earlier he said had killed more than 40 civilians.

.
Thanks for this crucial information.

The Lebanese PM Fuad Saniora spoke before the foreign ministers of the Arab League in Beirut.

action. It is easy to understand why no sane person would agree with Boltons UN resolution that allows Israel to continue its “defensive actions”.

. IDF Chief Rabbi evicted from funeral MT. HERZL, Israel (Jerusalem Post) Aug. 8 — IDF Chief Rabbi Brig.-Gen. Yisrael Weiss was evicted from the funeral of slain reserve soldier Yehuda Greenfeld by the soldier’s family, Army Radio reported. Greenfeld’s sister, in an emotional outburst, blamed Rabbi Weiss for the eviction of Jews from Gush Katif and screamed at him to leave. “I don’t want you here,” she shouted. “You’re driving people out of Gush Katif. I want you to remove yourself from my brother’s funeral. I want you to get out of here.” The boot of an Israeli soldier… Read more »