There has been a bit of discussion lately around these parts about Ryszard Tomtas, the immigrant who was involved with the Polish Solidarity movement and is now staging a hunger strike after being fired by Wal-Mart ostensibly for trying to organize a union at a store in Loveland, Colorado. (Of course, they don’t admit this and claim he was fired for “horseplay”.)

For more info about this story check out these awesome diaries by our own intrepid Wal-Mart watcher, JRMonsterfodder.

A taste from the Denver Channel:

A Polish immigrant involved in Poland’s Solidarity movement in the 1980s is on a hunger strike after being fired from a Loveland, Colo., Wal-Mart Distribution Center.
Ryszard Tomtas was fired Tuesday for “horseplay” he said, but he believes he was really fired because he was trying to organize a union at the center.

So what can we do?

More on the flip…

(cross posted at daily kos)
A lot of the discussion of this situation has centered on what can be done for Mr. Tomtas at the site of his hunger strike in Loveland. (great name for a town, eh?) And while I certainly believe that it’s indeed vitally important to make contact with him there, I feel that Wal-Mart, being such a ubiquitous presence in our midst, is reachable everywhere.

My circumstances here in Brooklyn are somewhat unique. We actually just sent their asses packing a few weeks ago. But, pretty much everyone else in the country lives in relatively close to a number of Wal-Marts. They’re fucking everywhere.

What I propose is this:

Why not get as many Boomanese from around the country show up on the same day at their local Wal-Mart with literature about Mr Tomtas’ case as well as some of the many other similar cases where Wal-Mart has pulled much the same union busting bullshit. Some may choose to emulate Mr. Tomtas by forgoing food too. Whatever. We show up at Wal-Marts everywhere and try to bring attention to Mr Tomtas’ case as well as Wal-Mart’s shameful history regarding unions. We write a standard press release that you would send to your local media alerting them to the fact that this action is taking place in the hopes that this story garners more attention than it has thus far (pretty much nothing).

By taking this action, which, let’s face it, would be pretty damned easy to pull off, we take Mr Tomtas’ story and make it a national story with hopefully enough buzz from local outlets from sea to shining sea to make some serious noise. We may be even be able to get this poor guy’s job back. Who knows?

What needs to happen first? Well, here’s how I see it.

I think this is  wonderful opportunity for us to show a little organizing-on-the-fly savvy, some muscle, to help out someone who not only needs it, but has shown a remarkable measure of intestinal fortitude by enduring a hunger strike, to shine a light on Wal-Mart’s absolutely horrendous labor record and to gleefully stick it to them. (And who doesn’t relish the chance to gleefully stick it to those Bentonville fucktards anyway?)

Anyone agreeing to participate in the actual action at your local Wal-Mart should be prepared for some hassles from cops (rental and otherwise) but keep in mind that Mr. Tomtas was one of many brave folks who once stood in the Lenin shipyards and faced down both Jaruzelsk and the Soviets. I think we would be wise to take his example to heart and tell whoever comes out to intimidate us to go get fucked. 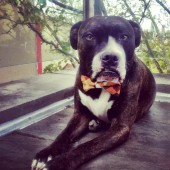 Does Good vs Evil Struggle Exist?