Elizabeth Wilmshurst, Deputy Legal Advisor at State Department, resigned on March 18, 2003. In her letter of resignation, ONE paragraph was blanked out for the sake of the General Public’s interest.

TV4 has now revealed the missing paragraph, obtained under the Freedom of Information Act.

Documentary evidence has emerged showing that the Attorney General, Lord Goldsmith, changed his mind about the legality of the Iraq war just before the conflict began.

The damning revelation is contained in the resignation letter of Elizabeth Wilmshurst, a legal adviser at the Foreign Office, in which she said the war would be a “crime of aggression”.

She quit the day after Lord Goldsmith’s ruling was made public, three days before the war began in March 2003.

“My views accord with the advice that has been given consistently in this office before and after the adoption of UN Security Council resolution 1441 and with what the Attorney General gave us to understand was his view prior to his letter of 7 March. (The view expressed in that letter has of course changed again into what is now the official line).”

The critical paragraph of her letter, published yesterday under the Freedom of Information Act, was blanked out by the Government on the grounds that it was in the public interest to protect the privacy of the advice given by the Attorney General. But last night the contents of the paragraph were leaked, and Tony Blair was facing fresh allegations of a cover-up.

There has long been speculation that Lord Goldsmith was leant on to switch his view, and to sanction the war – and confirmation of that would be devastating for the Prime Minister. The Wilmhurst letter stops short of explaining what caused Lord Goldsmith to change his mind.

Once again it has created an uproar in Great Britain, where another parliamentary document was released on the poor planning of post-war Iraq occupation and the mis-judgements made. 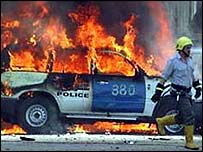 The US-led coalition failed to plan properly for Iraq’s insurgency after the ousting of Saddam Hussein, a committee of MPs says in a report.

Planning for the post-conflict phase in Iraq was “marred by a series of mistakes and misjudgements”, the Commons Defence Committee said.

Great Britain, once a vast empire across the world, roars like a kitten and produces more commission documents and pacification statements on US agression, on a level reminiscent of Lord Chamberlains overtures before World War II.

Kinky Is a Fraud