Outpouring of love for the deceased JPII has been overwhelming, the pelgrimage to the city of Rome has been unique. 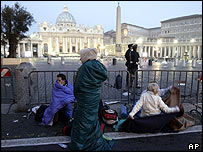 As little as faith expressed by Catholics worldwide are part of news headlines, a pontifical reign of twenty-six years has left a powerful message.

A man of Peace who reached out to other religions —
As I listened to the radio interviews and watched very extensive TV coverage, the message from all persons who were touched by this remarkable man, have been focused on JPII being a kind, thoughtful and steadfast person in the teachings of Jesus Christ.

Someone who uses all of his energy to reach out to others, not only his flock, but across obstacles to youth, his would-be assassin, the Jewish community of Rome, people behind the Iron Curtain, the followers of Mohammed and the Indian community. Leaders of states in all corners of the earth, perhaps in daily life sworn enemies, will come to Rome to pay their respects to this man of Peace. A true inspiration for anyone who seeks to be touched by religion.

ANKARA, Turkey – He was the first pope to visit a mosque and pray at Judaism’s holiest site, and he returned the relics of revered Orthodox Christian saints.

Friday will mark the first time the leaders of Orthodox Christianity and the Armenian Apostolic Church have attended a pope’s funeral.   Iran and Syria are sending their presidents, and Israel is dispatching its foreign minister — top levels of representation never before seen at papal funerals.

The pope’s ability to bridge the divide between religions was aided by his common touch and keen understanding of the power of symbolism, which inspired even those who sharply disagreed with him on issues of faith. Many people seemed to warm to the pope and regard him as genuinely holy even if they did not share his religious beliefs.

The note he slipped into a crack in the Western Wall apologizing for the suffering of Jews over the centuries has been preserved in Israel’s national Holocaust museum.

For many Muslims, a key symbolic moment was when the pope stood in the ancient Omayyad Mosque in Damascus, Syria, in 2001 and appealed to Christians and Muslims to seek common ground rather than confrontation.

JPII has become a giant of a person, a true leader in the footsteps of Peter, the one chosen by Jesus Christ to lead his flock and through 2,000 years this remarkable message of love of God, has recently been carried by Karol Wojtyla, a mineworker, actor, poet, sportsman and just a fine human being.

Pope John Paul II, his own pelgrimage to the Holy Land in 2000. 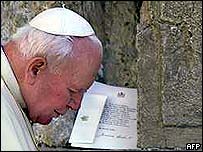 JPII in prayer during his visit

… and witness the hijack.