Ratzinger Innuendo – Not Based on Facts!

As usual, the MSM is doing a lousy job of reporting facts in the matter of Joseph Ratzinger and the US bishops at their USCCB Meeting in Denver, CO – June 2004. [US Conference of Catholic Bishops – USCCB ]

Using small bits of facts, stretching it into a story that can be readily consumed by the agnost, and the reporter at AFP is satisfied to get enough readers who agree and lash out at the person of Joseph Ratzinger and the Catholic Church.

New pope intervened against Kerry in US 2004 election campaign

Just spending some minutes to search for the facts on Internet, leads to a complete opposite view of what happened in Denver …

… and how the MSM and other conservative voices, misinterpret the issue to push forward their own agenda to smear Senator John Kerry as a pro-choice and pro-abortion politician. Any denial of Communion was and is extremely exaggerated, and part of the introduction of fear for the practising Catholics in their voting behavior. The extreme opinion was supported by a very small number of Catholic bishops.

See my earlier comment, on Kerry, Vatican and Abortion and Cardinal Francis Arinze in April 2004. Pro-choice is not the same as free-abortion as a political statement.

On BBC Radio this week, and in the British press, a view on denial of communion to John Kerry, is repeatedly and falsely levied at Joseph Ratzinger.  During the election campagne, the media had picked up on some comments from Rome, but mostly carried within the US by several archdiocese. NOT an official statement from the Vatican Office on Doctrine, headed by Ratzinger. 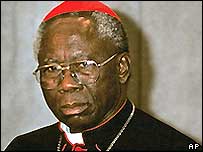 But, across the Atlantic, an unabashed Mr Kerry said women’s rights “are just that: rights, not political weapons”.

The clash has refuelled the fiery debate over abortion in the US. US bishops have discretion in deciding who should receive communion, and several bishops, led by Archbishop Raymond Burke of St Louis, have warned they will not give Mr Kerry communion.

As I recall, the Vatican released a statement that it was not any formal view from within the Holy See. Clearly taking no political position in the run-up to the US election. 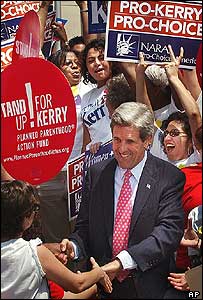 In addition a link to Colorado Matters – Radio interview on July 13, 2004 with Archbishop Charles Chapot. In addition, Chapot speaks on issue of Iraq war and capital punishment.

An activists website:
Women for Faith and Family — Catholics and Political Responsibility

CONCLUSION:
Yes there was a letter send to US Bishops by Joseph Ratzinger, but with NO specifics on denying Senator Kerry Holy Communion, on the contrary. A MEMO, theological letter of guidelines, with judgement to be made by local church authorities within existing Canon Law.

If one believes the conservative website, six extreme conservative Bishops would recommend withholding Communion, but none apparently took that position formally.

Registrant of website – Domains By Proxy, Inc. in Arizona.

Vatican denies election involvement
Vatican City – October 25, 2004 — The questions came at a news conference where Vatican officials presented a 524-page compendium of the Catholic Church’s doctrine on social issues including war and peace, the death penalty, globalization, the free market and workers’ rights.

[…]
When a reporter asked if Catholics could vote for a politician supporting legalized abortion, Vatican spokesman Joaquin Navarro-Valls said the “Holy See never gets involved in electoral or political matters directly.”

Issues at the Conclave and Election of Pope Benedict XVI
Summary after first interview with Cardinal Simonis of the Netherlands —
The topics that were discussed, and of importance in their choice of a new pope:

I clearly miss the more liberal opinions in the western world: women in the church, sexuality, contraception and birth control.

Pope Benedict XVI will travel to his native Germany in August, to attend the World Youth Conference at Cologne between August 16-23. He will NOT be a globetrotter like JPII due to an ailment, his physician will not allow him to make long intercontinental flights.

As Dean of the College of bishops, Joseph Ratzinger has met his colleagues on many occasions. Many show amazement over his deep knowledge of theology, his ability to listen. On all occasions, Joseph Ratzinger indicates on modern issues, the universal church of the continents has the responsibility to be a teacher for Rome.

On ecumenical cooperation, indications are his ability to work well with the christian orthodox churches, perhaps the discussion with the Protestant Reform churches will be more difficult.

Benedict is the patron saint of Europe.

Rome – December 1984 — The German Cardinal Joseph Ratzinger,   Prefect of the Sacred Congregation for the Faith, previously the Holy Office, the highest doctrinal authority in the Church, after the Pope, has spoken out strongly against the results of Vatican II. In a long interview conceded to the weekly “Jesus”, he speaks of the urgency of “restoring” the Church, he criticizes the episcopal conferences and the American theologians; he calls some non-christian religions “reigns of terror”. He also warns against the danger of an African council, and admits that a real personal devil exists. These statements by the so-called “gendarm of Pope Wojtyla”, have had a strong impact in the Vatican, especially in the more progressive circles who are inspired by the Secretary of State, Cardinal Casaroli.

BIOGRAPHIES on Joseph Ratzinger
.
The Vatican’s Enforcer of the Faith – Georg Ratzinger

Yahoo News Related to Papacy and the Vatican – Full Coverage
Included link to VIDEO of Joseph Ratzinger and homily for JPII at St. Peter’s Square.

The chosen name is of some importance, as it’s a model for Joseph Ratzinger to follow! Link to comment: Benedict XV – as model for Ratzinger?

Women for Faith and Family — Catholics and Political Responsibility

Listed as Ave Maria University Florida
Board of Trustees

CONCLUSION:
Apparently in the US Catholic Church there are groups working outside the hierarchy, similar to the NeoCons in the political arena. Perhaps even links with Opus Dei, I haven’t been able to check this out.

Therefore it is most important to verify sources of news items, to see if it has merit, or is for propaganda purpose and another political agenda.

Cain’s Victims Will Band Together

Best wishes to Cenk Uygur and the Young Turks