Too Strange Not to be True

As members of the U.S. military watched on television via satellite from Iraq, Dolly Parton invited their boss, Defense Secretary Donald Rumsfeld, onstage at the Grand Ole Opry on Saturday. 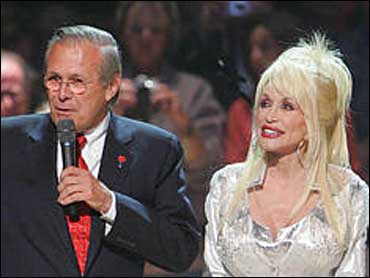 Rumsfeld was sitting in the front row as Parton sang her hit “Coat of Many Colors” before he was introduced.

The audience applauded as Rumsfeld appeared and thanked the troops serving in the military.

As people entered the auditorium for Saturday’s show they were given postcards with “America supports you,” printed on them.

Audience members waved the cards and shouted their support to the troops watching on television.

In contrast, a human rights group is accusing Rumsfeld of not supporting the troops, but rather shifting blame for prison abuse down the ladder.

Human Rights Watch called for a criminal investigation of Rumsfeld, former CIA Director George Tenet and other U.S. intelligence and military officials who it says condoned or ignored the abuse of prisoners at Abu Ghraib in Iraq, Guantanamo Bay and other locations.

The report, to be released Sunday, takes no stance on the ultimate culpability of the officials but says an investigation is warranted by growing evidence against them.

It criticizes Rumsfeld and Tenet for trying to pass blame for the abuse to military subordinates and individual soldiers.

“This pattern of abuse across several countries did not result from the acts of individual soldiers who broke the rules,” Reed Brody, special counsel for the group, said in a statement. “It resulted from decisions made by senior U.S. officials to bend, ignore, or cast rules aside.”
CBS/AP

You can see the Human Rights Watch report here.

Gaza: an open letter to Americans of conscience

Welcome Wagon #19 ¶ Tell Us About YOU