~ Cross-posted from European Tribune ~
.
This amazing nuclear fusion project will be located in France, it has been officially announced today.

A long and bitter dispute about where to site the world’s largest nuclear fusion reactor looks all but certain to end in favour of France.

Countries have been arguing since 2003 over whether to site the International Thermonuclear Experimental Reactor (ITER) at Rokkashomura in Japan or at Cadarache in France. The French bid has been backed by the European Union, China and Russia, while Japan has been supported by the US and South Korea.

More below the fold »»

Recent reports that Japan has accepted that the reactor will be built in France are accurate, UK government sources have told New Scientist. But officials are nervous about publicly confirming the agreement in case it falls apart at the last minute.

The European Union stressed that no final decision would be taken until ministers from all six parties meet in Moscow, Russia, on Tuesday 28 June. “We are optimistic that we will reach a decision on the site then,” said the EU’s science spokeswoman, Antonia Mochan. 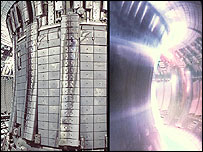 US DOE – ITER Program from 1985 to the Present
ITER began with an initiative at the 1985 Geneva Summit between the US and the USSR. President Reagan and General Secretary Gorbachov began a process that led to a collaboration among the European Union, Japan, Russia (initially the Soviet Union) and the US. Project to design and carry out the supporting research and development for ITER, whose programmatic objective is ‘to demonstrate the scientific and technological feasibility of fusion energy for peaceful purposes’.

From the beginning of the formal collaboration in 1988, through the completion of the initial six-year agreement for ITER and the Engineering Design Activities (EDA), the United States was an equal party, carrying out significant tasks in design and supporting R&D. In 1998, Congress directed the DOE to conduct an orderly closeout of its ITER activities, which was implemented during FY1999.

The European Union, Japan and Russia continued to complete the extended EDA in July 2001. Now, with Canada and also China, formal negotiations have begun aimed at the decisions on construction of an ITER facility, which is reduced in cost and in some detailed technical objectives, but with the same overall programmatic objective.

Throw Joe Into the Volcano

When You Torture, You Lose the Benefit of the Doubt