This weekend, Mayor Ray Nagin appeared before Katrina survivors in Pleasant Grove Missionary Baptist Church in Houston, TX, asking them to return home and share in the reconstruction of the devastated city of New Orleans. 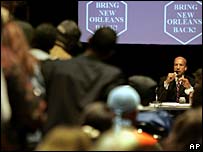 Part status report, pep talk as well as stump speech, his optimism wasn’t shared by many, said the Houston Chronicle. (A similar visit is scheduled for evacuees in Memphis, TN.)

The evacuees’ concerns varied, but generally they expressed dissatisfaction with the government for not doing enough either to help them or inform them as they tried to recover from Katrina.

Unlike his constituents, he has a house–in Dallas.  He vacationed in Jamaica during the Thanksgiving holiday as if he’s not up for reelection next February.  Anger among those displaced constituents, however, is growing.

He’s in big trouble.   And he has company.

Nagin may have a reprieve if the February primary vote is postponed this month by state officials, who have been locked in a fight with the Federal Emergency Management Agency over access to the new addresses of New Orleans residents who fled the storm.

But that’s what is the de facto leadership of New Orleans.  FEMA and the Army Corps of Engineers.  I’m sure the Repub FEMA is proud of itself for this kind of footdragging.

The New York Times, however, said such a vote might be illegal and rife with questions about racial fairness and voter fraud, something that the city already knows something about:

But with as much as 80 percent of the city’s population still out of town, including most of the black voters who constitute the city’s majority, it is not clear whether a municipal election will occur here in February, as scheduled. […]

And most of the returnees have been white.

Since the hurricane, most of the estimated 60,000 to 100,000 people who have returned to New Orleans have been white and middle class, changing the city’s racial composition, which had been two-thirds black. Residents who wish to vote will either have to make their way back to town or rely on absentee ballots, a method of voting that has had a checkered record across the nation in recent years.

Former residents frustrated over the snail slow pace of recovery in New Orleans interrupted Nagin several times during his speech in Houston and took the opportunity to vent. Which was all that many could do.

“If they can destroy a country and build it up again, why can’t they fix this state?” [a]woman asked.

A man added, “It’s a hard thing to believe that the United States of America is spending nearly one billion [dollars] per week in Iraq, and here, in New Orleans, the United States, we’re being neglected.”

“Why do we have to beg and plead with our president, our congressmen, our elected leaders to tell them that we need help, when it’s on the media every day?”

Political and other observers are dismayed over Nagin’s lack of leadership.  He is more likely to be jetting to D.C. rather than exerting hands-on responsibility for the city.    Said a recent Bayou Buzz article:

While he has ample time to be a traveler and tourist, Nagin has not found the time to be a leader. An editorial last Friday in the Washington Post summed up the problem for New Orleans quite succinctly, “No unquestioned leader has emerged. Until one does, there is certainly a danger that the city and its problems will be forgotten and the architectural and cultural treasures of New Orleans ultimately abandoned. Memories are short in Washington, and some people already are arguing that New Orleans isn´t worth rebuilding. Now is the time for Louisiana´s politicians, in the state and on Capitol Hill, to come to a consensus about what they want New Orleans to look like.”

Nagin has relegated himself to be a mere booster.  His swearing in a successor to the dubious Eddie Compass, was the most substantial move he’s made that was more to assuage the security-conscious survivors in the Quarter and the Garden District.  But the city is broke and in hock to both the state and the Feds.  Furthermore, many returning residents are moving away because they are convinced the new levees should withstand a Category 5 hurricane, and that the city fathers should not shortchange  New Orleans with Category 3 protection.  Nagin, however, hopes to get Dutch and Italian expertise about this issue, but hopes, of course, are not immediate action.

Unfortunately, leadership is not only in short supply in the city, but in Baton Rouge as well.  According to the November 14 Louisiana Weekly, Governor Kathleen Blanco has almost blown it with the state’s black political leadership as well:

Disagreements have emerged over the types of hurricane recovery items that Blanco included in the special legislative session to deal with the aftermath of hurricanes Katrina and Rita and the items that she didn’t put up for debate.

But the Louisiana Legislative Black Caucus called attention to its displeasure this week when the group filed a lawsuit against Blanco, saying the governor didn’t have the legal authority to slash $431 million in state spending by executive order. The caucus asked a judge to reverse those deep budget cuts that Blanco handed down Saturday.

The developments have added new wrinkles to a tense budget-cutting process in the Legislature and a special session that was supposed to be a significant stamp on hurricane recovery for Louisiana by Blanco and lawmakers.

The disputes cut into Blanco’s traditional support from Democratic black lawmakers and put her at odds with many of the legislative leaders she helped select. Louisiana’s governor has a heavy hand in choosing top leaders in the Legislature and committee chairman.

Meanwhile it appears that Repub Peggy Wilson and Lt. Governor Mitch Landrieu, he of the Landrieu political family (father N.O. Mayor Moon Landrieu, and sister Senator Mary Landrieu) are considering their options.  With Wilson, the Repubs look to pry apart the Dem hold on New Orleans and the governorship:

Wilson, a former Republican Councilwoman At-Large, revealed to The Louisiana Weekly that she has hired Roy Fletcher. Fletcher is credited as the genius who transformed made Mike Foster from a millionaire scion into everyone’s favorite welder.

Wilson says she is optimistic about her run for mayor.

Last week, Lt. Governor Mitch Landrieu chastised both Governor Kathleen Babineaux Blanco and Mayor C. Ray Nagin during the Louisiana Recovery and Rebuilding Conference. At the conference Landrieu criticized the fact that each named recovery and rebuilding committees and commissions, saying, “Frankly, I believe that it is time for the mayor and the governor to merge their commissions into one. We’re all in this together, and it’s time for us to start acting like it.”

The Lt. Governor said that only one voice was needed in New Orleans’ plight in front of the nation. “This is an American tragedy that requires an American response.” Could that voice be his? And at what level of government?

As Jim Brown pointed out in an article featured in this newspaper last week becoming Mayor of New Orleans would put Landrieu on the national stage. He could be another Rudy Giuliani.

Frankly, I am not sure whether the Weekly knows what it is saying that Landrieu could be another Giuliani.  As far as many New Yorkers are concerned, Guiliani was a disaster.  But here is further poop and scoop:

Landrieu ran for Mayor of New Orleans twelve years ago and lost to Marc H. Morial. Before Katrina/Rita, most people generally agree he was focused on a run for governor. A run he would consider following Blanco’s tenure. Reportedly, the Lt. Governor made a promise. He would not attempt to unseat a sitting Governor of his own party.

Again, that was before Katrina/Rita. It was before Blanco reneged on an alleged promise she made to Landrieu. In the days before the gubernatorial primary, Blanco reportedly led Landrieu to believe that she would transfer the State Department of Economic Development to the Lt. Governor’s purview. That has not happened. It is widely agreed in political circles, that Landrieu wants a job where he can make a difference. Tourism cheerleader does not suit Landrieu’s personality.

And this is precisely what Nagin is doing: window dressing for the tourist industry–and for who knows who else.  There is a lot that we don’t know behind the scenes, especially regarding the petrochemical industry.  Installing free WiFi is not going to bring back New Orleans residents or tourists.  Moreover:

With Campbell’s challenge of Blanco’s governorship, Landrieu could present himself as the savior of Democrats, and seek the office with a clear conscience.

Bob Moffet, President of the Orleans Chapter of the Alliance for Good Government and a long time friend of the lieutenant governor, says if given to choose, “I think he (Landrieu) is going to run for governor…Blanco is toast.”

Yet the Times says that state officials are divided about having an election:

State politicians are divided over postponing the New Orleans election.

“My gut tells me that we don’t have it organized enough right now,” said State Representative Karen R. Carter, a Democrat who represents parts of Downtown New Orleans and the French Quarter. “However, my people tell me that they may be interested in new leadership.”

Others suggested that the election could be a milestone.

“The majority of people that I’ve heard, they want the elections to go on,” said State Representative Austin J. Badon Jr., a Democrat who represents New Orleans East. “They feel as though this is their constitutional right.”

With many of New Orleans’ black residents unable to return and to vote, just how constitutional will this right be come February?

Mister, "Can you spare a gallon?" Part 1