Israel and the US have warned Syria for proliferation of chemical weapons to its ally Hezbollah in Lebanon. Syria has also been warned to prevent its stockpile of chemical weapons to fall into the hands of rebels or worse, the jihadists fighting alongside the rebel forces. During recent days, Israeli drones were seen flying above Lebanon and Syrian territory. This past night the IAF executed a bombing raid and targeted a weapons research center near Damascus. Not only Syria has strongly send protests about intrusion of its sovereign state, also Iran and especially Russia send a strong statement this action was unacceptable. Russia has warned there would be repercussions when any foreign state would attack Syria.

The Syrian civil war has just been handed further international dimension, an escalation no one benefits at this crucial moment. Apparently Obama gave his blessing to Israel’s attack before the strike was executed. All the chatter had a basis for truth in it after all, to my surprise. Netanyahu has gotten his focus on national security back where he had lost the focus due to the surprise results in the recent election. Netanyahu 3, Obama 0. Speaking of pre-empting any change in US foreign policy in the Middle-East. Obama is clearly not the one who will have the initiative on policy as the Arab winter settles across North Africa and Israel takes the lead in the region as it has done throughout its 65 year history.

There are two story lines put out in the media, an attack on an arms convoy transferring Russian SA 17 missile launchers to Hezbollah in Lebanon and the attack on Syria’s weapons research center.

(JPost) – Although details are still sketchy, Wednesday’s reported air strike appears to have targeted a military research center near Damascus – a center that fits the definition of Syria’s Scientific Studies and Research Center, known by its French acronym, CERS.

Syrian state television said Israel had hit “scientific research centers aimed at raising the level of resistance and self-defense,” a description that fits well with CERS, which has been labeled a state organization responsible for developing biological and chemical weapons and transferring them to Hezbollah and Hamas.

Back in 2010, Brig.-Gen. (res.) Nitzan Nuriel, a former director of the National Security Council’s Counter-terrorism Bureau, issued a warning to the international community, saying CERS would be demolished if it continued to arm terrorist organizations. The facility has long been on Israel’s radar as a top national security threat.

(NTI) – In 2005, U.S. President George W. Bush issued Executive Order 13382: “Blocking Property of Weapons of Mass Destruction Proliferators and their Supporters,” which placed the SSRC on the U.S. Treasury Department’s Specially Designated Nationals list and prohibited U.S. citizens and residents from doing business with the SSRC. [8] In 2007, the U.S. Treasury Department froze the assets of other SSRC subsidiaries, listing SSRC as the “Syrian government agency responsible for developing and producing non-conventional weapons and the missiles to deliver them.”[9] The suspicions mostly revolved around the proliferation of chemical and biological weapons and ballistic missiles.

(Guardian) – ‘Scientific research centre’ north-west of Damascus was damaged in attack, according to Syrian state TV.

Syria’s ambassador to Lebanon has said Damascus has the option to respond to what it says was an Israeli air strike on a research centre on the outskirts of the Syrian capital on Wednesday. Syria could take “a surprise decision to respond to the aggression of the Israeli warplanes”, Ali Abdul Karim Ali was quoted as telling a Hezbollah-run news website.

Syrian state television said the country’s military command had confirmed a “scientific research centre” north-west of Damascus had been struck at dawn on Wednesday, causing damage. Two people were killed and five wounded in the attack on the site, it said, which was engaged in “raising the level of resistance and self-defence.”

A Lebanese army statement said: “Four Israeli planes entered Lebanese airspace at 4.30pm on Tuesday. They were replaced four hours later by another group of planes, which overflew southern Lebanon until 2am, and a third mission took over, finally leaving at 7.55am on Wednesday morning.”

When Do We Attack Iran? 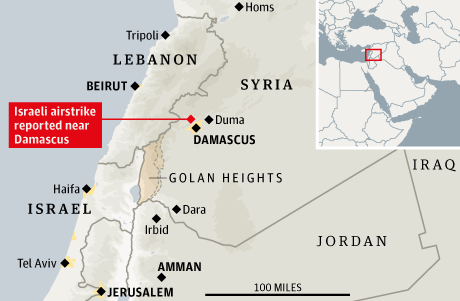 . White House warns Syria over ‘weapons to Hezbollah’ (BBC News) – The White House has warned Syria not to transfer weapons to Hezbollah in neighbouring Lebanon. The warning came amid contradictory claims of an Israeli strike in Syria. Israel has maintained silence about the incident, but Syria has made a formal complaint to the UN. Syria says Israeli war planes bombed a military research centre north-west of Damascus, but the US and others say lorries carrying weapons bound for Lebanon were hit. Damascus says it reserves the right to defend itself, while its allies Russia and Iran have strongly… Read more »