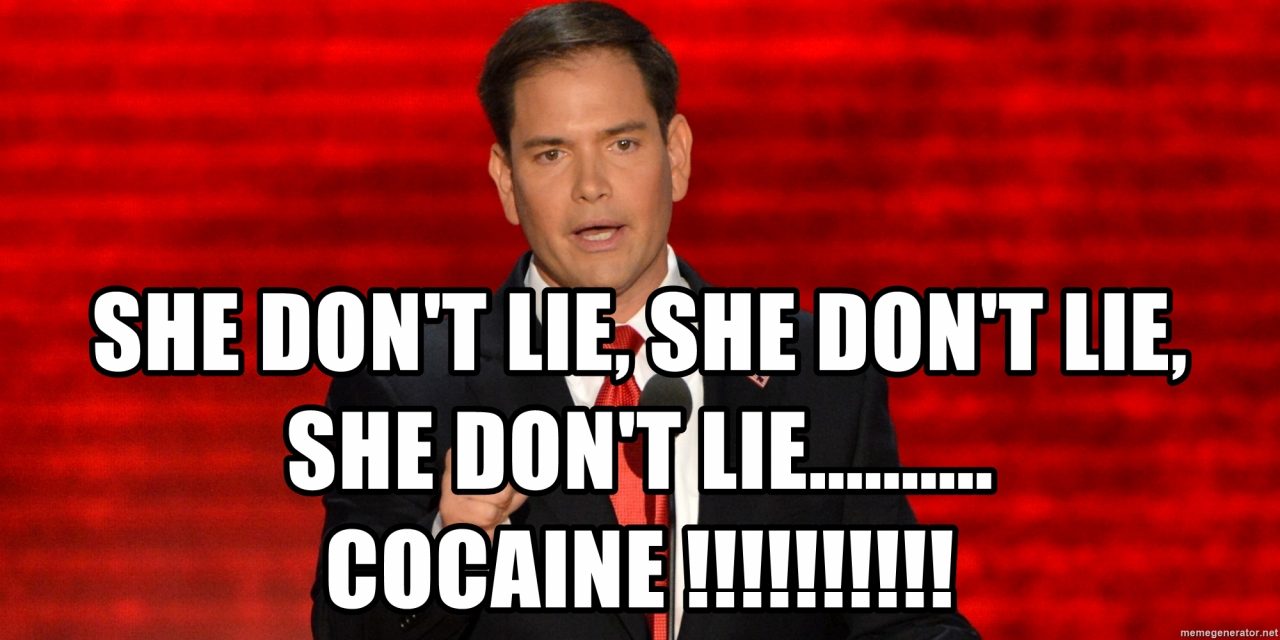 When you see a headline like this [How Rubio helped his ex-con brother-in-law acquire a real estate license] in the Washington Post, you figure that you’re about to read a very long and sordid exposé. That’s not really what Post reporters Manuel Roig-Franzia and Scott Higham delivered in this case, though. Their piece has enough substantiation to justify the headline, but it doesn’t delve too deeply into the greater meaning and it leaves the most important question unanswered.

Let’s start with the fact that “ex-con” doesn’t really do justice to Marco Rubio’s brother-in-law. Orlando Cicilia was a major drug trafficker at a time and in a place that has gone down in history in movies like Scarface and television programs like Miami Vice for being notoriously violent and destructive.

According to public records, Cicilia was arrested after federal law enforcement seized the Miami home where he lived with Barbara Rubio, Senator Rubio’s sister. Barbara Rubio was not arrested or indicted. Cicilia was sentenced to 25 years in prison for conspiracy to distribute cocaine and marijuana.

The arrest was part of “Operation Cobra,” a federal crackdown on a Florida drug smuggling ring that killed a federal informer and chopped up his body, according to a NYT story published at the time. The story reports that the ring, led by Cuban American Mario Tabraue, paid $150,000 in bribes to the Key West police chief and Miami-Dade county officials, and used Miami police officers to collect, count, and disburse drug profits.

About that part where they killed a federal informer and chopped up his body, the New York Times reported on December 17th, 1987:

The authorities said that in July 1980, members of [Cicilia’s drug ring] apparently became aware that Larry Nash was an informer for the Bureau of Alcohol, Tobacco and Firearms.

“Mr. Nash was murdered and mutilated,” Mr. Dean said. “His body was cut up with a chain saw and then burned.”

This drug ring reportedly did $75 million of business trading in marijuana and cocaine, of which Cicilia was personally responsible for $15 million. That’s a lot of cocaine and a lot of ruined lives, and the way they operated, it was a lot of violence, intimidation, and the cause of a shameful amount of public corruption.

To call this man merely an “ex-con” doesn’t capture the scope of his crimes.

When Cicilia was arrested, Marco Rubio was sixteen years old, and he can’t be held accountable for what his sister’s boyfriend and eventual husband did for a living. That his sister and the family stayed loyal to this man throughout his incarceration and welcomed him back into their lives and homes when he was released is admirable in its own way. When you look at the totality of the circumstances with this case, the Rubio family deserves a degree of credit for loyalty and a willingness to forgive. Orlando Cicilia served his time and he ought to be afforded the opportunity to demonstrate that he’s been rehabilitated.

Still, this was a choice. It was a choice to essentially overlook the immense damage done by Cicilia and his gang to countless individuals and to the integrity of the local government and law enforcement institutions.

We have to balance the good and the bad here, and that’s the context with which we should judge the following:

When Marco Rubio was majority whip of the Florida House of Representatives, he used his official position to urge state regulators to grant a real estate license to his brother-in-law, a convicted cocaine trafficker who had been released from prison 20 months earlier, according to records obtained by The Washington Post.

In July 2002, Rubio sent a letter on his official statehouse stationery to the Florida Division of Real Estate, recommending Orlando Cicilia “for licensure without reservation.” The letter, obtained by The Washington Post under the Florida Public Records Act, offers a glimpse of Rubio using his growing political power to assist his troubled brother-in-law and provides new insight into how the young lawmaker intertwined his personal and political lives.

Rubio did not disclose in the letter that Cicilia was married to his sister, Barbara, or that the former cocaine dealer was living at the time in the same West Miami home as Rubio’s parents. He wrote that he had known Cicilia “for over 25 years,” without elaborating.

The Rubio campaign responds that it would have been worse if he had revealed his conflict of interest because revealing that Cicilia was his brother-in-law and was living with his parents would have put undue pressure on the members of the Florida Division of Real Estate. This is because, as majority whip of the Florida House of Representatives, he had “significant influence” over the Division’s budget.

That’s a defense, certainly, but a poor one. Rubio had two truly defensible options. He could have refused to write the letter because of the obvious conflict or he could have fully disclosed it and let the chips fall where they may. He chose to hide the conflict, and that was the wrong decision.

The Post reveals some additional information about how Rubio has helped his brother-in-law, including using him as a realtor and funneling “more than $130,000 in the past decade” to Cecilia’s two sons through various PACs and campaign coffers.

But that’s not the most troubling question here. This is:

Rubio also declined to say whether he or his family received financial assistance from Cicilia, who was convicted in a high-profile 1989 trial of distributing $15 million worth of cocaine. The federal government seized Cicilia’s home; the money has never been found.

I don’t know how much money was left over after the lawyers got paid, but it’s safe to assume that “the money [that] has never been found” was significant and became part of the Rubio family’s assets.

I have mixed feelings about how this story should be treated. In almost all cases, I favor forgiveness and a helping hand to felons who do their time and pay their debt to society. I don’t look unkindly on families that stick together and remain loyal to members who fall into addiction or crime.

But major drug kingpins are a little different than your garden-variety felon. People who trade in lethal addictive drugs like cocaine and heroin have such a depraved indifference to the death they cause that I have a hard time being forgiving, and this is especially true for major traffickers who are involved at least tangentially in murder, bribery and the corruption of public officials.

That Marco Rubio is not only a public official but is seeking the highest office in the land just puts this in a category of its own. I can’t strongly condemn anything Rubio is proven to have done, but neither can I really trust him, either.

This is definitely a legitimate story and something all voters should know about so that they can weigh the facts in a full and fair context. And, to be fair, Orlando Cicilia did his time. I don’t see anything wrong with him having a real estate license. I don’t care that Rubio used him as a realtor. It doesn’t really bother me that Rubio has employed his sons in his campaigns, although I hope they did some actual work.

On the other hand, I would like to be able to believe that Rubio’s whole political career wasn’t made possible by bloody cocaine money that was never recovered when Cicilia was arrested back in 1987.

Unfortunately, that possibility is an open question.

Why is McConnell Helping Biden Advance a Transportation Bill?

Why did John Ashcroft Cloak the Statues of Justice?