How MI-7 Fake News in 1917 Impacted the Nazi Genocide

Why does this story remind me of the UK/USA plot to enter the Iraq War under false pretences? Spooks of any nationality are not to be trusted, not now, not ever! The Bush years and USA as a Lie Factory.

○ German BND and the Iraq plot of Curveball
○ Miller, Mylroie, and the Anti-Saddam Wurlitzer: A Thirteen Year Odyssey by BooMan on Oct. 17, 2005

Oh never mind, today the USAsians are once again gullible on Syria and Ukraine. Do I need to throw in the Vietnam War and the Gulf of Tonkin false flag attack, or the incubators and the invasion of Kuwait by Iraq forces in 1990.

Fake news, false stories that masquerade as real news are not new.

In the spring of 1917 some of Britain’s most influential newspapers published a gruesome story that has been called “the master hoax” – and I think we finally have proof about where it came from. Britain was at the time trying to bring China into the war on the Allied side.

In February a story appeared in the English-language North China Daily News that claimed the Kaiser’s forces were “extracting glycerine out of dead soldiers”. Rumours about processing dead bodies had been in circulation since 1915 but had not been presented as facts by any official source.

That changed in April when the Times and the Daily Mail published accounts from anonymous sources who claimed to have visited the Kadaververwertungsanstalt, or corpse-utilisation factory. The Times ran the story under the headline Germans and their Dead, attributing the claim to two sources – a Belgian newspaper published in England and a story that originally appeared in a German newspaper, Berliner Lokal-Anzeiger on 10 April.

That German account by reporter Kal Rosner described an unpleasant smell “as if lime was being burnt” as he passed the corpse factory. Rosner used the word “kadaver”, which referred to the bodies of animals – horses and mules – not human bodies.

Later, The Times carried a longer article quoting from an unnamed Belgian source who described in grim detail how the corpses were processed. 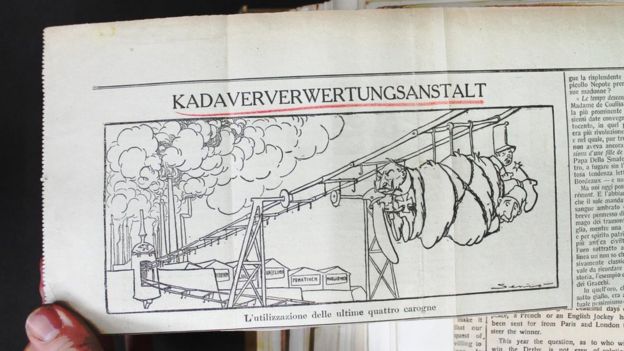 It was in 1925 that Sir Austen Chamberlain admitted, in a Commons statement, there was “never any foundation” for what he called “this false report”.

In the same year the Conservative MP John Charteris – who served as head of intelligence – reportedly admitted, while on a lecture tour of the US, that he had fabricated the story.

In 1917 MI7 employed 13 officers and 25 paid writers, some whom moonlighted as “special correspondents” for national newspapers. One of their most talented agents was Major Hugh Pollard who combined his work in the propaganda department with the role of special correspondent for the Daily Express.

After the war Pollard confessed his role in spreading the corpse factory lie to his cousin, Ivor Montague.

But lies have consequences. During the 1930s the corpse factory lie was used by the Nazis as proof of British lies during the Great War. Historians Joachim Neander (Germany) and Randal Marlin (Canada) remind us how these false stories “encouraged later disbelief when early reports circulated about the Holocaust under Hitler”.

Media and Propaganda: The Northcliffe Press and
the Corpse Factory Story of World War I

Demonization of Germans was an early feature of British propaganda in World War I, with numerous atrocities reported in the Bryce Report, 1915. But in April, 1917, a particularly gripping, gruesome, and odium-inducing tale was given credence by the press of Lord Northcliffe, notably The Times and The Daily Mail. These papers seemed to provide convincing proof that the Germans boiled down corpses of their own soldiers for the purpose of producing useful products such as fats, bone meal, pig food and the like.

The story is well known, but significant details have been obscured or misrepresented with regard to the way in which it came to be so widely believed. Our purpose here is to straighten out key elements of the record, based on archival findings, and to draw attention to the techniques employed to ensure widespread credence in this false tale. These techniques, and the principles behind their use, have recent and contemporary parallels, some of which are drawn in this paper.

The Corpse Factory story succeeded in its goal, but may have made a lasting peace more difficult. Also, official repudiation of the story in 1925 encouraged later disbelief when early reports circulated about the Holocaust under Hitler, thus contributing to the early lack of response by nations asked to accept Jewish refugees.

One of Sirocco’s best! Damn … how I miss the Old Days here at the Pond.

And the Anglo-Saxon bust of Winston Churchill has been carried back into president Trump’s White House. His home needs some exterior decoration in the Rainbow colors if tolerance and inclusiveness!

Addendum: below the fold …

[In flagrant contradiction to Martin Longman‘s request to stop harassment of downratings, nalbar continues the bullying.
I will once again limit comments and look for timely posting of diaries. McCarthyism revived. 🙁 ]