Is Trump the Black Knight or the Dead Parrot?

There is a scene in Monty Python and the Holy Grail in which King Arthur has a sword battle with the Black Knight. After Arthur cuts off the Black Knight’s left arm, the Knight responds that it is just a scratch. After Arthur cuts off his right arm, the Knight says it is just a flesh wound. Arthur proceeds to cut off both of the Knight’s legs, but the Knight wants to continue the fight, “Come back here and take what’s coming to you…. I’ll bite your legs off!”

Donald Trump is more and more resembling the Black Knight. He lost his National Security Adviser after twenty-four days. His good friend Keith Schiller left his position as the Director of Oval Office Operations in September. Hope Hicks announced that she will soon be leaving this week. And its looks pretty clear that Jared Kushner is going to have to leave the White House soon, along with his wife Ivanka.

To be sure, there’s a much longer list of people close to the president who have departed from the White House, including Omarosa Manigault. Trump’s svengali, Steve Bannon, has departed. Even RNC loaners, Reince Priebus and Sean Spicer are long gone.

But it’s the loss of his daughter and son-in-law, and the loss of Hope Hicks, that will leave the president truly isolated. He won’t have family, or people from the Trump Organization, or anyone other than Kellyanne Conway from the top of his campaign, or very many people even from the team he put together to help him run the White House.

I think it’s also a safe bet that his wife isn’t too friendly as of late.

Add to this that he clearly wants his Secretary of State and Attorney General to quit. He’s about the fire H.R. McMaster, his current National Security Adviser. He’s warring with the FBI and the Intelligence Community in general. He seems inclined to fire his chief of staff. His top economic adviser Gary Cohn is probably walking out the door.

All of this is ugly enough, but of course his campaign chairman and deputy chairman have been charged with felonies. He has several people cooperating with the Special Counsel, including Michael Flynn, Rick Gates, George Papadapoulos, and probably Sam Clovis.

But, just like the Black Knight, Trump sustains all these wounds and still talks a lot of smack. He’s been dismembered, piece by piece, and he yells, “Oh, oh, I see, running away, ‘eh? … You yellow bastards!”

In the Monty Python movie, the Black Knight is left to bleed to death and forgotten. That’s not an option in real life because Trump remains, for now, the president of the United States.

Trump may think he’s only suffered scratches and flesh wounds, but to this outside observer his wounds are beginning to look mortal.  And the headlines today reflect this:

That’s only a sample of the seriously consequential bad news for Donald Trump in this morning’s newspapers.

And what’s the president worried about this morning?

Alec Baldwin, whose dying mediocre career was saved by his terrible impersonation of me on SNL, now says playing me was agony. Alec, it was agony for those who were forced to watch. Bring back Darrell Hammond, funnier and a far greater talent!

How long before we’re told that Donald Trump’s political career isn’t dead and that he’s just “pining for the fjords”?

Not Ready To Make Nice

If he ends up talking to Mueller, who we might call “The Keeper Of The Bridge of Death”, Trump might get hit with, “You must answer me these questions three, ere the other side you see”.  I am guessing if that happens, Trump will most certainly end up being cast into the Gorge of Eternal Peril. 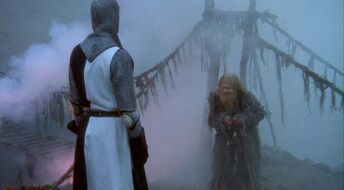 Or succumbing to the killer bunny.

I know I wouldn’t trust him with the holy hand grenade.

I’m betting that Kelly Anne Conway weighs the same as a duck.

Does that means she floats?

Some reading of Gibbon’s Decline and Fall… will probably yield a couple of possible thriller plots and what’s likely going to come next.

Seriously, though, is this the point at which we should start looking for Trump to rage quit?

Although I shouldn’t be, at this point, I was actually shocked that Baby-faced Jared actually got the Saudis to blockade Qatar out of spite for their refusing to prop up his failed real estate business (or at least that’s what’s being alleged and what evidently what the Qataris were going to discuss with Mueller). But will Javanka leave the WH even if they effectively have nothing to do all day? Seems to me that’s up to Trump and nobody else. But, if they do leave, along with Cohn and McMasters, the Trump Administration is going to look very precarious. Dangerous… Read more »

The litany of trump miscalculation and atrocity is all well and good. Shame half of America pays no attention to any type of news what so ever while a good portion of them listen to drive time fascism. Many fiddles fiddling, etc.

Trump reminds me of the old soldier who protested:

Except that Trump isn’t an old soldier, he’s just an old fart.