Pelosi Capitulates on Border Funding After Being Put in a Vise

On Thursday, Speaker Nancy Pelosi felt compelled to the capitulate to the White House on the border supplemental spending bill. A revolt from within her own caucus was the cause. With the Senate insisting on their own bill and the July 4 recess looming, moderates and “problem-solvers” on the Democratic side were unwilling to engage in a game of chicken or go home without emergency funding having been appropriated.

Pelosi announced that she will pass the Senate bill without amendments and then had a preliminary vote on the rule.

A sign of the dissatisfaction on the left: More than 70 House Democrats voting against the rule governing floor debate on the Senate-passed border spending bill. Majority party typically votes in unison for a rule

This exposed a massive division on the left, as liberals and progressives strongly objected to giving the White House this money without more strings attached to assure that it is spent on people in need rather than on more brutal enforcement practices.

That’s a reference to Reps Debbie Dingell of Michigan and  Josh Gottheimer of New Jersey.  Gottheimer represents an historically Republican district in the affluent New York City suburbs. Evidently, he didn’t like the politics of withholding funding in an effort to force compromise. He was speaking for a good number of other Democrats in similarly precarious districts.

This blowup is a good indicator of the divide on immigration that exists in this country, as there are Democrat-held districts where Trump’s policies are popular and others where they’re considered an abomination.  Pelosi was caught in a vise between them, which is exactly where the Republicans want her to be.  In this case, she sided with the people most likely to lose and cost her the majority, but it caused seventy members to defy her rule, which is a punishable offense.

This was definitely a good day for the GOP, as they got what they wanted an did some real damage to the unity of their opponents. It’ll be interesting to see who, if anyone, defends Pelosi’s decision in the debate on Thursday night. 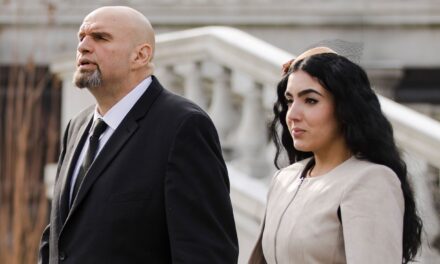 Why Fetterman Crushed It, And What It Means