Did free trade kill off neanderthals?

Other than my happy story diaries, most of my diaries on DailyKos and Booman Tribune are really bleak.

Dire predictions of flu pandemics, global warming creating catastrophic environmental disasters, the growing theocracy threat, the death of an infant because the heat was turned off at her home, the possible murder of an investigative journalist.

Maybe this one is a little less bleak. At least, the deaths all occurred a really, really long time ago. 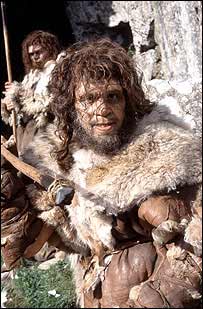 More on the jump.

So here’s a new theory put forth by economists in the “Journal of Economic Organization and Behavior”:

“After at least 200,000 years of eking out an existence in glacial Eurasia, the Neanderthal suddenly went extinct,” writes University of Wyoming economist Jason Shogren, along with colleagues Richard Horan of Michigan State University and Erwin Bulte from Tilburg University in the Netherlands. “Early modern humans arriving on the scene shortly before are suspected to have been the perpetrator, but exactly how they caused Neanderthal extinction is unknown.”

Creating a new kind of caveman economics in their published paper, they argue early modern humans were first to exploit the competitive edge gained from specialization and free trade. With more reliance on free trade, humans increased their activities in culture and technology, while simultaneously out-competing Neanderthals on their joint hunting grounds, the economists say.

Archaeological evidence exists to suggest traveling bands of early humans interacted with each other and that inter-group trading emerged, says Shogren. Early humans, the Aurignations and the Gravettians, imported many raw materials over long ranges and their innovations were widely dispersed. Such exchanges of goods and ideas helped early humans to develop “supergroup social mechanisms.” The long-range interchange among different groups kept both cultures going and generated new cultural explosions, Shogren says.

Anthropologists have noted how judicious redistribution of excess resources provides a distinct advantage to “efficient hunters” as measured by factors such as increased survivorship, social prestige, or reproductive opportunities, the researchers say.

“One of the striking features of the archaeological record is that Neanderthal technology was nearly stationary for many thousands of years whereas technology of early humans experienced many innovations,” Shogren says.

He says the evidence does not support the concept of division of labor and trade among Neanderthals. While Neanderthals probably cooperated with one another to some extent, the evidence does not support the view that specialization arose from any formal division of labor or that inter- or intra-group trade existed, he says. These practices seem to require all the things that Neanderthals lacked: a more complicated social organization, a degree of innovative behavior, forward planning and the exchange of information, ideas and raw materials.

“Basic economic forces of scarcity and relative costs and benefits have played integral roles in shaping societies throughout recorded human history,” Shogren says. “No reason exists today to discount either the presence or potential impact of economics in the pre-historic dawning of humanity.”

OK, so this diary is kind of depressing too. Don’t get me wrong, I’m glad homo sapiens won (Go team!). But it’s too bad another species paid the price of our free trade practice and dominant success.

A Provincial Tale of Politics and Revenge

We must LEAVE Iraq. NOW.

New Abortion Bills in Georgia (they’re on a rampage)

Reality-based commentary on the budget deficit