.
Did U.S. Central Command receive new orders from civilian top at the Pentagon?

BAGHDAD Nov. 15, 2005 — More than 170 malnourished detainees found at an Interior Ministry detention centre in Baghdad appear to have been tortured, the Iraqi prime minister says.

The announcement by Prime Minister Ibrahim al-Jaafari, came two days after US troops surrounded and took control of an Interior Ministry building in the Baghdad neighbourhood where the detainees were found.

“I was informed that there were 173 detainees held at an Interior Ministry prison and they appear to be malnourished. There is also some talk that they were subjected to some kind of torture,” al-Jaafari told reporters. Al-Jaafari said said an investigation had been launched.

An Iraqi Interior Ministry official also said that an investigation will be opened into allegations that ministry officers tortured suspects detained in connection with the country’s on going fight against the foreign military presence in the country.

Al-Jaafari said the detainees were moved into a better location and “medical care will be given to them”.

The BBC’s Caroline Hawley in Baghdad says the discovery will not come as a surprise to many Iraqis. There have been persistent allegations of abuse by members of the Shia-dominated security forces, our correspondent says.

But Sunday’s discovery is hard evidence and officials believe it may be the tip of the iceberg. 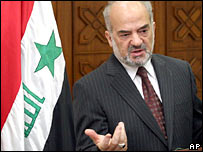 There are suspicions the building may also have been used as a base for a militia called the Badr Brigade, which has links to senior government officials, our correspondent adds. The facility is reported to be in the central Jadiriya district of Baghdad.

BBC NEWS: VIDEO AND AUDIO
Hear more details on the detainees that were found

Iraq Inquiry Says Detainees Appear to Have Been Tortured

NYT (AP) Nov. 15 — “According to our knowledge, regrettably, all the detainees were Sunnis,” Mohsen Abdul-Hamid, head of the Iraqi Islamic Party, told The Associated Press. “In order to search for a terrorist, they used to detain hundreds of innocent people and torture them brutally.”

Most insurgents are Sunni Arabs, who were dominant under Saddam Hussein’s regime but lost power after his ouster.

The Interior Ministry is controlled by Shiites. Sunni leaders have accused Shiite-dominated security forces of detaining, torturing and killing hundreds of Sunnis simply because of their religious affiliation.

The U.S. Embassy issued a statement late today saying that both Ambassador Zalmay Khalilzad and Gen. George Casey, the top U.S. commander in Iraq, had discussed the case “at the highest levels” of the Iraqi government. “We agree with Iraq’s leaders that the mistreatment of detainees is a serious matter and totally unacceptable,” the statement said.

The Pentagon spokesman said the discovery at the facility “was clearly something that was concerning, and was appropriately looked into by the Iraqi forces with the support of the coalition.” He said it was not a U.S. military-run facility and that he does not believe the American military was involved in the investigation.

Amnesty International also said it had recently received information of four people who were tortured while detained by Iraqi security forces. 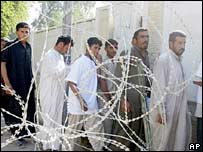 . Posted earlier in BooMan’s diary :: An Iraq Exit Strategy From start of your discussion on thread :: Why We’re Talking About Impeachment But unlike in Vietnam, the active insurgency against the government (not necessarily against us) represents a minority (the Sunnis).  Therefore, the weight of the population has an interest in preserving the new government, if for no other reason than to provide some security. The  majority of Iraqis want the U.S. Forces out of the country NOW! March 17, 2005 — An opinion poll conducted in Iraq recently by Zogby International showed that 82 per cent of… Read more »

Re your BBC-link on mass arrests.  Also covered by MSNBC: UNITED NATIONS – The Iraqi army and multinational forces violated international law during military operations in western Iraq last month by arresting doctors and occupying medical facilities, a U.N. report said Monday. The five-page report, from the U.N. Assistance Mission in Iraq, said military operations by the two forces had “a negative impact on human rights” and cited figures that more than 10,000 families have been displaced in two restive provinces — Anbar and Nineveh — alone. Covering the period of Sept. 1 to Oct. 31, it said the United… Read more »

today – this line is particularly chilling:

officials believe it may be the tip of the iceberg.

If this is, and it seems to be, pretty common knowledge around Iraq, why haven’t any of our hard-working war correspondents reported it? Is this Interior Ministry in the “green zone”?

There were some reports out along the way about training problems and human/civil rights abuses of prisoners. The whole place is one mistake after another. Nonetheless, while the Iraqi army seems to be getting up to speed, the training of the 142,000-member police force -- about half the total security forces supposedly needed -- is moving more slowly and fraught with bigger problems than reports by U.S. officials might suggest (see Slide Show: "Inside Iraq's Police Boot Camp"). On Apr. 4, insurgents kidnapped a senior Iraqi police official in broad daylight. A bomb near Kirkuk killed at least nine… Read more »

and read descriptions of the kind of torture carried out by the Diem regime. Here we find the same methods in Iraq 2005 although we still await the first report of the deliberate destruction of female reproductive organs. How many times and by how many people has it been said that nothing happens in Iraq without the US allowing it or authorzing it? Different time. Different client regime. Same result.  Reports also seem to indicate that most Iraqis have at least suspected this kind of behaviour for a long time. A critical question may also be why was it discovered… Read more »

The trends I notice in circumstances like this one is that one of the guilty parties might be trying to get out ahead of the story by leaking it first. That way they have more control of the first impression.  If it’s a true whistleblower event then I usually look to something/someone related by a few degrees of seperation. It could be different but usually this only happens (Iraq-recent) when someone else has something to gain and they want others out of the way.   I was reading some newsgroup postings and found a transcript of a show interview… Read more »

I found an article from ABC news US distances soldiers from secret Baghdad prison and this part jumped out at me The United States Government says it does not believe American soldiers were involved in the Iraqi prison where more than 170 detainees were found starving and mistreated. US troops took control of an Interior Ministry building in Baghdad on the weekend and found the traumatised prisoners inside. Investigations into the abuse have started, but US State Department spokesman Adam Ereli says the prison was controlled by Iraqi forces not Americans. "There's no issue of American involvement in this. Were… Read more »

Taken from the BBC story:

Deputy interior minister Hussein Kamal, who saw some of the abuse victims personally, said: “I’ve never seen such a situation like this during the past two years in Baghdad, this is the worst.

“I saw signs of physical abuse by brutal beating, one or two detainees were paralysed and some had their skin peeled off various parts of their bodies.”

This is fucking outrage! Like it or not, the USA is responsible for these actions because they are the occupying country.

Whoops! Link to the BBC story

Somebody needs to grab Chalabi out of one of the meetings with Rice-Cheney and have him testify while he’s in town.

Does the procedure exist to do something like that?

I would suspect that as a foreign ‘diplomat’ he has immunity from prosecution, or arrest in the US.

I figured he would have that protection. I’m wondering if it could be some matter of accountability questioning  procedure tied to the funding or something. Chalabi is one of the main Ministry officials there isn’t he? Isn’t he referred to as Prime Minister or future Prime minister?

What about hauling in the ones responsible for training the guards, the private contractors? US funds have paid that bill.

Somebody needs to grab Chalabi out of one of the meetings with Rice-Cheney and have him testify while he’s in town.

Does the procedure exist to do something like that?

I believe there is…
It is called RENDITION…

Chalabi would end up owning the building he’s sent to and would likely persuade his interrogators to defect.

If ever there were people to portray the ‘deal with the devil to ensure material success on earth’ it would be Chalabi and several of the neocons. Stuff like this just reinforces the select ‘Illuminati chosen ones’ lore.

Something that is documented from the past and supported by many of the diehards in power is the use of mind control-psyops-  establishing loyalty/control through torture and abuse.

. Posted earlier in diary by Carnacki :: The Man Responsible for the Iraq War Is ID’ed You Want To Go To College?   ««  click on pic for story I Need You To Kill Some Iraqis! Enlistment has become a choice of morality, not of being patriotic to your country. The surge of men and women joining the U.S. Armed Forces after the attacks of 911 has ended – see Pat Tillman. BTW it is always a moral choice, and depends on trust in leadership and your government. The Vietnam War depended also on telling the American people as… Read more »

Thx Oui, as always, for providing us with comprehensive research.

Sunni Arab politicians demanded an international investigation on Wednesday into allegations that Shi’ite militias linked to Iraq’s Interior Ministry tortured and abused prisoners in a secret Baghdad bunker. The underground bunker, near the ministry’s compound in central Baghdad, was discovered by U.S. troops during a raid on Sunday night in a development likely to fuel sectarian tensions ahead of December 15 parliamentary elections. Inside they found 173 malnourished and in some cases badly beaten men and teenagers, some of whom showed signs of having been tortured, Prime Minister Ibrahim Jaafari said on Tuesday as he ordered an investigation into the… Read more »

. Sunnis Demand Abuse Inquiry Interior Ministry ‘Prison’ “I saw signs of physical abuse by brutal beating, one or two detainees were paralyzed and some had their skin peeled off various parts of their bodies.” Hussein Kamal, Deputy Interior Minister Iraqi Prime Minister Ibrahim Jaafari has ordered an investigation. Washington is backing the Iraqi inquiry – but the US is itself facing pressure to be more transparent about the treatment of its prisoners. The Iraqi abuse allegations came to light when prisoners, many malnourished and some showing signs of apparent torture, were found by US troops on Sunday. I saw… Read more »