GAZA CITY (BBC News) June 13 — An expert working for the Human Rights Watch said the Palestinians’ injuries were not consistent with a blast taking place beneath them. “It has been suggested by some that the family was killed by a land mine, and this is patently not the case,” Mark Garlasco¹ said.

“All of the evidence is pointing to a 155mm shell as having killed and injured the Palestinians here on the beach,” he said. “My assessment [is] that it’s likely that this was incoming artillery fire that landed on the beach and was fired by the Israelis from the north of Gaza.” 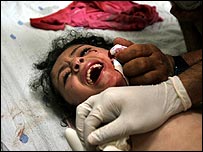 Reacting to earlier reports that the Israeli inquiry would blame the blast on a mine planted by Hamas, a Hamas spokesman accused Israel of “shying away from its responsibilities over this atrocious crime”.

“These Israeli allegations are false and lack any credibility,” Ghazi Hamad said.

See my recent diary :: No News for America

NORTH GAZA (BBC News) June 13 — The BBC’s Alan Johnston in Gaza says although Israeli strikes on vehicles travelling through the territory have become familiar, today’s attack resulted in one of the heaviest death tolls.

The dead were reported to include two brothers, four-year-old Hisham al-Mugrabi and eight-year-old Shaher, and their father Ashraf.

Israeli Defence Minister Amir Peretz said Israel had so far been showing restraint, but would no longer do so. Israel says about 100 rockets have been fired from across the Gaza border in the past few days.

N.C. pastor stands by sign saying Koran should be flushed

from The Progressive: . . . But what about Hamas’s hateful political ideology? How could Israel anyway trust it, let alone attempt to make peace with such an entity? In a June 8 op-ed in the Financial Times, somebody as thoroughly a part of the foreign policy establishment as Henry Siegman, senior fellow at the Council on Foreign Relations and director of its U.S./Middle East Project, provides an answer. The important thing, he says, is not Hamas’s belief system but its actual record over the recent past. Siegman quotes in support Efraim Halevy, somebody who headed the Mossad under five… Read more »