Diplomacy Gaining Support in ME

In a new round of diplomacy aimed at ending the fighting in the Middle East, envoys from three European countries are holding talks in Israel. Among them is German Foreign Minister Frank-Walter Steinmeier who has already met with high-ranking Israeli officials and is due to hold talks with Palestinian President Mahmoud Abbas before returning to Germany.

During a stop in Beirut Howell said the British government is starting to question Israel’s tactics.

US Secretary of State Condeleesa Rice is travelling to the region, expecting to join her British, French and German counterparts later in the day.

More than 100 Palestinians have been killed

GAZA CITY (AFP) July 21 — Israel has been waging a similar offensive against the Gaza Strip since the capture of a soldier in June by Palestinian militants including the armed wing of the governing Hamas movement. More than 100 Palestinians have been killed.

Israel said it supported the deployment of an international force as part of the eventual solution to the crisis.

It has previously said that it was “too early” to consider such a force, which would be in addition to the UN peackeeping force that has been monitoring the volatile border for 28 years.

“Israel sees the possibility of deploying a multinational force (in south Lebanon) with a strong mandate. The force would possibly be a NATO force,” Defense Minister Amir Peretz told reporters after meeting Germany’s foreign minister. 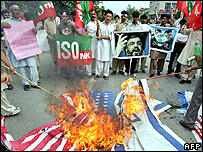 Crises like these often inflame anti-
American and anti-Israeli feeling


Wieczorek-Zeul also served as development minister under the previous government

Germany’s minister views the Israeli reaction to Hezbollah’s attacks as completely inappropriate — and demands an immediate end to the bombings. She knows from opinion polls that at least three quarters of the German population agree with her. The three opposition parties — the free-market liberal FDP, the Greens and the Left Party — have also criticized the Israeli action, albeit in different ways.

Mr Egeland, the UN’s emergency relief chief, described the destruction as “horrific” as he toured the city. He has condemned the devastation caused by Israeli air strikes in Beirut, saying it is a violation of humanitarian law.

Mr Egeland arrived hours after another Israeli strike on Beirut. Israel also hit Sidon, a port city in the south crammed with refugees, for the first time.

«« click for a panorama view
BBC NEWS: destruction of Beirut in pictures

Mr Egeland arrived in southern Beirut on Sunday just hours after Israeli strikes on the ‘Hezbollah stronghold’, and the ruins of high-rise apartment blocks were still smouldering. A visibly moved Mr Egeland expressed shock that “block after block” of buildings had been levelled.

Mr Egeland appealed for both sides to put a halt to attacks. He said UN supplies of humanitarian aid would begin to arrive in the next few days. “But we need safe access,” he said. “So far Israel is not giving us access.”

Israel has said it will lift its blockade on Beirut’s port to allow aid through, but correspondents point out that roads, bridges and trucks have all been targeted by the Israeli air force, making it extremely difficult for aid supplies to reach regions where they are most needed.

Israeli warplanes hit minibus, killing 3
Hezbollah rockets kill 2 in Israel
The stricken minibus was carrying 16 people fleeing the village of Tairi, working their way through the mountains for the southern port city of Tyre. A missile hit the bus near the village of Yaatar, killing three and wounding the rest, security officials said. The wounded were taken to hospitals in Tyre.

Rich man can ride and the hobo he can drown

Why Liberal Dems voted NO on the Tax Bill

Must be the New Italian Shoes being brought out!

She’s going to Italy for talks because all of the Arab countries in the region refused to admit her for this farce.

In Rome, Rice will face desperate Lebanese leaders, UN officials and Europeans demanding a ceasefire and Arab allies who reportedly refused to host her visit, dismayed at US strategy.

And one wonders when American secretaries of state started wearing athletic togs to formal events.

. Rahall votes against resolution backing Israel The situation in the Middle East has so alarmed Arab American communities that the Arab American Institute held an emergency Washington summit Wednesday. Issa told approximately 100 people it would be up to individual Lebanese Americans and to Congress to aid Lebanon once there is a cease-fire. “We know the day after we’re not just going to have to rebuild the bridges and power plants and the other areas that were hit. We’re going to have to build it a new way,” he said. Nick Rahall (D-WV) said he has been thinking a… Read more »

Geez Louise, Oui, do you know know anything!  She just got back from the tour deRussia/deGermany!  she needs to regroup, doncya know!!  After all a girl gotta do what a girl gotta do…she needs time to get her hair done and nails done and a pap smear done, let alone the colonoscopy… and a body massage with negroponte and crowd, and to shop for a new dress, whoops pant suit, and shoes for the trip.  She also had a pressing date to see to…wink wink…. and then she had meet up with a few friends for a dinner engagement, to… Read more »

. Just to compose this statement to the press  … shuttling is quite difficult while polishing your nails. From the NY Times article — Ms. Condoleezza Rice “I have no interest in diplomacy for the sake of returning Lebanon and Israel to the status quo ante. I could have gotten on a plane and rushed over and started shuttling around, and it wouldn’t have been clear what I was shuttling to do.” I do understand, Condi is expected to visit PM Prodi in Rome, so she will miss the exclusive shops of Milan. "But I will not let myself be… Read more »

oh I know Oui..I know, I just had to make a little fun out of her…she is such a wimp by all standards of what I as a woman would declare.  I think she shuttle a lot when she would be standard in worldly thinking…she shuttles to the hustle she does to us all…:o)  That was just parody, hope you know…just in fun….I was not serious..

I know this is serious, but if I did not take a little fun here in my day about such a serious matter I would go mad, most certainly…am just about there anyhow…:o)  hugs

A sad indictment of the blood lust obsessed leaders most of the so called civilised world seems to have. A sad indictment of the racist valuation of human life on different levels by our governments and maybe many people.
What western leader or government retains any right to label anyone a terrorist or describe any act as terrorism, war crime or crime against humanity?
If this is civilised democracy maybe we would be better off with something else.

. Condoleezza Rice Calls for ‘Sustainable’ Truce BEIRUT (BBC News) 5 minutes ago — US Secretary of State Condoleezza Rice has said there is an “urgent” need for a ceasefire in Lebanon – but that conditions have to be right. Ms Rice, speaking en route to Israel, said there must be no place for “terrorist groups” like Hezbollah to launch attacks from Lebanese territory. Rice arrives in battle-scarred Middle East BEIRUT (AP) — Rice also said there are existing channels for talking with Syrian leaders about resolving the crisis — when they’re ready to talk. Displaced Lebanese people walk past… Read more »

. Duty as a pilot in Israel’s War of Attrition with Egypt under Nasser – Egyptian school bombed: 48 children died. Under his command, execution of extra-judicial assassinations in Gaza and the West Bank occupied territories. Defended the bombing of an appartment building killing 16 civilians including nine children by F-16 precision strike, dropping a one ton bomb to take out a ‘terrorist’. Controversy lasted through appointment cycle as new chief of staff, ended before the Israel Supreme Court where he lied out of the dilemma. Pilots have no concern or responsibility for consequences of target where the bomb is… Read more »

in Beirut of the US plan for an eventual ceasefire. It includes such gems as Hezbollah will retreat to behind the Littani River. Israel will give Lebanon the Shebaa Farms. Hezbollah will then disarm.
Considering that Hezbollah has always stated it will disarm as soon as all of Lebanon is back under Lebanese control this could even work. However, why would the US want to give Hezbollah a total victory?