Know your limitations, Aim For The Trees

My favorite bookie, second favorite bartender, conspiracy theorist par excellence, and local Zen Master “Benny the Blade” and I were playing golf several years ago at a public golf course on the day that I achieved Satori.

Perhaps it was merely Kensho but the moment had such lasting clarity, has remained in the foreground of my consciousness for so long that I choose to think of it as the moment when I found enlightenment.

We were halfway through the back nine on a beautiful late spring day and I had played better rounds of golf. I had just hacked my way through fourteen maddening holes, and was frustrated and angry at myself for my inability to stay focused on simple things like keeping my head down. I had already consumed about 94 strokes and was experiencing the realities of a frustrating game that Mark Twain once called “a good walk ruined.” The only hole I was sure to enjoy on this day would be 19.

Riding in the cart between holes, Blade had been keeping up a steady stream of wit and wisdom peppered with secret government plots and conspiracies and tips and insights on upcoming sports events, two subjects in which he is incredibly well versed and which he is able to segue between with the practiced smoothness of a snake oil salesman.
Blade is one of the most Runyonesque characters I’ve run across, a voracious reader, a creature of the pool halls and race tracks, kind of an urban oddball, possessed of an incredible mix of formal knowledge and street smarts, with a great, if sometimes painfully corn ball, sense of humor. Short of stature but solid and athletic, with a voice like parking lot gravel, I sometimes think that he is some kind of a mystical gnome. He is never boring.

Anyway, we were on the 15th hole, I had duffed my drive and taken a mulligan, hit a driver about 120 yards into the left rough and then caught one on the sweet spot and drove it 130 yards into the rough on the right where it came to a stop 6 feet from a tree that was directly in line with the green.

Without the damn tree I had a good chance to double bogey the hole but as it lay I’d be lucky to get out in 9 or 10 as there was a trap to the left of the green and water to the right. The narrow avenue of approach to the green was almost completely hidden by a stupid tree and as we pulled up in the cart Blade was chuckling sagely over my plight and enjoying himself, I felt, overmuch.

I dismounted and got out a seven iron and a fresh beer which I thought would be the right tools for the nasty job ahead. I stood and sipped my beer  studying the bleak potentialities of the situation and said to Blade that I’d have to lay up short of the bunker on the left.

“Go for the green” he said as I looked at him in disbelief.

“I can only see about two inches of the green on either side of this tree.” I whined, “How in the hell do you expect me to go for the green?”

Now, thoroughly pissed, I put my beer down on the ground and walked to the ball, briefly looked the shot over thinking that the damn ball would hit the tree and come right back in my face but I aimed directly at the center of the tree and hauled off and smacked the damn ball and in the next moment I beheld the power and beauty of the universe,  experienced the vast expanse of time and life and my place in it as that stupid ball missed the tree by the smallest fraction of an inch to the right and hooked back to the left and landed on the green three feet from the hole.

“Nice shot,” said the Blade as I boarded the cart and we headed for the hole, “I knew you couldn’t hit that tree.” I looked at him and in that moment, in the bemused and slightly smirking look he wore I saw that my friend had taken on the look of something that resembled Yoda in Star Wars, and I  realized that what I had just learned, had just witnessed, would stay with me for all my days. 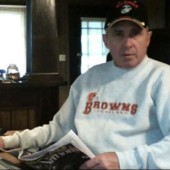