“Kim Jong-il issued an order of the chairman of the DPRK National Defense Commission on granting a special pardon to the two American journalists who had been sentenced to hard labor in accordance with Article 103 of the Socialist Constitution and releasing them,” KCNA said in a statement which carried a Pyongyang dateline. 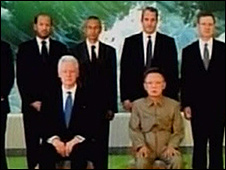 Clinton “courteously” conveyed a verbal message from President Barack Obama, the official Korean Central News Agency said in a report from Pyongyang. Kim expressed his thanks, and engaged Clinton in a “wide-ranging exchange of views on matters of common concern,” the report said.

White House spokesman Robert Gibbs, however, denied Clinton went with a message from Obama. “That’s not true,” he told reporters.

Clinton was in communist North Korea on a mission to secure the freedom of Americans Euna Lee and Laura Ling, reporters for former Vice President Al Gore’s Current TV media venture who were arrested along the Chinese-North Korean border in March and sentenced in June to 12 years of hard labor for illegal entry and engaging in “hostile acts.”

Quoting Klansmen on the House Floor