.
In Europe, the Vatican wouldn’t stand a chance with such demands of obedience to men in Rome …

Rebel US nuns in showdown with Rome over women’s role

(Guardian) – She is the American nun who after 15 years spent working with war refugees in El Salvador now leads the majority of the 57,000 Catholic sisters in the US. He is the American cardinal who marched in San Francisco protesting against gay marriage and was accused of turning a blind eye to paedophile priests before he took over the Vatican’s doctrinal office, the modern version of the Inquisition. 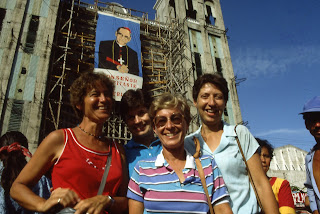 On Tuesday, Pat Farrell and William Levada will clash in Rome at the climax of a raging row over what Catholicism means for women. It will be a confrontation that pits America’s increasingly independent and broad-minded nuns against the Vatican’s male guardians of the faith. “Pat Farrell knows it will be daunting, but she sees the importance of this meeting for the whole Catholic community,” said her spokeswoman, Sister Annmarie Sanders.

The showdown follows the claim by Levada’s department that Farrell’s Leadership Conference of Women Religious, the umbrella organisation for most US orders, has been promoting “radical feminism” and glossing over the Vatican’s hard line on gay marriage and abortion.

The nuns have drawn strong public support in the United States since the Vatican moved to rein them in. In the past few weeks Catholics have organized vigils outside churches from Anchorage, Alaska, to Lady Lake, Florida, and in major cities including Boston, Chicago, Dallas and Los Angeles, as well as outside the offices of the U.S. Conference of Catholic Bishops in Washington, D.C.

Knots of demonstrators – sometimes a handful, sometimes several dozen – come to pray, sing and give thanks for nuns. More than 50,000 have signed an online petition asking the Vatican to withdraw its order.

The Leadership Conference cited that support in its tough response to the Vatican, saying the board “believes that the matters of faith and justice that capture the hearts of Catholic sisters are clearly shared by many people around the world.”

The interesting part of this story is that the “Vatican” in this case is really an American Cardinal who appears to be using his Vatican office to engage in political action in US politics.  Very prominent European pro-choice Catholics such as Sarkozy and Tony Blair get personal papal audiences and awards, so this is very much all part of the American political process.  It’s yet more evidence of continued US dominance of global affairs since even the Vatican is now a tool of internal American political interests.

. Spend some time in the beautiful city of Amsterdam yesterday to attend an event at De Rode Hoed near the Westertoren and Anne Frank’s House. ‘Women in Israel: to the Back of the Bus? Ultra-Orthodoxy, Liberal Protest & Women’s Rights’ The event will take place on Thursday, 14 June 2012, from 20.00 hrs. (doors open at 19.30 hrs.) to 21.30 hrs. at De Rode Hoed, Keizersgracht 102 in Amsterdam. Admission is free and afterwards drinks will be served. The lecture will be given by Prof. Tamar El-Or and Orly Erez-Likhovski. Prof. Tamar El-Or is an anthropologist at Hebrew University… Read more »