Strategic city of Qusayr falls into hands of Assad forces

DAMASCUS – Syrian troops backed by Lebanon’s Hezbollah on Sunday entered Qusayr, a strategic rebel stronghold linking Damascus to the coast, a day after President Bashar al-Assad insisted he would not quit. The advance came as Assad’s opponents warned his regime’s “barbaric and destructive” assault on Qusayr could torpedo US-Russian attempts to organise a conference on ending two years of bloodshed in the country.

The Arab League called an emergency meeting for Thursday, ahead of the conference, as the opposition Syrian National Council (SNC) demanded it meet and “stop the massacre in Qusayr”. 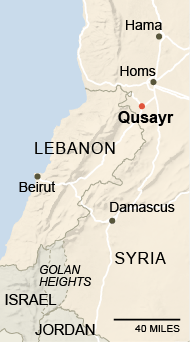 Forces loyal to Assad launched Sunday’s offensive by heavily bombarding Qusayr with artillery and warplanes early in the morning. Hours later, a military source said that government forces entered the centre of the town, with troops raising the Syrian flag over the recaptured municipality building.

“The Syrian army controls Qusayr’s main square in the centre of the city, and the surrounding buildings, including the municipality building,” said the source.

(CNN) – There was no immediate response from the rebel Free Syrian Army. But some members of the Syrian opposition acknowledged the loss of Qusayr to government forces.

“Yes, dear brethren, this is a battle that we lost but the war is not over yet,” said the Homs Revolution News, which is associated with the Local Coordination Committees of Syria — an opposition activist network.

The rebels’ loss of Qusayr is a significant blow to those trying to oust Syrian President Bashar al-Assad. Qusayr, located near the Syrian border with Lebanon, had been a rebel stronghold through much of Syria’s civil war.

“If Qusair falls at the hands of the regime, there is no way to stop the acts of reprisal, and that retribution will (reach) another level,” rebel spokesman Col. Abdul Hamid Zakaria told Al-Arabiya last month. “This will lead to Shiite and Alawite towns to be completely wiped out of the map by some.”

(The National) – The Syrian political opposition, in its current form, is a hopeless case. Members of the opposition have been holding intensive talks to expand the National Coalition for nearly a week, with little progress.

The meetings in Istanbul are meant to discuss the inclusion of more members, mostly moderates, in the coalition to make it a more representative and balanced political body. As it stands now, the political body is controlled by one group that has a tenacious monopoly over the decision-making process.

The coalition’s general assembly announced that eight new members have been added, after they won 42 votes from existing members. But the coalition has deep structural issues that render the inclusion of new members almost meaningless.

Existing members of the coalition insist that the inclusion of new members must be based on balloting by existing members only. But this would change little in a monopoly that was made possible by interference from regional countries to begin with, rather than based on consensus among Syrian opposition. The existing members were not chosen by the people to decide whether certain opposition figures should be members or not.

The second issue is the “blocking third”, or the veto power held by a third of the members. This idea was advanced by the coalition’s secretary general, Mustafa Al Sabbagh, and was clearly meant to maintain the monopoly of the current core group within the coalition.

Mr Al Sabbagh was directly appointed by Qatar and its allies in the Muslim Brotherhood when the coalition was formed in Doha in November. Shortly after his appointment, he unsuccessfully tried to bypass the coalition’s leadership through ad hoc power grabs.

Saudi Arabia takes over from Qatar to solve Syria’s crisis

(Blog HassanHassan) – There seem to be some important developments with regard to the Syrian opposition and regional patronage over the past few days. Saudi Arabia appears to have taken over from Qatar in dealing with the Syrian opposition, as great powers begin to agree on general principles for a solution in Syria.

The opposition met with Saudi authorities for two days and discussed ways to improve communications between them. Riyadh, contrary to popular belief, has not been working closely with the Syrian opposition, especially the political bodies, as the kingdom believed they were dominated by the Muslim Brotherhood.

The members also agreed to expand the coalition’s representativeness to include minorities, particularly the Kurdish forces. Riyadh, meanwhile, promised to step up political and material support for the opposition.

Weren’t Assad’s days numbered a year ago?  Who could have predicted that the US government foreign policy team and the MSM could get it wrong?

Meet the ‘Friends of Jihad’ Western politicos love to shed swamps of crocodile tears about “the Syrian people” and congratulate themselves within the “Friends of Syria” framework for defending them from “tyranny”. Well, the “Syrian people” have spoken. Roughly 70% support the government of Bashar al-Assad. Another 20% are neutral. And only 10% are aligned with the Western-supported “rebels”, including those of the kidnapping, lung-eating, beheading jihadi kind. The data was provided mostly by independent relief organizations working in Syria. The North Atlantic Treaty Organization (NATO) received a detailed report in late May – but, predictably, was not too keen… Read more »

Which tour do you mean?

Good point.  Have there been any that weren’t busts?

Here’s a report on that poll: NATO data: Assad winning the war for Syrians’ hearts and minds “The people are sick of the war and hate the jihadists more than Assad,” a Western source familiar with the data said. “Assad is winning the war mostly because the people are cooperating with him against the rebels.” […] The sources said no formal polling was taken in Syria, racked by two years of civil war in which 90,000 people were reported killed. They said the data came from a range of activists and independent organizations that were working in Syria, particularly in… Read more »

Yes, the blood is on Obama’s hands because he resisted the Joint Chiefs of Staff, his CIA director, and his Secretary of State and refrained from flooding the country with our weapons.

Teenager, 14, Executed By Islamist Rebels in Syria A teenager selling coffee in the northern Syrian city of Aleppo was arrested by Islamist rebel fighters for insulting the Prophet Mohammed, beaten and then executed in front of his family, a watchdog group claims. The boy, Mohammed Qatta, 14, reportedly refused to give a customer coffee, the Syrian Observatory for Human Rights reported Sunday. “Even if [Prophet] Mohammed comes back to life, I won’t,” the boy said, who was known by his nickname “Salmo.” Extremist rebels driving past in a black car overheard the comment, the opposition Aleppo Media Center said.… Read more »