Welcome to our live-wire coverage of the 2016 race for the White House. Bernie Sanders has responded in the enthusiastic affirmative to an offer of unclear seriousness from Donald Trump to debate him before the 7 June California primary. 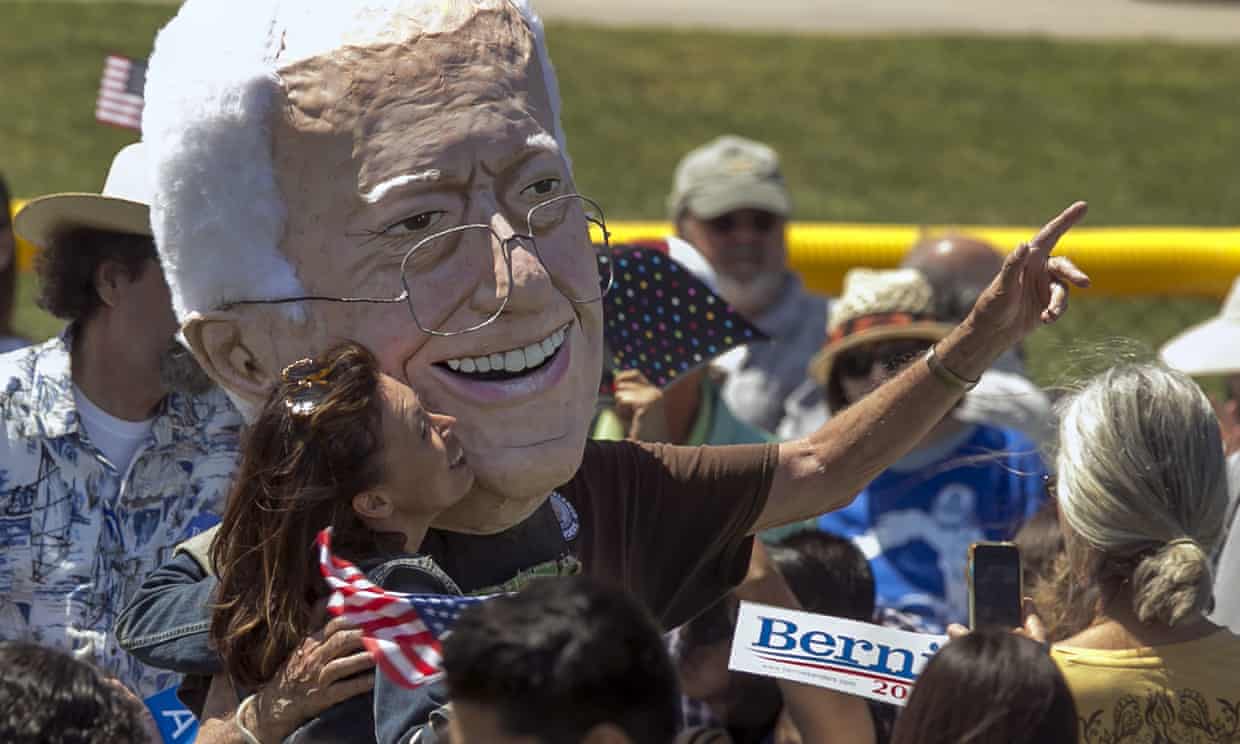 Appearing on late night funnyman Jimmy Kimmel’s show on Wednesday, Trump said he would be glad to debate Sanders mano a mano – for charity. At which Sanders, whose supporters routinely cheer his stump speech attacks on Trump, and who has failed to lure Hillary Clinton into a similar California showdown, tweeted that he was game:

” Game on. I look forward to debating Donald
Trump in California before the June 7 primary.”
Source: Bernie Sanders campaign tweet

“He’s already started moderating on that. He
operates by starting the conversation at the outer
edges and then brings it back towards the middle.
Within his comfort zone, he’ll soften it some more.”

He’ll still end up outside of the norm, but in line with what the American people are thinking.

Barack Obama, speaking at the G7 summit, said that the world was “surprised” by the prospect of Donald Trump as the Republican nominee for president.

Mike Lee and the Need for Filibuster Reform

Lately (since ratcheting up fear of the Russian bear) the Dutch news services are pretty pro-America and follow the right-wing media stories like from the WSJ. I’ve written about U.S. propaganda outlets, NATO agression in Europe and the Atlantic Council.  The Hillary Clinton story about her emails is widely covered in European media as it is in The Netherlands … doing Donald Trump and the GOP a great service. Clinton’s inexcusable, willful disregard for the rules | The Washington Post | HILLARY CLINTON’S use of a private email server while secretary of state from 2009 to 2013 has been justifiably… Read more »

This debate between Sen. Sanders & Trump will generate high ratings and a lot of $$ for charity. I wonder what network will host it? HRC should have honored the debate with Sanders in California; otherwise, we might not be seeing this headline.

HRC should have honored the debate with Sanders in California

She cannot. Every time she opens her mouth she loses more votes. This was OK when she was the media-promoted “winner,” but now? Razor thin dfferences.

Opinion: Russian Roulette at the White House as Obama visits Hiroshima | Deutsche Welle | Barack Obama is set to visit Hiroshima, the first city to suffer atomic bombing. There was a time when the US President’s nuclear policies were praised – but prematurely so, says DW correspondent Miodrag Soric. From a political point of view, 2009 is eons ago. Back then, a young president promised hope, change and a new way of thinking: forget the old patterns that reigned during the Cold War! Barack Obama demanded brisk steps toward a nuclear-free world. He announced a massive reduction of nuclear… Read more »

mini-nukes aka tactical nukes are more dangerous than city busters because they are more likely to be used.

clif
Reply to  The Voice In The Wilderness

The Voice In The Wilderness
Reply to  clif

Davy Crockett, there’s a suicide weapon. Fired from a Jeep, its radius of destruction was larger than its range.

TarheelDem
Reply to  The Voice In The Wilderness

Tactical nukes are not likely to be used where one’s own troops are.  They have little value as a result because they irradiate areas that one is pretending to protect. Nuclear weapons are fundamentally either useless or genocidal in actual use.  That is why so many nations signed the nuclear non-proliferation treaty and why those nations that do have them are in the midst of self-created chronic conflict.  That includes the largest nuclear weapons holder, the United States. Advocating for nuclear weapons that can actually be used on a commander’s whim should be a disqualifying position of a politician, as… Read more »

>>Over the next 30 years, the US plans to invest the astronomically high sum of more than $1 trillion (891 billion euros) in the construction of new aircraft carrier systems, long-range aircraft, a dozen nuclear-powered submarines

I won’t endorse the part that comes after this, but if we don’t build new ships and aircraft over the next 30 years we won’t have an operational navy or air force.

What is the role of aircraft carriers in future wars?  What keeps them from being properly maintained?  Why can they not last for 400 years if they are that expensive? We have kept B-52s in the air for over 60 years because they were designed to be functional in the strategic air space, they are inexpensive to operate, and even with aluminum construction, they can be easily repaired. The demand for new expensive toys is a huge drain on the US economy and the world economy.  We fail to build infrastructure at home and destroy it abroad. $1 Trillion is… Read more »

Ship’s hulls have a finite life because of repeated stress of operation. Why do they cost so much? Having worked in the business I can say that the primary reason is cost-plus contracting. McNamara did try fixed bid, but fixed bids are inappropriate for new designs that push the performance envelope. The contractors had to be bailed out from the cost overruns. The ONLY way to control these costs is to return to the Navy owned construction shipyard, which is how Naval vessels were built prior to WW II. In WWII, private industry was engaged because of the massive expansion… Read more »

TarheelDem
Reply to  The Voice In The Wilderness

There are lots of good reasons for bringing all of the contracted functions back in house, from the Postal Service to armories and shipyards.  At least then it would be accounted as a government cost that all true conservatives would have to reduce instead of private sector jawbs.

AB members challenge US over reappointment of Seung Wha Chang Geneva, 19 May (D. Ravi Kanth) – The six remaining members of the World Trade Organization (WTO)’s adjudicating body, the Appellate Body (AB), on Wednesday (18 May) spoke their mind against the unilateral decision of the United States to block the reappointment of Mr Seung Wha Chang on unjustifiable grounds.  The US decision has generated chilling “risks” for the “trust” placed in the independence and impartiality of Appellate Body Members on which the dispute settlement system depends, the members said in a letter to the Chairman of the Dispute Settlement… Read more »

Wow, Trump just canceled the debate with Sanders, who was hyperventilating at the chance to engage in a debate that no one except Bernie wanted. Seems no one wants to engage with Mr. wag the finger.

The only debates in the future will be Trump and Clinton, and Hillary will clean his clock.

The Voice In The Wilderness
Reply to  eastcoastmoderate

She’s going to be his maid?

Arthur Gilroy
Reply to  The Voice In The Wilderness

You may have spoken too soon. It looks like Trump has reconsidered debating Bernie Sanders.

Sanders fuels prospect of debate with Trump Trump made it clear Thursday that he wants to follow through with the debate. “I’d love to debate Bernie. He’s a dream,” the real estate magnate said in Bismarck, North Dakota. “If we can raise for maybe women’s health issues or something. If we can raise $10 or $15 million for charity, which would be a very appropriate amount.” The Republican nominee said his team has been in conversations with several networks about hosting the debate. “It should be in a big arena somewhere. And we can have a lot of fun with… Read more »

Now Trump says debating Bernie was a joke. Looks like the joke is on Bernie.

The Voice In The Wilderness
Reply to  eastcoastmoderate

Don’t forget to spew this piece of vomit.

In fact why don’t you go post over there with the rest of the Hilbots?

And that guns from VT are killing New Yorkers at a higher rate than something, something.

eastcoastmoderate
Reply to  The Voice In The Wilderness

Why?? I like it here. Gives me a chance to tell the other side of the story and balance out the Bernie nonsense.

Each and every one of your comments is the confirmation why HRC is the lesser candidate for becoming president of the United States. Bernie’s movement will roll on, whatever happens in Philadelphia …

Trump proves that his word isn’t his bond.  But his fans love that about him.

Same can be said for Hillary and her fans.

Yeah but Hillary has about 3 million more fans than Bernie

Really?? When have I ever said I was cheering for Trump?? The guy is comparable to George Wallace.

Debbie Netanyahu Schultz | Mondoweiss – 2012 | Here is the FEC data on the Falic family showing the contributions to Wasserman Schultz. They maxed out for her, at $2300 each. These donations help explain why Wasserman Schultz said, astonishingly, during the recent Democratic Convention that there must be no daylight between the Republican and Democratic Parties on support for Israel- “We need to make sure that the fact that there has never been and will never be daylight between the two parties, or the support for Israel that we have in the United States- that that is conveyed to… Read more »

Senator Bernie Sanders of Vermont, frustrated by how he has been treated by Democratic Party officials in his primary campaign against Hillary Clinton, bolstered that effort over the weekend when he endorsed Tim Canova, a law professor at Nova Southeastern University. Mr. Canova is hoping to unseat Representative Debbie Wasserman Schultz of Florida, the chairwoman of the Democratic National Committee, in a primary contest in August.

Rupert Murdoch smells a winner … he used to back the Senator Clinton campaign in New York. It takes a crook to know one.  😉 Why Rupert Murdoch Decided to Back Donald Trump According to a half dozen sources familiar with Murdoch’s thinking, the media mogul has signaled he plans to fully back Trump in the general election against Hillary Clinton. Murdoch’s embrace of Trump is a sharp reversal from the hostile view he held over much of the past year. In fact, according to one high-level Fox source, it was Murdoch himself who directed Kelly to hammer Trump during… Read more »

I suspect that he only supported Hillary Clinton in the primary.

In this primary, Bernie’s economic policies scare the heck out of people like Murdock.

Scare the heck out of virtually the entire structure of elites in government and business and that 50%+/-10% of the population that bows to TPTB.

When Bernie Wasn’t Even Mentioned … ○ Hillary Likely to Romp by BooMan on Apr 5th, 2013 ○ Sanders and [Bill] Clinton by BooMan on Dec 11th, 2010 SANDERS SPEAKS….  | Washington Monthly | After Sen. Bernie Sanders (I-Vt.) held the Senate floor yesterday for eight-and-a-half hours, it’s tempting to embed the whole thing. But given YouTube’s time limits on clips, it would take roughly 34 separate videos to capture the floor appearance from start to finish. I can, however, include this 12-minute clip, posted by Sanders’ office and flagged by Joan McCarter, which helps give viewers a taste. I’ll… Read more »

who just don’t get it at all what the underlying current is all about!