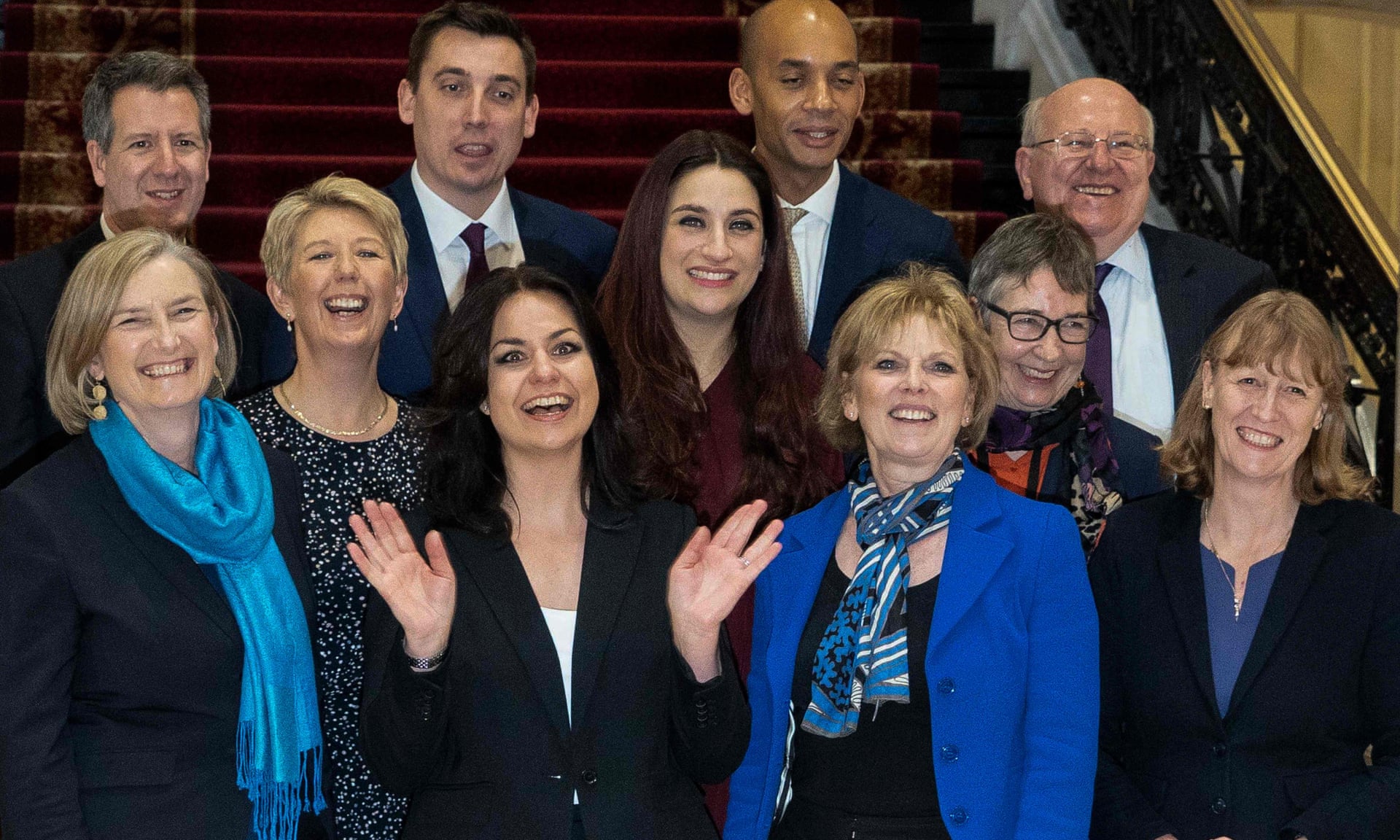 So 7 Labour MPs chose to resign the party whip and set up an independent group citing dissatisfaction with Corbyn’s leadership and claiming endemic anti-Semitism within the party. Hardly the most pressing issue exercising the minds of the populace just now. Perhaps it was the only issue they could find to unite around.

Then they were joined by an eighth Labour MP and three Tories. Hardly a rush to the centre.

But enough to worry Corbyn and May, and soon, perhaps, enough to ensure that the DUP and ERG aren’t the only game in town. The problem is that it is not clear they have a unified and coherent plan for dealing with Brexit. Do they all support a second referendum? Will some support May’s deal if the alternative is no deal? Will their whole raison d’etre be undermined if Corbyn ends up supporting a delay and then a second referendum?

So far they aren’t a game changer, but if their numbers grew to perhaps 20 – roughly equally from both Labour and Tory camps – they could come to represent a new balance of power with which either May or Corbyn would have to treat with if they wanted to have any hope of achieving a parliamentary majority.

But how coherent a group are they? What are their policies and objectives? Say what you like about the DUP, but all their 10 MPs march in lock step. It seems appropriate that they have formed themselves, initially at least, as a limited company rather than a party. They seem more of a business lobby than a traditional political party, and much of their funding probably comes from businesses terrified at the prospect of a no deal Brexit. But in the age of Russian election interference and Zionist influence peddling, the funding opaqueness represented by private equity ownership doesn’t present a good look.

So they probably have a few weeks to consolidate their numbers, form a party, formulate some policies and elect a few spokes people if not an outright leader. Otherwise they may well slide into incoherence and irrelevance.

One issue parties rarely do well in the longer term, but if their issue is a second referendum to give voice to the 48% who voted Remain and the majority who would probably support Remain in preference to May’s deal or no deal now, then they have a shelf life at least until that referendum is held. After that they would probably have to join up with the Liberal Democrats to survive.

There has been some commentary that they don’t include any national figures comparable to the “gang of four” (Roy Jenkins, David Owen, Shirley Williams and Bill Rodgers) who formed the breakaway Social Democrats who later combined with the Liberals to form the Liberal Democrats. This may effect their prospects in the longer term, but right now its a number’s game.  If they can attract a few more MPs they could supplant the DUP as the swing vote in the House of Commons.

So far Theresa May seems barely to have noticed – determined to plow her own furrow of seeking legal guarantees around the Irish backstop. But it seems unlikely that any deal she can negotiate with the EU will mollify the DUP, in which case the Independent Group votes could come into play.

Equally likely however, is that they will join the flotsam and jetsam of history, the litany of breakaway groups that ended up going nowhere, destroyed by their own incoherence and the first past the post single seat constituency parliamentary electoral system which permits of only two major national parties. The centre may not hold, and even if it does, it may simply move elsewhere.

The question is whether Theresa May is following her present course out of conviction or merely to mollify her hard liners. It seems to me it is both: she seems genuinely committed to delivering her version of Brexit and opposed to a second referendum on principle. In which case she may prefer a no deal Brexit and running down the clock to dealing with the Independent group in order to achieve a parliamentary majority for a softer Brexit.

If May succeeds, the Independent Group could end up being the shortest living political movement in recent history. Alternatively they could be the vital missing piece in putting together a coalition with the numbers to pursue an alternative course of action. But Corbyn is yet another missing piece in this jig-saw. Just precisely what will he do if a no deal Brexit beckons?

One way or the other, it may well be that only the people can decide. Are there sufficient further MPs prepared to force an election or a second referendum by supporting a vote of no confidence in the Government?

Iraq War a Force for Good

You’ll have to ask the original gang of 7 what they mean by “endemic anti-Semitism” as it is they who chose to make it their signature issue. As Corbyn is a lifelong supporter of Palestinian issues  – and Palestinians are also a Semitic people – I suspect they are confusing anti-Semitism with anti-Zionism.

I’ll conclude from the first part of your response that you haven’t noticed what you actually wrote (“anti-antisemitism”).

Absolutely nobody uses the term “antisemitism” to refer to Arabs, so your note about Palestinians being a Semitic people is a distraction.

And I’m still waiting for your definition of “Zionist influence peddling”.

Likud and Netanyahu hand-in-hand with rightwing extremists across the globe, setting their agenda for “survival” … creating instead their downfall.

Anna Soubry counts as a national figure, I think. Otherwise, yes, not a lot of firepower here. This whole thing is being run on standard EU timing – nothing gets done until right before the deadline. That would predict the deadline may get slipped, because that’s another standard of EU timing. May’s plan all along has been to get a deal where the catastrophe is spread out and survivable and can be overlooked with some help from the Tory media, and then get it through as a “compromise” deal that Remainers will tolerate as “not the worst possible Brexit” and… Read more »

I read what The Guardian had to say about the Labour MPs who defected, and was forcefully reminded of what I remember from the year I lived in England: there’s no attempt to separate news and opinion in British newspapers (with the possible exception of The Independent). The Guardian savaged the Labour defectors. There was one piece written by the head of the Labour Party that characterized the defectors as right-wing hacks, for example. The thing is, some of us remember that Jeremy Corbyn was not chosen as the leader of Labour in the House of Commons by his peers… Read more »

I am fortunate that in Ireland there is no perceptible anti-Jewish sentiment although that may be, in part, because they are a relatively small part of the population. So far, touch wood, anti-foreigner, anti-immigrant, anti-other feeling is noticeably absent despite 14% of the population having been born outside Ireland (a higher proportion than the UK and most of Europe) and Ireland becoming much more diverse and cosmopolitan as a result. I can’t really comment on anti-Jewish sentiment in the rest of Europe as I have no direct experience of it. I do know there are quite xenophobic attitudes towards refugees… Read more »

For people’s democracy called for in a referendum … Brexit ‘must not, will not’ be blocked   Theresa May has vowed to Tory grassroots activists that she will not allow the referendum vote for Britain to leave the EU to be frustrated. The Prime Minister is flying to Egypt for an EU-League of Arab States summit where she is expected to hold talks with key EU figures as she battles to break the deadlock in the Brexit talks. […] Ahead of her departure, No 10 released details of her speech to a closed meeting of the National Conservative Convention (NCC)… Read more »

I don’t get this “taking no deal off the table reduces our negotiating leverage” crap. From an EU point of view a no deal Brexit is looking increasingly preferable to dealing with May/ERG/DUP.

And the UK better believe No deal Means No Deal. The EU won’t be rushing to cuts deals after a no deal Brexit either, except where they are very clearly in the EU’s own self interest. MEGA – Make Europe Great again!

Some things that have changed: The Gang of 11, if I recall is now 12. Depending on news source, could be at least a good number of Labour MPs tempted to split. Not sure about Tories. Corbyn is now throwing his weight behind a second referendum. I don’t know UK parliamentary politics well enough to know how much this changes the calculus of a second referendum actually materializing. I follow the YouGov tracking poll and the impression I get is pretty much like yours: Remain is ahead of Leave by near double digits, and both Labour and the Tories are… Read more »

I’ll have to figure out how to get behind the paywall.

I’ll check. May not be the case outside the EU. Could be wrong.

I also got hit with the paywall.

I will try to produce a suitable synopsis in due course – need time to write a new diary!