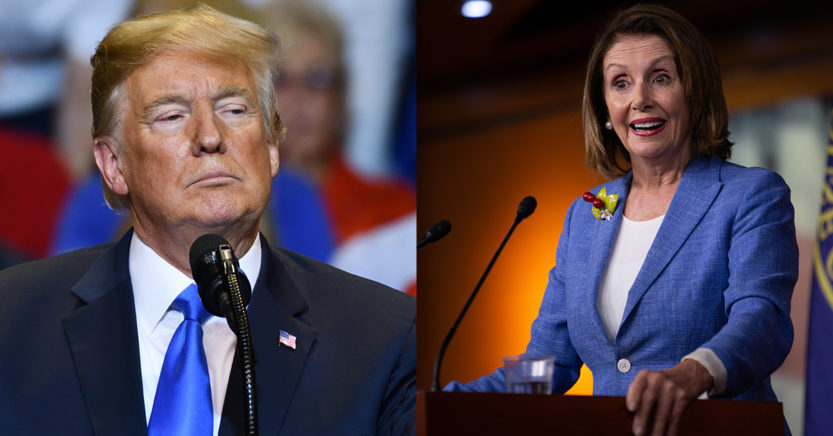 I don’t think President Trump gets the best legal advice. On Thursday morning, he sent out a couple of tweets that indicate that he doesn’t understand either the Constitution or what Nancy Pelosi is attempting to do by passing two articles of impeachment and then refusing to send them immediately to the Senate.

Let’s start at the beginning. The Constitution is pretty sparse in what it has to say about the procedure for a presidential impeachment. Article I establishes the legislative branch of government and gives the House of Representatives “the sole Power of Impeachment.” It gives the Senate “the sole Power to try all Impeachments.”

For further guidance we need to look at Clauses 6 and 7.

The first part should be familiar to almost everyone. The senators take an oath (later defined by Senate rule to read: “I solemnly swear [or affirm] that in all things appertaining to the trial of ____, now pending, I will do impartial justice according to the Constitution and laws, so help me God.”)

The Chief Justice of the Supreme Court is to preside over presidential impeachments, while this is not necessary for the trials of lesser officers. And, while impeachment only requires a majority in the House, actual conviction requires a two-thirds majority of the senators who actually show up to serve as jurors.

When sitting for that Purpose, [senators] shall be on Oath or Affirmation. When the President of the United States is tried, the Chief Justice shall preside: And no Person shall be convicted without the Concurrence of two thirds of the Members present.

The next part is a little less well known.

Judgment in Cases of Impeachment shall not extend further than to removal from Office, and disqualification to hold and enjoy any Office of honor, Trust or Profit under the United States: but the Party convicted shall nevertheless be liable and subject to Indictment, Trial, Judgment and Punishment, according to Law.

This is all the guidance we have in the Constitution on how impeachments are to be conducted. Another semi-authoritative source is Thomas Jefferson’s Manual of Parliamentary Practice for the Use of the Senate of the United States. Beyond this, all we have to go on is existing House and Senate rules and the limited precedents.

The precedents say that the House will either elect prosecutors (called “managers”) to try the case in the Senate or  allow the Speaker to assign them and approve her decision through a resolution. Typically, the same resolution would serve as a notification of impeachment to the Senate.

This notification is what triggers the Senate to act. They’re constitutionally obligated to try a case referred to them by the House. Precedent says that the Senate will acknowledge receipt of the House’s referral and state when they will be prepared to receive the House managers. The actual language governing this is in a document called the The Rules of Procedure and Practice in the Senate When Sitting on Impeachment Trials.

A normal reading of this clause would allow for no delay on the Senate’s part in receiving the House managers. But it also shows that the Senate can’t initiate a trial until the House appoints their managers and sends notice to that effect.

What Nancy Pelosi is doing is refusing to name the managers or to send the notice until she gets some clarity on how the Senate intends to conduct the trial. Trump thinks this is impermissible, but he’s wrong.

I got Impeached last night without one Republican vote being cast with the Do Nothing Dems on their continuation of the greatest Witch Hunt in American history. Now the Do Nothing Party want to Do Nothing with the Articles & not deliver them to the Senate, but it’s Senate’s call!

As I have adequately demonstrated, it’s not the Senate’s call on when to start the trial.

“The Senate shall set the time and place of the trial.” If the Do Nothing Democrats decide, in their great wisdom, not to show up, they would lose by Default!

As for the Senate’s discretion in when to set the time and place of the trial, that first of all assumes that the House has initiated the process. Trump’s precise wording here seems to be culled from the following part of the Senate rules of procedure:

So, to a degree, Trump is making a logical inference here. The Chief Justice needs to be informed of when and where the trial will occur so he can be there to preside. The Senate will determine this before sending an invitation to John Roberts. No other entity is responsible for setting the calendar.

But, as already mentioned, the Senate’s own rules limit their discretion. Upon receipt of notification that House managers have been appointed, they are to “immediately inform the House of Representatives that the Senate is ready to receive the managers for the purpose of exhibiting [the] articles of impeachment.”

The Senate rules also dictate the schedule of the trial once it has commenced.

III. Upon such articles being presented to the Senate, the Senate shall, at 1 o’clock afternoon of the day (Sunday excepted) following such presentation, or sooner if ordered by the Senate, proceed to the consideration of such articles and shall continue in session from day to day (Sundays excepted) after the trial shall commence (unless otherwise ordered by the Senate) until final judgment shall be rendered, and so much longer as may, in its judgment, be needful.

So, it is true that the Senate sets the calendar and place of the trial, but they don’t have much latitude about this unless they’re willing to change their rules. The most important thing is that the can’t do anything until Pelosi appoints the managers and sends the notice. So, in this sense, she makes the call and she sets the time. The Senate obviously can set the place, but it’s doubtful they’ll hold the trial at the National Zoo.

Pelosi has the impeachment articles in hand now, and she can compel the Senate to drop what they’re doing and hold a trial anytime she feels like it. This is the leverage she’s using to try to compel the Senate to agree to terms that are fair to the prosecution. The Republicans would like to move quickly before the Courts compel the testimony of more witnesses and before any other damaging information comes to light. Pelosi does not share these incentives. Her caucus is in holiday recess for the next few weeks in any case, so she doesn’t have any urgent need to do anything but enjoy Christmas with her grandchildren.

She will not “lose by default” unless she never sends the referral. For now, she’s happy to let Trump and McConnell twist in the wind, knowing that time is her ally.

I Don’t Trust This SCOTUS

I have a feeling that the longer she holds off and the longer Trump and McConnell twist in the wind, the more likely Trump is elected in 2020.

The US Public has proven over and over that they’re impatient, and often times, fucking morons.

Good thing it’s not just based on feelings. This doesn’t seem to be what polls are indicating so far.

The ones showing Clinton as the obvious 2016 winner?

Well, what else do we have? Feelings?

This is uncharted territory so watch the polls that could change radically.

No, the one’s showing 71% support for Trump to allow having witnesses at the trial.

Defense can call witnesses in a criminal trial. It’s not a sign of anything

What polls do you have in mind?

Because the poll aggregators (e.g., RCP, 538) showed Clinton with a 3% popular vote margin on the eve of the 2016 election, and the actual vote resulted in Clinton with a 2% margin.

Note: I’m not arguing that polls in general—much less any individual poll—are anywhere close to infallible. But they provide information that our individual feelings can’t.

It was the pollsters that were wrong not the polls. Well except Nate Silver. But then Ezra Klein ripped hom for being irresponsible about showing Trump with 1/3rd chance to win.

There are some cracks in the facade of 45’s base. Christianity Today called for 45 to be removed from office. That’s an evangelical outlet that has something of a following. It may not be much at the moment, but suggests some sort of tipping point in the offing. What I know of white evangelicals is they seem like a very tribal lot. If pastors start advocating for a particular political action, you can bet their flock will follow. If pastors start demanding 45 leave the White House, their flock will be angrily calling their GOP congresscritters. It’s a pretty safe… Read more »

What percentage of Evangelicals read?

Maybe someone who is better at accessing those data could answer that first question, assuming it was a serious question and not a rhetorical one. CT is still considered the flagship evangelical journal, although I doubt the Graham family have any involvement w/it at this point (Billy Graham’s son is a Trumpster as is well known). Like a lot of legacy media I doubt its print circulation is what it was in its heyday. Not sure how it usually does in terms of web traffic, although I imagine that column will provide at least a temporary boost in terms of… Read more »

Pelosi so far has played this well. I would hesitate to doubt her judgment. At least on the merits, having assurances that the Senate will actually do due diligence strikes me as imperative before kicking the process over to the Senate. Let 45 angry tweet for a few weeks during the upcoming break. Let Turtle twist in the wind a bit. Let them stress out and enjoy a few weeks of peace. The trial couldn’t start til sometime in January at the earliest anyway. In the meantime, my Senators will be home. Might be a good time for me to… Read more »

“I don’t think President Trump gets the best legal advice.” LOL!
Seems to me the last legal advice he listened to was from Roy Cohn. After that, lawyers were commanded–not heeded.

(P. S. Thanks for the detailed and documented analysis/explanation, too.)

Some polling numbers. Looks like a substantial portion of the population wants witnesses at Senate trial – precisely what 45 and Turtle wanted to avoid:

More via our poll with @POLITICO: https://t.co/EZMDqnxQMH

I wonder what the percentage would be if they asked: “Do you want a fair process?”