College Republicans know who the real enemy is

As Booman pointed out today:

In other words, his enemies are those who speak truths he doesn’t want heard or who declare their doubts about his policies. And as they’ve been showing by staying away from recruiting offices in droves, the conservative youth of America are apparently down with this.

However, in the descriptions of the recent College Republican love-in, I’ve been bothered by something beyond the obvious chickenhawkery, the low-rent machismo and dilettante debutantage, and the dewy-eyed smugness of most of the participants. These are mostly teenagers. Who told them that this was how you act during a war? What model are they looking to?

Markos often notes how the various phalanxes of right-wing noisemakers not only refuse to enlist themselves, but refuse to tell their eager minions to enlist. From what these conservakids are saying though, I think it may go a step beyond that.

They are being told that the fight against liberals here at home is just as important – if not moreso – than the actual frontline fighting in Iraq. Dear Leader’s war will not succeed or fail based on how well the armies of the U.S. and its allies do in Iraq at rooting out insurgents and terrorists, but rather on how well the Army of the GOP succeeds in fending off attacks on Dear Leader’s image. As Campus Progress’ “Conventioneer” noted:

Tony Perkins from the Family Research Council took the stage, noting with courageous enthusiasm, “There are some things that are worth fighting for.” He proceeded to talk about the Iraq War, and some very heroic veterans. … Then he said, “They’re giving their lives as you’re giving your time.”

You can be a true American hero by staying home and fighting the people who say the war is not worth fighting. The time you spend finding ways to silence dissent here at home is just as worthy a sacrifice as the life of the soldier who falls on the frontlines.

“I think I could do more here,” Hokel said, adding that she’s focusing on political action that supports the war and the troops.

“We don’t have to be there physically to fight it,” she said.

Similarly, 20-year-old Jeff Shafer, a University of Pennsylvania student, said vital work needs to be done in the United States. There are Republican policies to maintain and protect and an economy to sustain, Shafer said.

While there have always been rich kids (like Bush) who duck out when military service is called for, I can’t think of any other war where teenagers would be staying stuff like this. In the past, in time of war, young people would sign up to serve and go where the military told them. If the service really thinks you’ll be more useful carrying a pen than a rifle, they’ll make you a journalist.

There’s something going on here beyond cowardice or hypocrisy on the part of young right-wingers. The easy answer would be to declare it, well, not a conspiracy exactly, since it’s pretty much out in the open, but a considered tactic of the GOP establishment and their surrogates to enlist young conservatives in an ideological army parallel to the usual military. However, there could be other contributing factors.

Could this be the current version of the anti-war movement from Vietnam? The Republicans have in some sense given themselves the aura of a counter-culture with their constant complaints that a dominant liberal culture (which, ironically, is also somehow a minority) is discriminating against conservatives, Christians, entrepreneurs, or whoever feels like whining in a particular week. And there is also a sense in which, despite recent jingoism, the tragic view of war has acquired more resonance in American culture than visions of military glory. Perhaps protesting in the name of aggression feels like rebellion.

Could this be the Republican cult of individualism turning round to bite them? After all, America is about freedom. So we ought to be free to choose how to serve our country in time of war, no? Thus they congratulate themselves on their individualism while the military hollows like a dried gourd. The rock on which their patriotism is built sacrificed to a culture of “do what feels right”.

The oddest idea I’ve had about this is that it might be a result of shifting gender roles. Historically, men “go for a soldier” while women “keep the home fires burning”. So now that these roles have lost their former rigidity, both young men and young women feel they have choice as to which role to take. And since the choice is now perhaps seen as being between two honorable roles rather than between service and cowardice, youth are deciding to go with the choice that doesn’t involve their ass getting blown off, cf. market forces, rational self-interest.

Young Republicans seem to have decided that the real enemy is liberals, not terrorists. The question is, why? 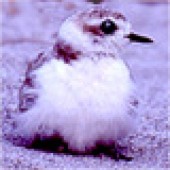 A Little Bit of Inference