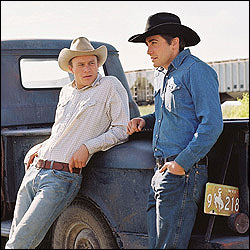 So you ask, “why is Brokeback Mountain being reviewed on a liberal website”? The answer is because gay film is political by it’s very nature these days with the fundies and the Repblicans trying to vilify us on a daily basis. This is a film every one of them should see but we’ll probably have to settle for their young adult and teenage kids this weekend. If we’re lucky they’ll Netflix it so no one will see it being delivered.

I saw the film on opening day here in NYC with a sold-out audience (the entire day was sold out at the theater I was at and it was showing on 3 screens). The audience seemed to be more than half straight and many ethnicities were in attendance which was wonderful to see. The audience applauded during the end credits so it’s safe to assume it was well received by the majority.

The acting was completely on target on all counts and these two men will only benefit from appearing in this film and that alone will knock Hollywood’s conventional wisdom on it’s collective ass and it is about time. The reason Jake Gyllenhaal and Heath Ledger will rise with this experience is because they are wonderful actors and this is a seminal American film. Watching this I felt as if I was seeing something akin to “Coming Home” or “Midnight Cowboy”, a film that was originally perceived to be daring but the when the public embraces it the media backs down.  It’s a film America has been ready for but Hollywood has yet to deliver until now, kind of like our pull-out from Iraq which again the politicians are way behind the public. ABC tonight was referring to the film as the most sexually explicit film ever released which was the biggest bunch of hooey I’ve ever heard. This film is an American love story pure and simple and there (as always) is more straight sex than gay sex and there isn’t that much of either. The only good thing is that this kind of journalistic pablum will only increase viewership, you would think Disney had a financial stake in it.

Brokeback Mountain  is essentially for straight people in much the same way that “Philadelphia” was. Gay people know this stuff in shorthand as they live it every day so they don’t need it written out in longhand. Brokeback Mountain will be praised and lauded this year because it does what so much film doesn’t anymore, take you inside the human experience in a new way. Today we mostly go to new places in film via special effects and while that  can be exhilirating it isn’t emotionally as satisfying as seeing the basic human experience from a new angle.

I heartily recommend this to all who think you might like to see it. Supporting a film like this on Opening Weekend speaks volumes to Hollywood (who bottom line understands only $$’s) and the large numbers will tell the media that there is a larger group out there than the Fundamentalists, who this weekend will be showing up in droves for “The Chronicles of Narnia”.

The Republicans are Looters

What a real democrat sounds like. Or, how not to pander to the right.