The NYT has reported that another one of the problems with Medicare D(isaster) enrollment is that some people who are “dual eligible” are now enrolled in two insurance plans.  Shirley D. Beer, of Pennsylvania, has found herself in that very situation.  After being assigned to a Medicare D(isaster) plan that did not cover all 12 vof her rx’s, she chose a different plan, as it covered more rx’s than the one that she was assigned to.

However, she is still being covered under the first plan, that pays for some of her rx’s although she notified the carrier that she wanted to switch to a plan that covered more of her rx’s.

continued
Now, the administration has issued a memorandum to the insurers which reads

CMS now claims that it is currently working with the insurance carriers to resolve the discrepancies.  But, it is working slowly to prevent a massive disenrollment from policies as that could result in

a flood of inquiries and complaints to insurers and the government from puzzled beneficiaries.

Ms. Beer lives from month to month on a check for $603.00.  She also claims that the plan that she was assigned to (Gateway)

WellCare, the carrier that she chose, has not sent her an insurance card.

This situation occurs all over the country.  According to Christopher J. Decker, executive vice president of the Pharmacy Society of Wisconsin pharmacists find patients enrolled in two drug plans.

“The plans are often willing to cover the same prescription for the same beneficiary but charge different co-payments…This creates confusion and problems for patients and pharmacists alike.”

Another concern is stated by James M. Maister, a pharmacist Florida.  He also said that in cases involving Medicare patients enrolled in two plans,

“both plans have automatic deductions scheduled from the patient’s Social Security check.”

Marisa B. Duarte, of Medicare, said,

“We are still working out systems glitches, so having someone enrolled in two plans is common…[and federal caseworkers are able to]…verify the exact plan.”

If a person can get through on the phone, that is.  (My pharmacist has stated repeatedly that he has seen no difference in the day-to-day operations that he has to deal with, although officials claim that it is improving.)

Also, according to the NYT,

when a beneficiary switches plans, Medicare typically provides information on the person’s low-income status to only one of the two plans. The other may still be providing coverage without realizing that the person is entitled to a low-income subsidy. This helps explain why some low-income beneficiaries have received bills for premiums they do not owe — $25 or $35 a month — while others have been charged $40 for a drug at the pharmacy, when their co-payments are not supposed to exceed $5.

Jane-ellen A. Weidanz, the Medicare project manager at the Oregon Department of Human Services, said:

The paperwork that flows is supposed to work this way:  the government is responsible for the confirmation of any switching of Medicare D(isaster) plans.  For verification of this, a notice of disenrollment is sent to the original plan, and a notice of confirmation is sent to the plan that one switches to.  But, according to the NYT,

the government mistakenly sent both notices to the second plan, so the first plan did not know that the person had left its rolls…[rsulting in] some plans…quit processing disenrollments because they could not tell which notices were valid.

For over 20 years, Pennsylvania had its own program to help older adults with their drug costs. Thomas M. Snedden, director of the program, said

he was eager to help 200,000 Pennsylvanians enroll in Medicare drug plans that would meet their needs.

However, he is unable to do so, as

“the federal government cannot yet provide us with a complete, accurate list identifying which state residents are already enrolled in which Medicare drug plans and which people are entitled to low-income subsidies.”

Now, for another look at the numbers:

The Department of Health and Human Services says 24 million of the 42 million eligible Medicare beneficiaries are enrolled. Others say only 3.6 million have voluntarily enrolled in the new prescription drug plans.

the government said it would help insurers determine who should have paid which claims, so they could reimburse one another. If, for example, Plan A paid Medicare drug claims that should have been paid by Plan B, then Plan B owes money to Plan A. 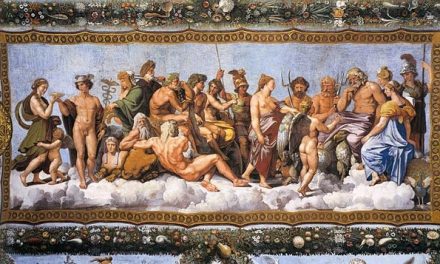 The Gods Must Be Angry

What Will the SCOTUS Do With Health Care?