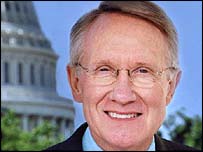 Most of you won’t have heard of this most likely as the news doesn’t seem to be covering it. Today, a real hero Senator Ron Wyden of Oregon filibustered the Senate today trying to get an up or down vote on his amendment, which would have capped at $55 a barrel any tax breaks for Big Oil. It was a sight to behold, for 5 hours on C-Span2 today Wyden explained in depth why this was important as oil profits have skyrocketed.

All was great, Republican oil whores like Pete Domenici trolled for the oil interests and finally left the floor in a total hissy yelling all the way. This should be on every news program but sadly may only make it on Olberman or Jon Stewart tonight.

The worst though was when that hack Harry Reid, the worst excuse for a Democrat after Lieberman and Zell Miller took to the floor and forced Wyden to stop. The Republicans didn’t take Wyden down, a Faux Democrat did. This pitiful minority leader will keep the party forever in minority status, it’s time to boot him out of the Senate once and for all.

Did God Tell Bush To Go To War?

and this isn’t frontpaged everywhere in the liberal blogosphere because…… ?

Because Harry Reid’s the Glorious Leader of the One True Party. And if kos or any of the other big-name bloggers make him look like the spineless lackey of the Republicans he is, they’ll lose any chance of ever becoming Party Insiders.

Nowhere on the front pages do we see this atrocity chronicled.

the Dem Party faxes to the (so-called) lefty blogosphere must be working overtime.

AND HE IS A PRO-LIFER as well! Throw in a few Bob Caseys in the Senate to work with him, and then tell me again what the democratic party stands for??

Re-election! Oh, and lining the pocketbooks of consultants like kos.

ah yes, the best pro-corporate, anti-woman, anti-worker Republican the Democrats have ever had as Senate Caucus leader!!!

By the way, it’s worse than I though, neither Olberman nor Stewart covered it last night (at least not what i skimmed through on either one).

You’re right wilfred, as far as I know, this was completely unreported in the MSM-assholes again.  It’s just this kind of shit that drives me nuts-when a democrat does do something very very good it usually gets no press at all.  I wouldn’t have know about this except for your diary and then a few places like truthout.org which covered it.