Our motto?  Defeating Republicans through diet and exercise!

Earlier in the week I stumbled onto The Hacker’s Diet which was developed by John Walker (one of the programmers of AutoCad.)  After being fat for most of his life, he decided to treat the problem of controlling his weight like any other problem to solve.  And he set out to debug himself.

I’m awed by his work.  The information is balanced by a lot of illustrations & a light voice.  Which is important because his background as a programmer is reflected in the level of detail and the technical nature of his analogies.

Which I think will fit perfectly into my idea of not eating between meals and not taking seconds!

In addition to that, I’ve been trying to work exercise into my daily routine.  Here’s a series of photographs of me getting started (reprinted from Getting Fresh Air at Eat4Today):

And a side view:

And pull those arms back!

Whew! That’s about it for today.

(I just found this experiment.  Here I am doing the same thing at work)

Here in Kansas City, we’ve got rain coming in two shifts today so I’m glad I got out yesterday! 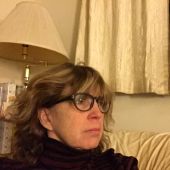 Get out of Iraq. Healthcare & a Living Wage for everyone. Two sentences: A Democratic Platform.

The Emperor is Actually Crazy

Some thoughts about the VP Debate

I’m intrigued about this whole hackers diet thing. I come from a family with a history of diabetes, so I’ve been careful with my weight for twenty years. I have a max weight which I allow myself to reach and a minimum target weight that’s about fifteen pounds below that, so any time that I find myself heading for the upper end, I eat a little bit less and exercise a little bit more for a while. When I get back toward the low end I relax a bit, but don’t count it as a license to do whatever I… Read more »

It’s interesting that you do that, Kelly.  Have you always been so successful at controlling your weight?  Or did you once have a period of being a bit over?

And is it work for you?  Does your Eat Watch work, or is it broken?

I’ve never been significantly over my upper end, which is 205. I think I hit 215 once, but that was only for a month or two and I got myself headed in the right direction pretty soon after that. It is a bit of work, but not an enormous amount. The hovering specter of family diabetes makes for a good stick. So does the thought of having to buy new clothes. That’s actually one of my gauges. When my clothes start feeling a little tight, I start weighing myself, otherwise I’ll go for months without getting on the scale. I’m… Read more »

I know that the tight clothes thing wouldn’t work for me.  Because it never has.  I just buy slightly bigger clothes.

For me, my little set of rules (and a public blog) has been the only thing to work for any extended period of time.

And I’m glad the signature works for you.

I’ve been reading your website (waiting for my password at present), and thinking about the Hacker’s diet. My trouble is lack of exercise, stress, and having no will power when food is present. I don’t really overeat, but I sure do undermove, compared to past years. We moved to a more urban, less safe for walking neighborhood, and now my parking is right next to where I work, etc.   I admire your “no eating between meals”, but for me, what’s worked in the past has been never to restrict between meals, but to have tons of veggies and a… Read more »

“…but I sure do undermove…” – that describes it perfectly for me too! Good word. 🙂

I wasn’t complaining about the wait for the password – I’m on my husband’s computer, so I had it sent to my work e-mail, and web-mail at work is just glacial about checking new mail. (I guess with global warming, I’m going to have to come up with a new metaphor for really slow stuff!).

Kb, your Eat 4 Today motto was really helpful to me this week and I could see that it’s lodging itself in my psyche. The day of my mom’s birthday party I let go of all restraint and ate cake and then more cake, took seconds, ate between meals,the whole schmear. But at every moment I knew that even that was Just 4 Today. Instead of thinking, oh now I’ve done it, I’ll be eating like this for weeks, I thought without guilt or angst, “No, this, too, is Just 4 Today. I don’t have to do this tomorrow if… Read more »

Your comment that day inspired today’s Commitment story.  I hope you don’t mind.

Not only don’t mind, but I’m going to plagarize myself and post my comment about it there, too.

Thanks for the link.

This sentence from John Walker is so true:

Most extraordinary things are done by ordinary people who never knew what they were attempting was “impossible.”

I thought that was a terrific sentence too.