.
General ‘Bogie’ Yaalon represents the hardliners which includes Liberman, Bennett and Netanyahu himself and a majority of Israelis. These cabinet members act in bad faith as there is no vision for a two-state solution for a viable independent Palestinian state alongside Israel. These pure Zionists as they themselves claim, follow the policy of Ariel Sharon and his predecessors. It is due to the perseverance of president Obama and Secretary Kerry to bring parties together and it’s time to bash some heads together. Both the White House and State have reacted to virulent words and provocation by Israel’s Defense minister Yaalon. Not a surprise, see Tikun Olam – Bogie Yaalon Takes it to the Delegitimizers! POW!. 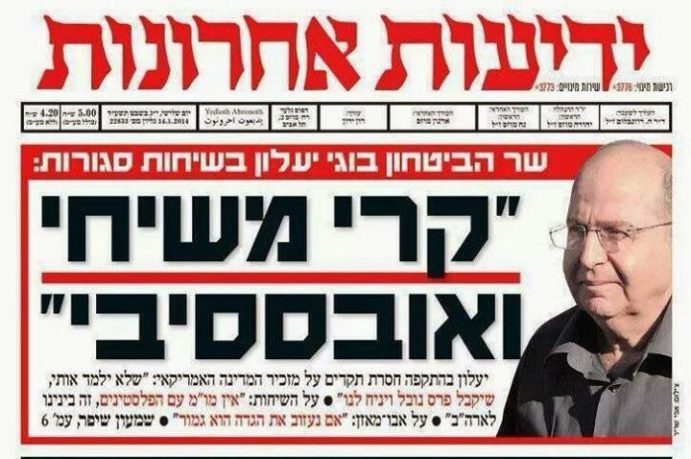 (JPost) – The office of Defense Minister Moshe Ya’alon on Tuesday would neither confirm nor deny comments attributed to him calling US Secretary of State John Kerry “obsessive” and “messianic.”

Tuesday editions of the daily tabloid Yedioth Ahronoth  quote Ya’alon as telling associates in private conversations that Kerry “should take his Nobel Prize and leave us alone.”

“Abu Mazen lives and dies by our sword,” Ya’alon is quoted as saying by Yedioth. “Once we leave Judea and Samaria, he is finished. In effect, during these past months, there haven’t been negotiations with the Palestinians, but with the Americans.”

“The only thing that can ‘save’ us is for John Kerry to win his Nobel Prize and leave us alone,” the defense minister reportedly said.

Source in Defense Ministry told Israel Radio: “All along [Ya’alon] has expressed deep concerns that the diplomatic process could lead to missiles on Tel Aviv and Ben-Gurion Airport. He doesn’t intend to compromise on Israeli security even is he is called a hard nut to crack.

The remarks elicited angry reactions from both within the government and the opposition.

Strategic Affairs Minister Yuval Steinitz (Likud) said of Ya’alon’s purported statements, “I agree with content. But with all our disagreements we need to follow one rule: We must refrain from personal insults.”

Labor Party MK Omer Bar-Lev assailed Ya’alon for the comments. “Publicly clashing with the Americans is irresponsible and damaging to Israel’s security, international standing, and its relations with the United States,” said Bar-Lev, a member of the Knesset’s Foreign Affairs and Defense Committee.

“Ya’alon’s statements are testament to a narrow, military view of the needs of the State of Israel and painting them in shades of black and white,” Bar-Lev said.

…
Following the reports, Ya’alon’s Bureau released a statement which contained a pledge to smooth over divisions with Washington, but not a denial of the reported remarks.

Ya’alon vowed to continue to safeguard the security of Israeli citizens with “determination, responsibility, and sound judgment.”

QUESTION: Yes. The minister of defense for Israel is quoted today as saying that Secretary Kerry is aggressive and messianic and let him – I’m quoting him – let him get the Nobel Prize for peace and leave Israel alone, and that the paper on which the security plan of the United States, as far as the Jordan Valley is concerned, is not worth the paper it’s written on. Do you have a reaction?

MS. HARF: We do. If these comments are accurate, we find the remarks of the defense minister to be offensive and inappropriate, especially given all that the United States has done to support Israel’s security needs and will continue to do. Secretary Kerry and his team, including General Allen, have been working day and night to try to promote a secure peace for Israel because of the Secretary’s deep concern for Israel’s future. That’s precisely why the Secretary and his team have been working so hard here. To question his motives, to distort his proposals, is not something we would expect from the defense minister of a close ally, and again, if accurate, I think we’ve been very clear that we would find these comments offensive and inappropriate.

(Haaretz) – Senior American officials said that the United States was not satisfied with the Israeli government’s response to Ya’alon’s remarks and expected Netanyahu to issue a public condemnation.

“We expect the Prime Minister to put this right by publicly expressing his disagreement with the statements against Secretary Kerry, the negotiations with the Palestinians and Kerry’s commitment to Israel’s security,” said a senior U.S. official.

Defense Minister Moshe Ya’alon apologized late Tuesday for his outburst against U.S. Secretary of State John Kerry, which caused a serious diplomatic incident between the two countries. In a statement issued just before midnight, Ya’alon apologized for “insulting” the secretary of state in calling him “obsessive and messianic.”

Is Bibi Shedding His Peace-Seeker Pose?  by J.J. Goldberg

(Forward) – Lately, though, it looks like Bibi has given up trying and is now opting for Plan B: telling Europe, America and the rest of the world to go to hell. On a practical level, he seems to be doing everything he can to short-circuit the talks, blame or no blame.

…
If construction were Bibi’s only negative signal, the sop-to-the-right argument might make sense. But it’s just one in a series. There is, to begin with, the fact that his two most senior ministers, Foreign Minister Avigdor Lieberman and Defense Minister Moshe Yaalon, have both stated repeatedly, in the most public manner imaginable, that they believe the peace talks have no chance of success and that Abbas is the problem and is no partner for peace. One of the main Israeli criticisms of Abbas, ironically, is that he frequently and his aides regularly accuse the Netanyahu government of actions that sabotage peace.

Obama On Path Towards Grand-Slam In Diplomacy [Update]

Did the Russians Mess With the Voter Rolls?