Brexit by the numbers

The Economist has produced an index which lists all EU member states by their stances on what the Economist claims are the four key issues surrounding the negotiations (h/t Bernard): 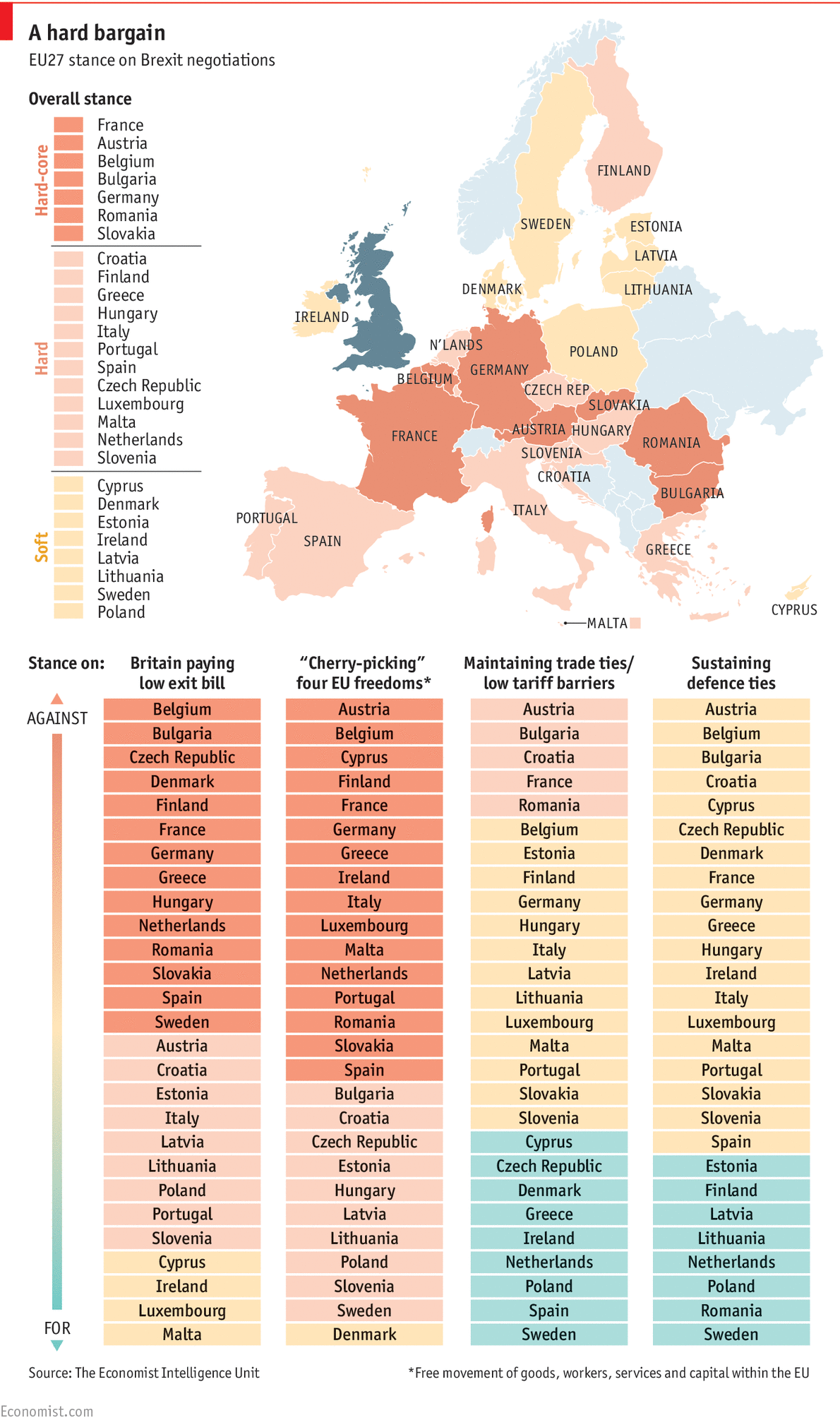 Article 50 of the Lisbon Treaty provides that any Brexit agreement has to be passed by qualified majority vote on the European Council as well as by simple majority in the European Parliament. This raises the interesting question as to which EU member state leaders Theresa May must win over if she is to get any agreement. I do the maths below.
Let us assume for the moment that the Economist is broadly correct in its assessment of where each country stands at the moment, and that it has correctly identified the key issues which will determine the final attitude of each member state to an agreement. I, for one, was surprised to see Spain not listed amongst the 7 hard core hard Brexit proponents. If there is much more jingoistic warmongering talk over Gibraltar, I suspect the Economist might soon be moving Spain into the “Hard Core” column.  However we can adjust the maths as the negotiations progress, and as national attitudes become clearer.

The European Council qualified majority voting procedure is defined by Article 238(3)(b) of the Treaty on the Functioning of the European Union as follows:

a) A qualified majority shall be defined as at least 55% of the members of the Council representing the participating Member States, comprising at least 65% of the population of these States.

A blocking minority must include at least the minimum number of Council members representing more than 35% of the population of the participating Member States, plus one member, failing which the qualified majority shall be deemed attained;

(b) By way of derogation from point (a), when the Council does not act on a proposal from the Commission or from the High Representative of the Union for Foreign Affairs and Security Policy, the qualified majority shall be defined as at least 72% of the members of the Council representing Member States comprising at least 65% of the population of these States.

Under both sections (a) and (b) above, therefore, countries representing at least 65% of the population must approve a proposal. In addition, under section (a) at least 55% of member states must approve.  That goes up to 72% if the proposal does not have the support of either the Commission or the High Representative of the Union for Foreign Affairs and Security Policy. Bizarrely, a Commission Press Briefing appears to assume that that would be the case.

Let us stipulate, for the moment, that any putative Brexit agreement would not be put to a Council vote without the support of either the Commission or the High Representative, and so the 55% of members rule would apply. This means that any 13 Member States could form a blocking minority if the 55% is based on the full 28 members, or 12 Member states if it is based on the 27 remaining members.

Article 50 of the Lisbon Treaty continues:

Does this mean that the UK is effectively excluded not only from the vote, but from the calculation of what constitutes 55% of the Member States and 65% of the population? The European Council Qualified majority voting calculator makes no reference to this unprecedented situation and bases its calculations on all 28 member states, so I will use that as the basis of the calculations below.

The Economist lists 8 countries as favouring a “soft Brexit” – Cyprus, Denmark, Estonia, Ireland, Latvia, Lithuania, Sweden, Poland – who make up 8 out of 28 = 29% of EU members and 13% of total EU population – much less than the blocking minority of 13 member states or 35% of EU population that is required to block an agreement. They would not therefore be sufficient to prevent the European Council approving a “hard Brexit” agreement.

However the 7 counties identified by the Economist as Hard Core hard Brexit proponents – France, Austria, Belgium, Bulgaria, Germany, Romania, Slovakia – make up 39% of the EU population and could thus block any Brexit deal not to their liking. To get a deal approved by the Council, the UK would have to persuade either Germany or France to approve it, or failing that two or 3 of the smaller countries in this “hard core” list of 7.

A tall order. If Spain or some other country not currently listed in the “hard core” column joined this group, overcoming a blocking minority would become next to impossible. Achieving the required simple majority in the European Parliament should be relatively easy by comparison, although that would depend on the attitude taken by the major political groupings within the parliament, which remains to be seen. Nigel Farage has not exactly been going out of his way to make friends in the European Parliament.

So the bottom line is that the “Hard Core” hard Brexit countries hold an effective veto on whatever Brexit deal might come out of the negotiations. Effectively that means the UK must convince either France or Germany of the merits of the deal, and given that Germany regards itself as the guarantor of the integrity of the EU and Boris Johnson has gone out of his way to antagonise the French, that means any deal has to be seen to be very much in the interests of the EU. That in turn means it has to be very clear to all EU members that the benefits of membership very much outweigh the benefits of leaving.

Perhaps recognising this reality, Theresa May has already been repeating that “No deal is better that a bad deal”. Based on these numbers, that is very likely what she will get. The question then becomes “what comes next” after a cliff fall exit. Will the EU seek to apply tariffs on UK exports to recover the budgetary monies it claims it is owed? How will the EU respond to an erosion of its competitive position that a massive further devaluation of Sterling would create? What do people mean when they say WTO rules would apply when there is no WTO agreement on tariffs and quotas between the UK and the EU?

The EU was created to secure peace and prosperity on the European continent after the horrors of two world wars. The UK may be about to discover what happens in its absence.

The Daily Pulse- Google and Oil

The more the numbers keep coming in on how bad this is going to go for the UK, the more I keep thinking the UK is going to end up looking like something out of V for Vendetta…

Does this mean that the UK is effectively excluded not only from the vote, but from the calculation of what constitutes 55% of the Member States and 65% of the population? Yes, of course. That’s the obviously fair way to do it and odd interpretations won’t stop it. I wouldn’t expect anybody to even try. Just eyeballing the various stances indicates the “obvious” outcome is likely – low tariffs and light travel restrictions, but no financial passporting or customs bypasses, same as with other major friendly countries like the US and Japan. Either Germany or France as the decision-maker looks… Read more »

Britain set to lose EU ‘crown jewels’ of banking and medicine agencies | The Guardian | The EU is set to inflict a double humiliation on Theresa May, stripping Britain of its European agencies within weeks, while formally rejecting the prime minister’s calls for early trade talks. The Observer has learned that EU diplomats agreed their uncompromising position at a crunch meeting on Tuesday, held to set out the union’s strategy in the talks due to start next month. A beauty contest between member states who want the European banking and medicine agencies, currently located in London, will begin within… Read more »

The EU’s negotiating priorities are clearly political, while the UK’s are economic.  If it can’t get ANY of the 27 to agree it’s priorities, the UK is starting from a very bad place.

The EU is burning bridges. Brits will not forget.