I’ve never liked the idea of electing judges. We didn’t do that in New Jersey when I was growing up. Now that I live in Pennsylvania, I am asked to vote for judges all the time. To my mind, a judge who needs a vote is a politician. I can’t understand why anyone would want a politician serving in the role of a judge.

People tell me that it’s important that judges are accountable. We can’t just have them ruling any old way.  If they rule the “wrong” way, why should they be kept their jobs? I find that argument deranged.  That’s not how elections work. We don’t often vote people out for doing the wrong thing. Most of the time, we pick a team and stick with it come hell or high water.  We rarely switch teams because of how someone voted or decided a case. We’ll switch teams only when we change ourselves, usually in response to big events that shake up our worldview.  A judge is more likely to be voted out of office because the governor of his party is presiding over a bad economy than due to an unpopular ruling.  It’s also in the nature of justice, that many good rulings are unpopular.  We get better results when judges are free to focus on the facts before them rather than having to worry about lynch mobs waiting at the ballot box.

When it comes to having a trial to determine if the president of the United States should be removed from office, the Constitution says that the jurors shall be the members of the U.S. Senate. This arrangement demonstrates my point about the problem with using politicians as judges.  That’s why I wrote “The Founding Fathers Screwed Up the Impeachment Process.”

As the House Democrats try to decide whether or not to initiate impeachment proceedings against President Trump, the backdrop is a Republican-controlled Senate that is anything but impartial.  It’s a like a prosecutor who has a strong case but knows the judge is unlikely to give them a fair shot because the defendant is his son-in-law.  Since they’re unlikely to win in court, the prosecutor has to decide which is worse: letting someone get away with a crime or letting someone guilty be found innocent?

If it’s true, as Nancy LeTourneau suggests, that the White House is trying to goad the Democrats into impeaching the president, the reason is that they know the process is rigged in their favor. They need to arouse passion in their base because they know Trump’s opponents are already highly motivated to toss him out of office next year. An impeachment trial would serve that purpose.

Nancy Pelosi, serving as the leader of the Democrats and the Speaker of the House, seems to sense a trap. She doesn’t want to start a fight she cannot win in the straightforward sense of gaining a conviction in the Senate.

President Trump, who is refusing to cooperate with more than 20 congressional investigations, instructed current and former aides Wednesday to ignore a House committee’s request for documents in the latest act of defiance that has prompted Democrats to declare the nation is facing a constitutional crisis.

But House Speaker Nancy Pelosi (D-Calif.) told Democrats in a closed-door caucus meeting Wednesday morning to stick to their policy agenda ahead of the 2020 election rather than initiate impeachment proceedings.

Speaker Pelosi understands that this is a political fight rather than a judicial trial. The fact that she’s not likely to win the trial makes winning the politics even more important. In other words, her best shot at coming out on top is to lose really well. Any long-shot chance she has of convincing the Senate to convict Trump will depend on the president going too far so that she can convincingly portray herself as compelled to act to defend Congress as an institution.

It’s a savvy strategy, but it has one significant flaw. The White House is fighting congressional subpoenas using a legal theory that Congress must have a legislative purpose for demanding testimony and documents from the White House and its advisers. I wrote about this extensively in two recent pieces: “Congress Needs to Lock ‘Em Up” and “No, Trump Doesn’t Want to Be Impeached, But He Will Be” (available by subscription).

The first tells the history of Congress’s inherent contempt power and explains how the House Democrats can arrest or fine non-complying witnesses and put them on trial. It also explains the legal limitations of the inherent contempt power. Congress must either have a legislative purpose for seeking testimony and documents or they must be acting in one of their other constitutional roles, e.g., overseeing federal elections or conducting an impeachment proceeding.

The second expands on this to explain how having an impeachment process already underway is the best legal strategy against the White House’s “no legislative purpose” defense for their noncompliance with subpoenas.  In short, the Democrats will win in court if they can argue they need to get documents and testimony because they’re trying to decide whether or not to impeach the president.

This is the exact same point Nancy LeTourneau makes when she examines the letter of White House counsel Pat Cipollone.

The letter repeatedly states that “the requests run afoul of the Constitution by encroaching upon authorities that the Constitution assigns exclusively to the Executive Branch.” Cipollone further states that “the Committee’s inquiries must be tied to a valid legislative purpose—that is, they must be tied to evaluating or formulating potential legislation on some subject within the Committee’s authority.”

…But another thing that screams out from Cipollone’s letter is that the one “valid legislative purpose” congress could constitutionally undertake would be impeachment. All of his arguments against cooperation go out the window if that is the purpose of the requests. I’m not suggesting that the White House would comply if these documents were requested for the purpose of an impeachment proceeding—just that they’d have to construct a whole new argument.

I don’t think it’s quite right to say that the administration wants to force an impeachment proceeding. It’s more accurate to argue that they aren’t going to willingly comply in the absence of an impeachment proceeding. So, I don’t agree that they’re goading the House Democrats and setting a trap. I’d put it differently. Their least bad option is to stall, delay and obstruct so that damaging information can be kept from view for as long as possible. If it eventually comes out, they can still hope to prevail at trial because they have control of the jury. And, while there are certainly downsides to getting impeached, they also know that the process would galvanize their base.

It could be that Pelosi is being too patient. But she is going to make sure that if she has to give the go-ahead for an impeachment inquiry that as many people as possible perceive the decision as made with extreme reluctance rather than eager partisanship. The biggest mistake she can make here is to fall prey to a form of reverse psychology. If she believes she cannot impeach because that’s exactly what Trump wants her to do, then she really will have fallen in a trap.

Changing the Police is Better Than Defunding Them 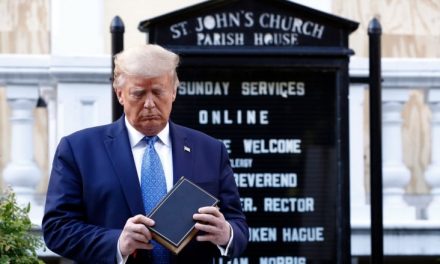 Bloomberg Promised to Help Defeat Trump But Then Came COVID-19