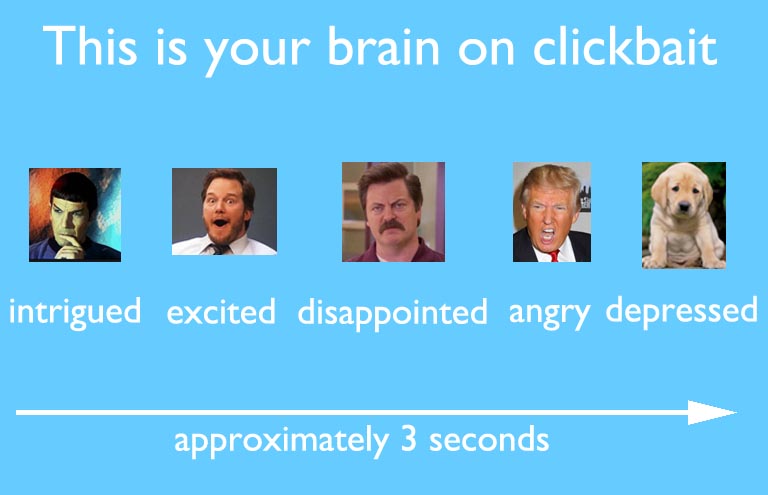 An exchange between presidential candidate Senator Bernie Sanders and NBC’s Chuck Todd has been making the rounds courtesy of Mediaite, and it’s got some reproductive rights advocates hoppin’ mad.

“Are you in all concerned, though, about this idea that people may try to worry about the sex of a child, or essentially, are those types of restrictions on abortions something you’re open to?” Todd asked.

“That, I mean, that’s a concern,” Sanders said as Todd was asking, then answered, haltingly, “Well, that’s not a, I wouldn’t use a restriction on, that’s an issue that society has got to deal with, and it is of concern.”

“How would you deal with that in the law?” Todd asked.

“I don’t know how, at this particular point, I would deal with it, but that is an issue that we really have got to deal with,” Sanders replied.

Sanders seemed unprepared for the question, and perhaps unaware that reproductive rights organizations like NARAL Pro-Choice America and Planned Parenthood uniformly oppose laws restricting abortions on the basis Todd cites for a number of reasons.

But I also saw that Tara Murtha, who’s something of an expert when it comes to abortion law, turned up her nose at the whole thing, and it quickly disappeared from my consciousness.

Later that day, however, I noticed that a Facebook group called “De-Fund the Komen Foundation” had also posted the article, with a very different take. 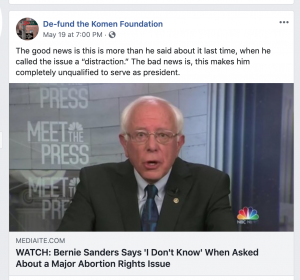 Knowing that Chuck Todd is, at best, an utter doofus; seeing no particular expertise in abortion law by writer Tommy Christopher; and having the foreknowledge that an actual expert on abortion had pooh-poohed the article, I asked if anyone had fact-checked the article. After all, sites like Mediaite and others have a business model that’s based on readers clicking on inflammatory headlines. So I wanted to know if this was a really important issue -especially given Sanders’ longtime support for reproductive rights- or if the writer was making a mountain of a molehill, even inadvertently.

The moderator and I had an angry exchange followed, which to be honest, shouldn’t have surprised me. Facebook’s business model is also based on readers clicking on inflammatory headlines, and abortion arouses the passions like no other topic. In some ways we were yelling past each other, but in the end I said I would get to the bottom of it for the sake of accuracy. In short, we were kind of both right.

“Sex elective abortion is absolutely not a major issue,” Murtha told me in an email exchange. “It is based on a racist stereotypes about which types of Asian and immigrant women need to be more closely surveilled when pregnant. The federal sex selective ban attempt in 2013 (I think will get link) was explicit about this.”

“This is the first time since I’ve been following abortion politics I’ve even seen it coming up. First here in [Pennsylvania], and then in that Bernie interview,” she added. “In Pennsylvania there’s currently a bill HB321 that’s “a Down Syndrome ban” but also expands the criminality of the sex-selective ban on the books by removing the word ‘soley’ as in ‘soley based on.'”

“In the decades the sex select [ban] has been on the books in Pennsylvania, not one doctor or one and has been charged with it as far as anyone knows,” Murtha said. “It is therefore unnecessary in addition to being unconstitutional.”

“The question of framing sex selective abortion as a thing that needs addressing is bullshit,” she added, but slammed Sanders’ ignorance as well.

“Bernie’s answer confirming or stating that it is a major issue is also bullshit,” she said. “He is running for president. He should know this.”

She’s right of course. Watching the video it’s clear that Todd is engaging in bad faith questioning, and Sanders is blindly walking into it. It’s an embarrassing moment to be sure. But is it reason to claim he’s “completely unqualified to serve as president?”

I would argue a fumbling and stupid answer, by a candidate with a long history of supporting reproductive rights, to a fundamentally bad question from a bad faith interviewer should not be the deciding factor. You may disagree.

I wish that more people would get hip to fact checking. We’re writing for an audience, whether we’re mainstream journalists, bloggers, opinion writers, or moderators of Facebook groups. We all know what happened in 2016, with the outright lies and rumormongering in social media. The stakes are even higher in 2020. We cannot afford to mislead our readers, even by mistake. And when we do, we need to retract and clarify.

As the old saying goes, “a lie can travel halfway around the world before the truth can get its boots on.” We have a responsibility to get it right to the best of our ability. Our democracy depends on it.