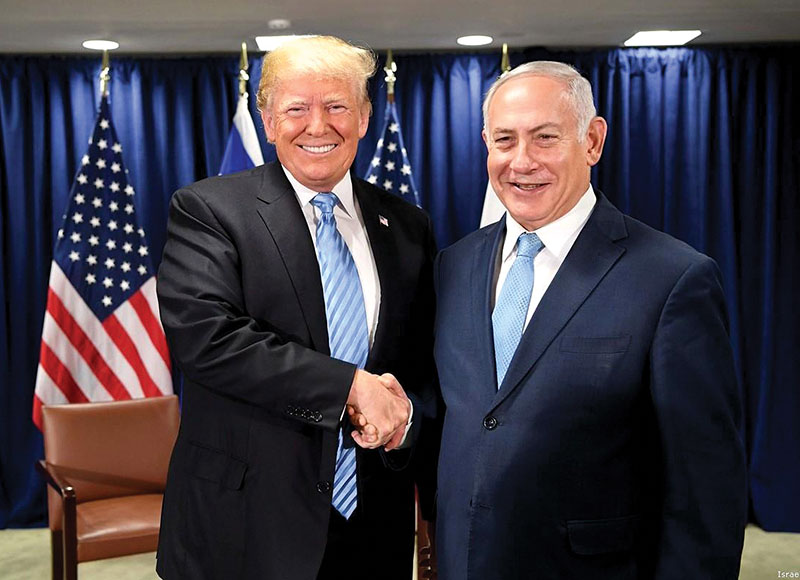 I could wish things were a bit decisive at this point, but it sure feels like a great fiftieth birthday present to wake up and find this in my morning Jerusalem Post:

The posters of Prime Minister Benjamin Netanyahu and US President Donald Trump in Jerusalem and Tel Aviv awkwardly remain hanging, like January Christmas decorations or a November sukkah.

The results of Tuesday’s election appeared to indicate that the slogan “Netanyahu: In Another League” was not as persuasive as the creative minds in Likud envisioned.

But maybe it was not the slogan that was ineffective, but the relationship itself between Netanyahu and Trump.

They are still counting the votes in Israel, but it is beginning to look like Bibi’s charmed political life has come to an end. Gen. Benny Gantz has bested him.

No single party has enough votes to form a majority in the Knesset, but it’s doubtful that Netanyahu will get the first crack at forming a majority coalition. Not only did his party come in a narrow second place, but so did his unofficial bloc. In addition to that, there are a couple of factors that argue against Netanyahu continuing on as the leader of the Likud Party.

First, Avigdor Lieberman’s party has doubled the support it had in the indecisive April election, making him an obvious kingmaker in this do-over. He is refusing to join any government that includes religious or sectarian parties, which means that he won’t get behind Netanyahu’s bloc. If a government will be formed, it will have to be based on the Blue and White Party’s strength. But the Blue and White Party will not join in any coalition with Likud unless it jettisons Netanyahu because he is facing multiple indictments. Taken together, these two conditions preclude Likud from being part of the government unless their offer new leadership.

On the other hand, Lieberman is also ruling out joining any government that includes the Arab parties, so the Blue and White Party will need Likud if they want to succeed in forming a coalition. As things stand, this still gives Netanyahu a tiny bit of life. If Likud won’t yield, it’s probable that Blue and White’s effort will fail and perhaps they will be offered a chance to form a coalition before everyone gives up and a third election is called. It’s just hard to see how this can end with Netanyahu still in the position of prime minister in Israel.

Mr. Netanyahu’s story isn’t over. His reputation for outmaneuvering political opponents and preserving his hold on power as Israel’s longest-serving prime minister earned him the nickname “the magician.”

For now, Likud officials say they are sticking with Mr. Netanyahu, giving him a large political base of support. Likud has pressured Mr. Gantz and his Blue and White party to form a unity government with Mr. Netanyahu.

Mr. Netanyahu could also try to convince political parties such as Mr. Lieberman’s Yisrael Beiteinu or the Labor party to abandon their campaign promises and sit with him.

But both Mr. Lieberman and Labor seemed unwilling to do that on Wednesday, potentially looking instead to the potential for fresh leadership in Israel for the first time in a decade, with a new crop of leaders promising a less divisive politics.

Netanyahu was depending on a win yesterday to stave off corruption charges. In October, Israel’s attorney general will decide whether to take him to trial. He could wind up in prison.

This might be a precursor to similar events in America should Trump lose his reelection bid in 2020.

Whether Trump and Netanyahu wind up incarcerated or not, the whole world will be a lot better off with both of them out of power. So, yeah, so far I’m not feeling so badly about being a decrepit old man.