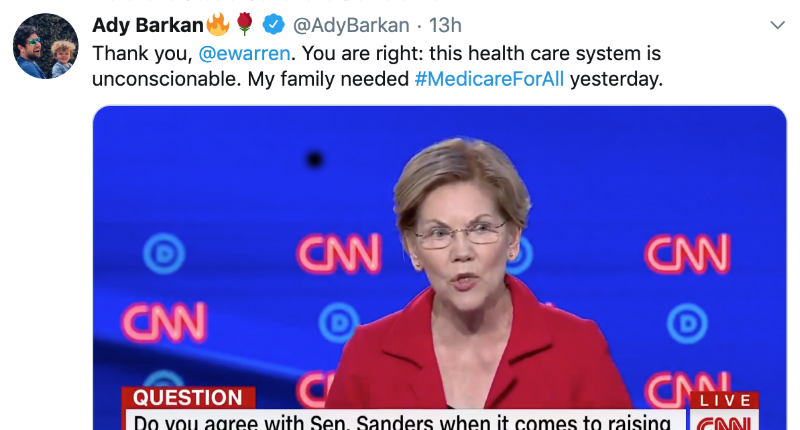 I have been busy building things, but I have noticed that there is some concern on the right (and I assume the left) about what will happen to health insurance workers if Medicare For All becomes the law of the land (it won’t, we don’t do big change here). Specifically, Fox News and something called the Daily Wire are upset that Elizabeth Warren said of her plan, “Some of the people currently working in health insurance will work in other parts of insurance. In life insurance, in auto insurance, in car insurance. Some will work for Medicaid.”

This sounds an awful lot like Warren is claiming ‘If you like your job, you can keep your job.” It also sounds like the much criticized “learn to code,” a skill journalists suggested displaced coal workers learn but then claimed the phrase was harmful when suggested back to them.

It is not so easy, even with the five-year transition plan to move one entire industry (health insurance) into another (car or life insurance). There are not 600,000-plus job openings in the other insurance industries to accommodate those people, and that’s not even factoring in where the jobs might be if they were available. We’re talking about thousands upon thousands of people potentially needing to move in order to transition into another type of insurance. That’s a ton of people whose lives will be uprooted due to Warren’s plan.

This is a fairly hilarious plea, given that conservatives have frequently exhorted the poor to move to where the work is (I cannot remember which conservative brainiac was called out less than a decade ago for shitting all over the poor whites of Appalachia and telling them to move out of the holler, but if I did I’d link to him). But seriously, what is the big deal here? Job transitions have been a way of life in the United States for nearly a quarter century.

I am old enough to remember watching then-candidate Bill Clinton and George H. W. Bush agree that the new reality for Americans was “employability,” not “job security.” Young people like me—I was probably about 21—should expect to change careers several times over the curse of our lives. It was pitched as a good thing.

I’ll hold off on commenting about how that new reality has panned out for people like me, but they were correct. I was a line cook and kitchen manager until I was almost 30, and a development professional and fundraiser until I was about 45. I’ve worked as a journalist and writer, and now I’m a stage carpenter. I’ve even been a small (if illicit) businessman, doing lawns and landscaping under the table during a long period of underemployment in Philadelphia.

My family, by the way, moved from New York City to Rhode Island for my father’s job back in 1975. Later, they moved to New Jersey. My father lives in Pennsylvania now. I moved to Nashville to pursue a change in career. My ex—an immigrant worker pursuing a green card—moved to New Jersey because her job told her she had to. I’m on LinkedIn, and my page is filled with updates from friends and colleagues who are changing jobs, looking for new positions, advertising their availability. According to NPR, a little more than 10% of us are independent contractors.

So if I can be retrained and change careers regularly, if auto workers and coal workers and factory workers can be retrained, if everyone I know can learn new skills and is expected to change careers several times over the course of their lives, and if relocation for work isn’t anything new in the employment world, why should health insurance workers be any different? Did customer service skills, call center skills, paper-processing and signing and administrative skills, accounting skills, and marketing and communications skills suddenly become non-transferable? Will the enormous new bureaucracy that Medicare for All will require—and no complaints about THAT, conservatives, when y’all signed off on the TSA and DHS—not require those very same skill sets at the federal, state, and local levels?

This strikes me as a very silly proposition, and I am sorry-not-sorry if I don’t sound sympathetic to the plight of health insurance workers. This isn’t even an argument in support of or against Medicare for All: I’ve said before that I support anything that works.

But don’t come at me with this crap “awful Elizabeth Warren says health insurance workers can go get other jobs in other related fields, isn’t she awful” argument. That’s exactly what they can do, just like the rest of us have been doing for years.

Part D — Higher Cost of Health Care for All

Without going into enough detail to selfdox, the health insurance industry is more than the skills needed to transfer from one insurance style to another. There is also a whole health analytics side that will still need to be tended to by people dealing with it on the insurance side. That is another level of job shift. In addition, the data management side of health insurance from multiple private insurers is something that will take a long time and a sizable analytical effort. And since there is enough that is quirky within medical care when you go from one state… Read more »