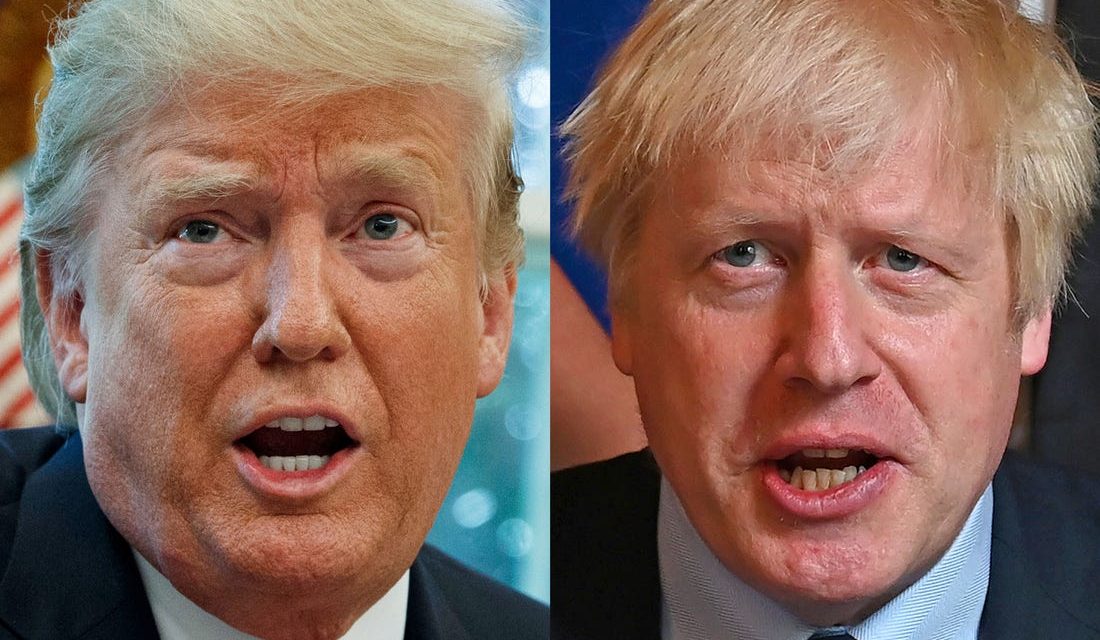 While Russia played a role in convincing the United States to vote for Donald Trump and the United Kingdom to vote for Brexit, it only has so much influence. Ultimately, Putin needed very stupid populations to do very stupid and self-destructive things. So, how did the US and the UK get so stupid?

It’s now an urgent question because stupidity has translated directly into death. The Financial Times reports that twice as many Brits have died as are listed in official reports:

The coronavirus pandemic has already caused as many as 41,000 deaths in the UK, according to a Financial Times analysis of the latest data from the Office for National Statistics. The estimate is more than double the official figure of 17,337 released by ministers on Tuesday, which is updated daily and only counts those who have died in hospitals after testing positive for the virus. The FT extrapolation, based on figures from the ONS that were also published on Tuesday, includes deaths that occurred outside hospitals updated to reflect recent mortality trends.

In fact, the pandemic almost took the life of Boris Johnson, the UK’s “Brexit” prime minister, who insisted on shaking hands as a sign of defiance against the seriousness of the outbreak. On this side of the pond, Donald Trump acted similarly, holding his trademark MAGA rallies through March 2, as the virus silently spread throughout the country.

Even using the official numbers, the US and UK rank 1st and 5th in total Covid-19 deaths, while ranking 42nd and 56th, respectively, in tests per million in population. The actual fatality numbers are surely far worse, but the UK rates 5th and the US 13th in deaths per million in population. Considering the strength of their health care systems, this is an abysmal result. This is only happening because of the stupidity of voters in each country, which enabled cripplingly stupid and inept leadership.

It’s hard to say how the leaders of the Atlantic Alliance become so idiotic, especially when they started out with such well-educated and industrious populations. Some people will blame video games, but every country has video games. Others will point to the influence of right-wing media, but few countries have freer and better-trained journalists. I’m more inclined to blame the end of the Cold War.

Ironically, old school conservative thinking predicts that organizations that don’t face stiff competition will grow bloated, corrupt, inefficient, and lose the ability to innovate. This is one of their biggest arguments against big government and government=run health systems. In the past, it formed their rationale for supporting tough antitrust policies. Competition keeps people sharp, as does the threat of nuclear annihilation and the resulting focus on science that dominated in the West through the mid-to-late 20th Century. Competition keeps people sharp and prevents them from resting on their laurels.

Once the USSR came apart, however, the US and the UK lost their edge. Sitting on top of the global food chain seemed like a reward for virtue, but the work that went into it wasn’t understood or respected. While voluntary armies were sent around the world to invade and occupy peripheral powers, at home we started to lose our educational advantage and the national calling to be first in knowledge.

In the US, the Gingrich Revolution was the first sign that America was turning away from what had put it is such a commanding position. Pretty soon, the country would see leaders like George W. Bush, Sarah Palin, and Donald Trump emerge, none of whom would have been thinkable to a country that was aware of facing serious global competition.

The resulting destruction is almost unimaginable. The US and the UK are now doing almost the worst job in the world of protecting their citizens from the outbreak of the novel coronavirus, and this is in spite of still maintaining massive advantages over most other countries. It’s entirely attributable to stupid leadership that was enable by stupid voters.

It turns out that waving a flag and boasting that “Were No. 1” is no substitute for being hungry for knowledge and determined to lead the world in education.

Things That Make Me Wish We’d Lost the Civil War

Moussa Koussa, The Libyan Who Knew Too Much

This virus seems tailor made to cull the terminally stupid. I hope enough of us non-stupid people survive to out-vote the stupid this year.

Also, racism. Anti Chinese racism has a long and dark history in this country. Anti Asian racism too. Add in our fascination with Russian style “communism”, and that created a giant blind spot that China has used to gather its power.

MtAiryGrl
Reply to  No Straight Lines

Its tailor made to cull the victims of our processed food system. Unfortunately, that’s about 60% of Americans, and sadly tilts towards America’s most true blue demographic.

There’s much stupidity in this nation. Just this morning, the sheriff of Snohomish County, Washington — home to the first Covid-19 case in the U.S. and the first major outbreak — announced he would no longer enforce Governor Inslee’s lockdown order. If only the virus could be contained among the stupid!

Will the WA Governor be ordering the national guard to pay a little visit to Snohomish county?

I like the post-Cold War hypothesis, but I would argue that the stupid starts with the Baby Boomers. What made them go cray cray and soft? Or were they always that way? Millennials figured it out, but the Baby Boomers prevented Obama from enacting true change…and killed the Revolution.

Perhaps the Baby Boomers have become convinced there is something wrong with populist ideas, that they are somehow evil. What other reason is there the M4A can’t get passed?

No, its not Baby Boomers, most of us are in the same boat everybody else is in.

>What other reason is there the M4A can’t get passed?

The state of Maine investigated and here is what they found:
https://web.archive.org/web/20170214121354/http://www.maine.gov/legis/opla/ctpchlthcaresub.pdf

No doubt you are into something, although I hadn’t really thought all that much about the UK being of decisive importance in Cold War calculations. Sort of like the fact that Slovakia was a Nazi ally in the Wehrmacht’s invasion of Russia in 1941, haha. I would note that London and New York were/are the world’s financial capitols, and thus the seats of the most toxic form of adventure capitalism, whose abusive plutocrats (and their media organs) likely infected the governmental systems of both countries very badly. Certainly that was what happened in the US, as you wisely observed with… Read more »

“I would note that London and New York were/are the world’s financial capitols, and thus the seats of the most toxic form of adventure capitalism, whose abusive plutocrats (and their media organs) likely infected the governmental systems of both countries very badly.” —end quote— Oh yes, this is exactly what happened and is happening. They have literally taken over. This is mostly about US but also a bit about the UK but those parts also applies to us, as I’m describing the underlying madness that is going on. Which is based in ‘trade and einvestment agreements’ https://www.allysonpollock.com/wp-content/uploads/2013/04/Lancet_1999_Price_WTODomesticPolicies.pdf And the cost… Read more »

I’m sorry, but I have to disagree. Certainly the Gingrich Revolution was a turning point, but growth of the stupid goes at least back to the Carter administration and the official acceptance of the “free market” as the supreme arbiter of truth, justice, and The American Way. When a Democratic President adopted deregulation to make natural monopolies “more competitive” because that would “improve efficiency” we were doomed. The decline was cemented into place when Al From established the Democratic Leadership Council in 1983 on the principles that we needed more police and the New Deal was outdated. The belief that… Read more »

IIRC, in Barbara Tuchman’s The March of Folly she has a chapter about the British bungling that lost them their 13 colonies along the Atlantic Coast of North America in which she recounts as an example of arrogance by English policymakers the fact that not a single one of them ever traveled to the colonies to gain a better understanding of what was going on.

That kind of willful ignorance has painful resonances with today.

By the way, love how the photos used answer your question before another word is read.

Selfishness, greed and apathy, fed by the intentional dumbing down of public discourse has led to the inevitable – a deeply stupid and disengaged electorate, enthralled with reality TV and a shallow focus of “my family” has led us to this point.

There are a number of initiatives to put aside the current drug regulatory frameworks and put together worldwide, nonprofit patent and IP pools to rise to meet the challenge of COVID-19. Normal profits are not improper, the kind of pricing though that we are moving towards prices drugs by a new mechanism that does not look at costs of the drug, it looks at the cost of a disease, without the drug, and the amount of competition. Exploitative profits are what this model produces. For example, $1000 a pill for a recent cure for Hepatitis C. Or similarly insane prices… Read more »