When we last saw media thug Chris Cillizza, aka “the punchline to the cruelest work of absurdist comedy in the history of the fucking universe, and that the title of that work is On the Origin of Species,” he was claiming to have learned a lesson about being a real reporter who wears big boy pants. Less than three months later, he was getting trashed in the New York Times for backsliding, and by the end of the year, he was whining that his job requires him to work.

So much for lessons, I guess. Now he’s trying to pull a 2016 “But Her Emails” on Joe Biden, cynically using Tara Reade as his hand puppet—and if Twitter’s any indication, it’s not going too well. A lot of people have figured out Cillizza’s schtick since the last election, and are none too impressed with the caliber of his output. So consider this not so much a judgement on Reade’s allegations—I know as much as Cillizza, meaning “nothing”—but an object lesson in journalistic credibility.

To the best of my knowledge, Cillizza first writes about the Reade allegations on April 27. It immediately gets ratioed. The comments are… cruel. 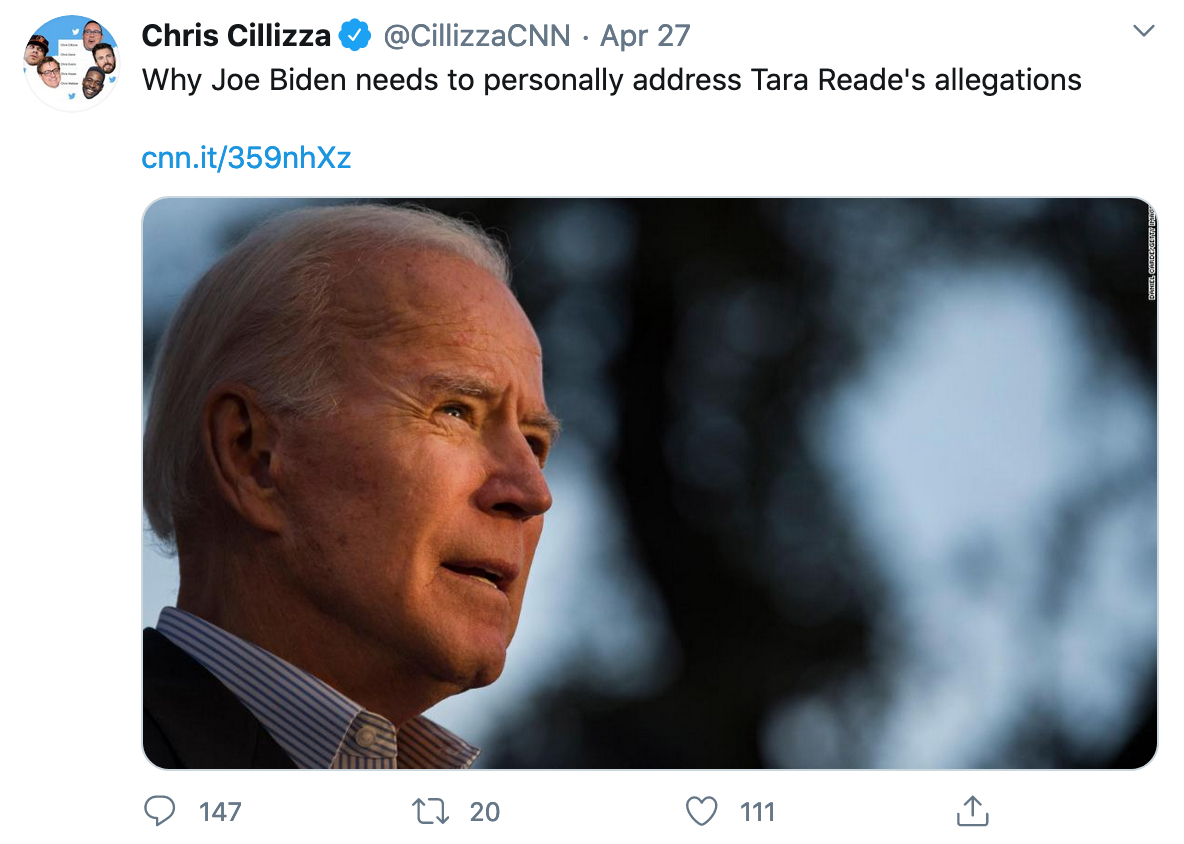 Cillizza tries again, this time with a short bromide on “character,” and a link to his article, “Why Joe Biden needs to personally address Tara Reade’s allegations,” in case you missed it. No one missed it: Cillizza gets ratioed, again. Readers are not kind in their assessments. 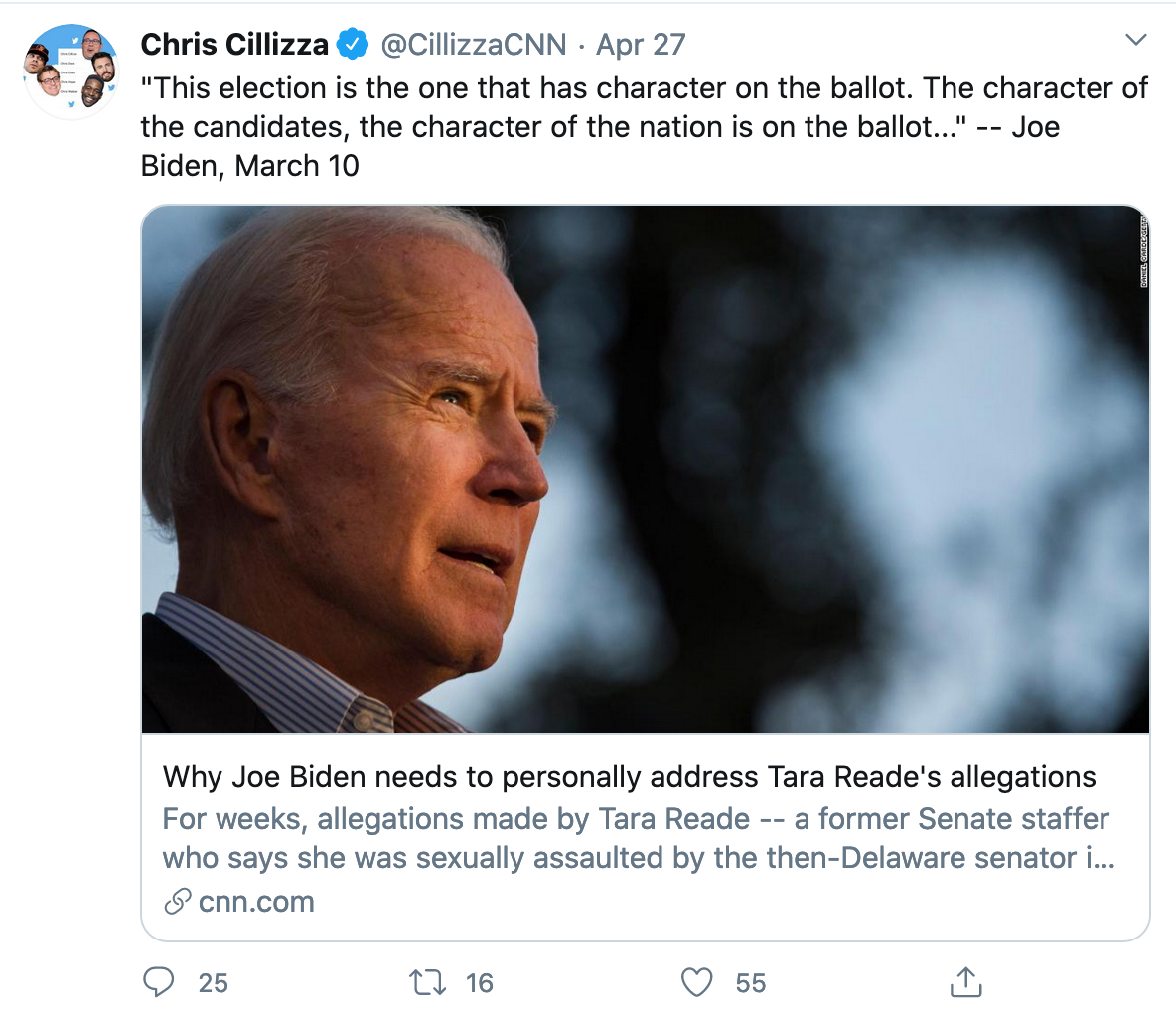 Cillizza begins getting desperate, making another appeal to “character”—as if nobody knows the sitting “president” has been accused by upwards of 25 women of sexual assault and outright rape—and goes a little further. He tries to shame the Biden campaign for rebutting the allegations through “a senior female campaign staffer.” Cillizza—who some say should be “fired out of a large cannon into an even larger cliff face”— also tries to set himself up as some authority that Biden has to answer to. He gets ratioed, again, probably because he’s been well-known as a misogynist dating back more than a decade when he was joking about “Mad Bitch” Hillary Clinton. 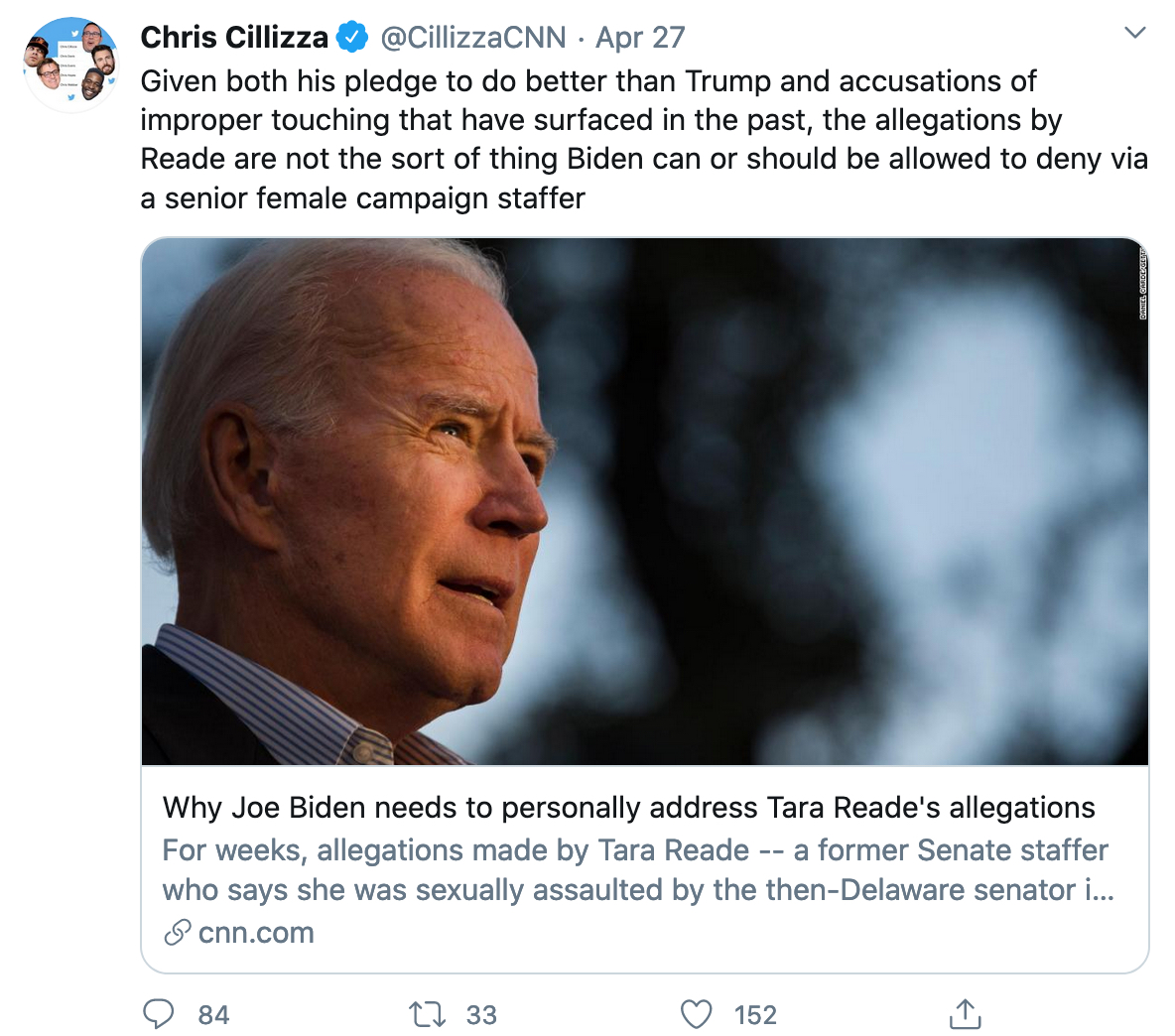 Cillizza transmogrifies into a child being potty trained, begging readers to look at his poop before judging it. He gets ratioed, brutally. It is still April 27. This has all occurred in less than 24 hours. PLEASE LOOK AT MY POOPY, MOMMY! LOOK AT IT, LOOK AT THE CORN AND THE PEANUTS MOMMY! I’M A BIG BOY! LOOK WHAT I MADE! 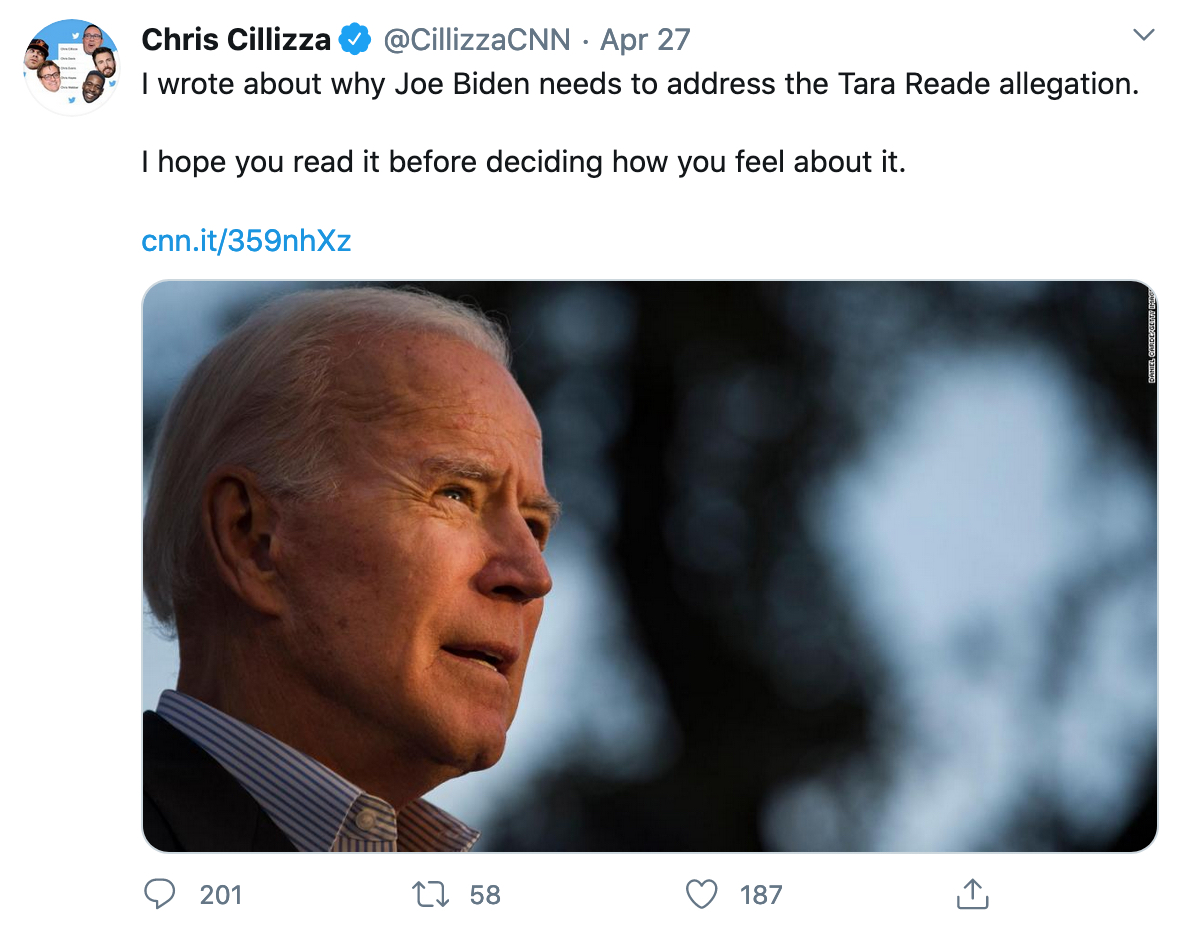 It’s like watching the embarrassing “DEBATE ME, AOC” debacle all over again, but even stupider and with less merit.

ANYWAY—on April 28, our hero takes another stab at it, intoning that Joe Biden needs to use a covid-19 townhall to discuss the Tara Reade allegations. We all know what happens, because Cillizza is too lazy to learn anything and because he has no credibility anymore. 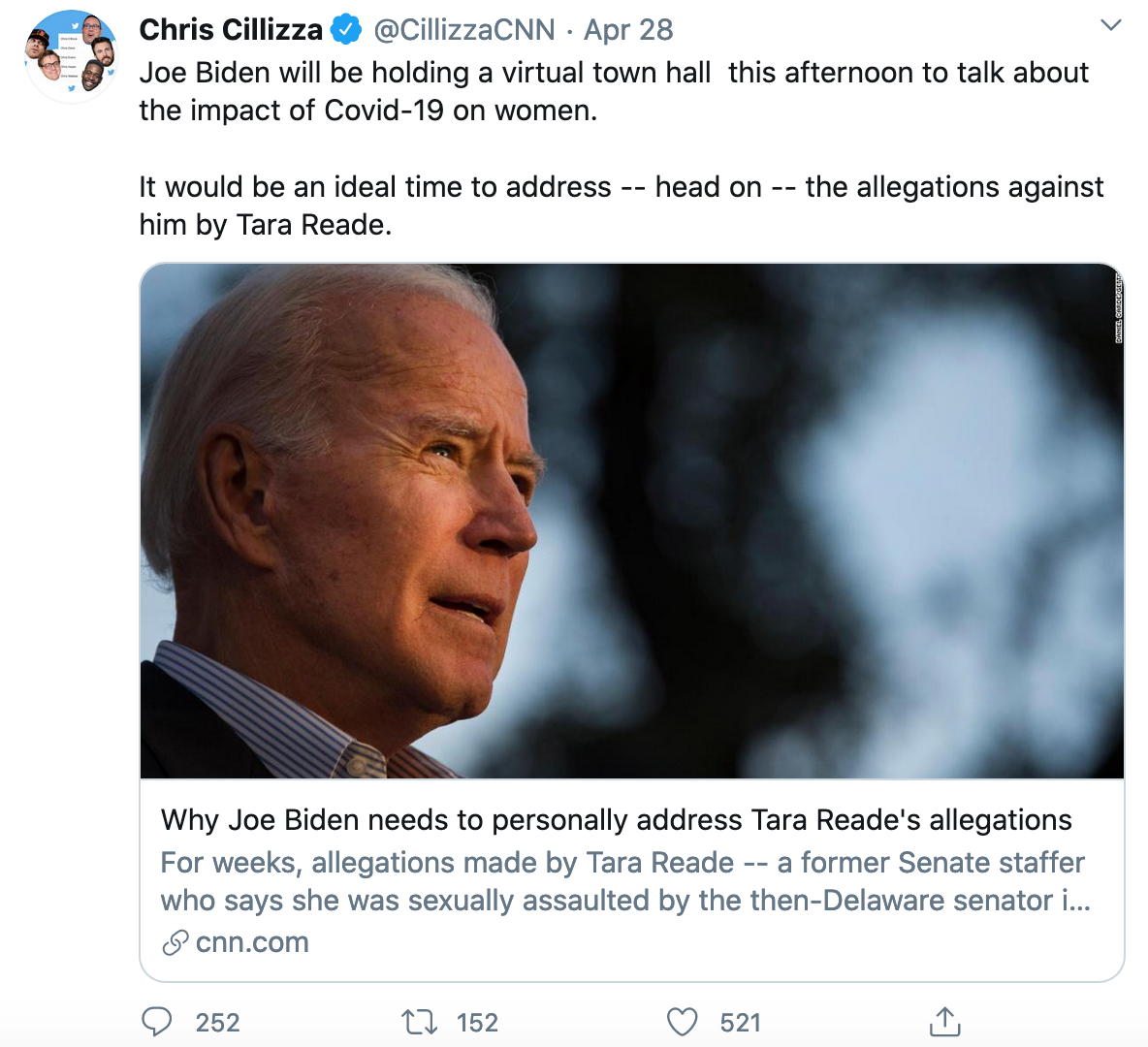 That’s when Bob Cesca (who knows how a lunkhead like Cillizza functions) tries to step in. Chris gets huffy. He also gets ratioed, again. 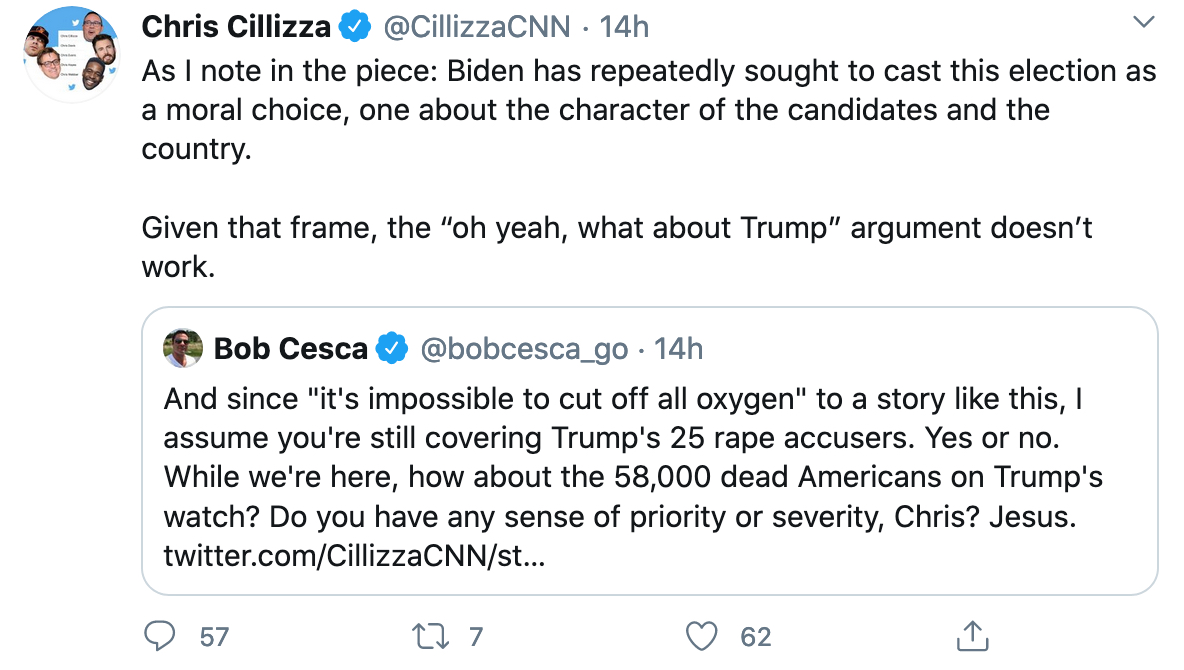 As it turns out, Biden does NOT address the Reade allegations in his address. So we get a double flusher from Cillizza, who now seems to be lobbing threats at the campaign. “It is impossible to cut off all oxygen to a story like this one,” Cillizza scolds. Maybe he should go speak to the many women who have accused Trump of assault, and ask them about “cut[ting] off all oxygen.” Anyway, these don’t go over well either, because everyone knows Cillizza is insincere, doesn’t care about Tara Reade or her allegations anyway, and is one of the many useful idiots who helped put Trump in the White House. 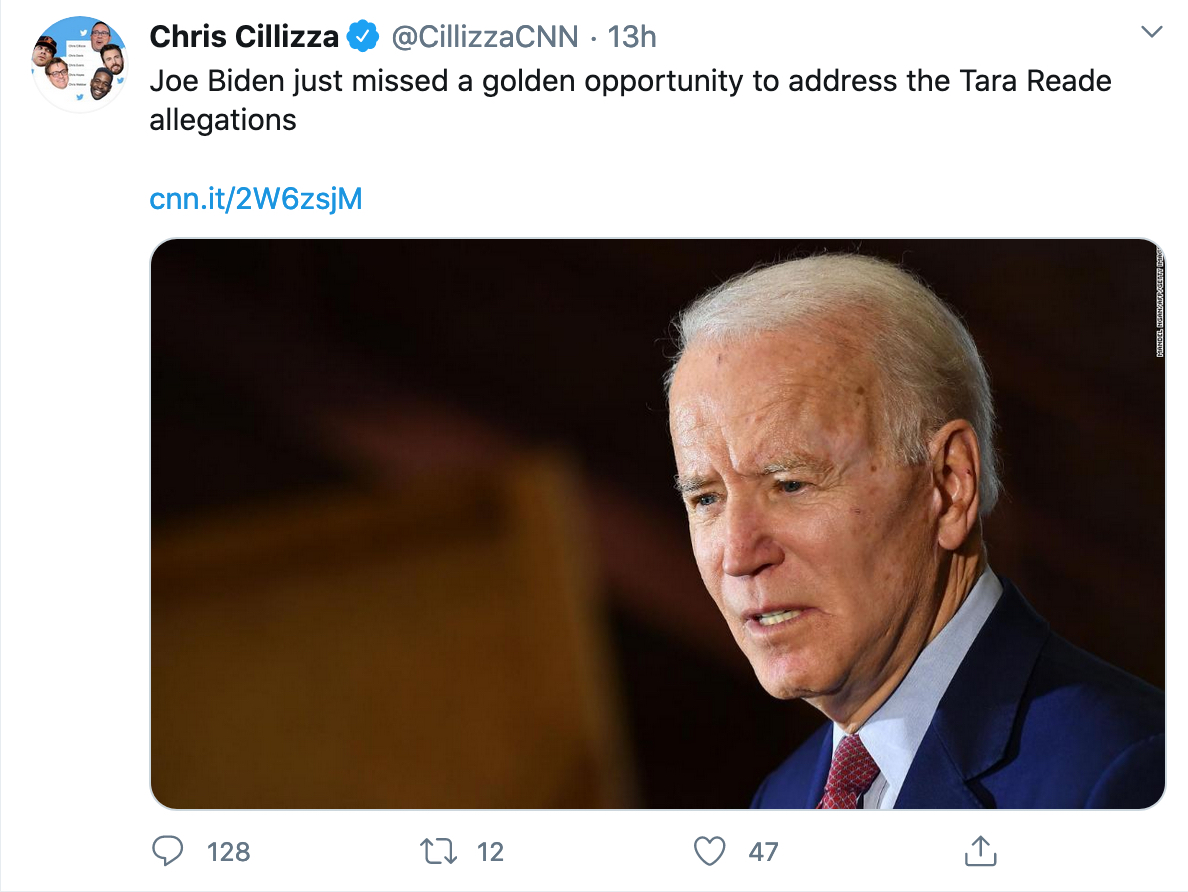 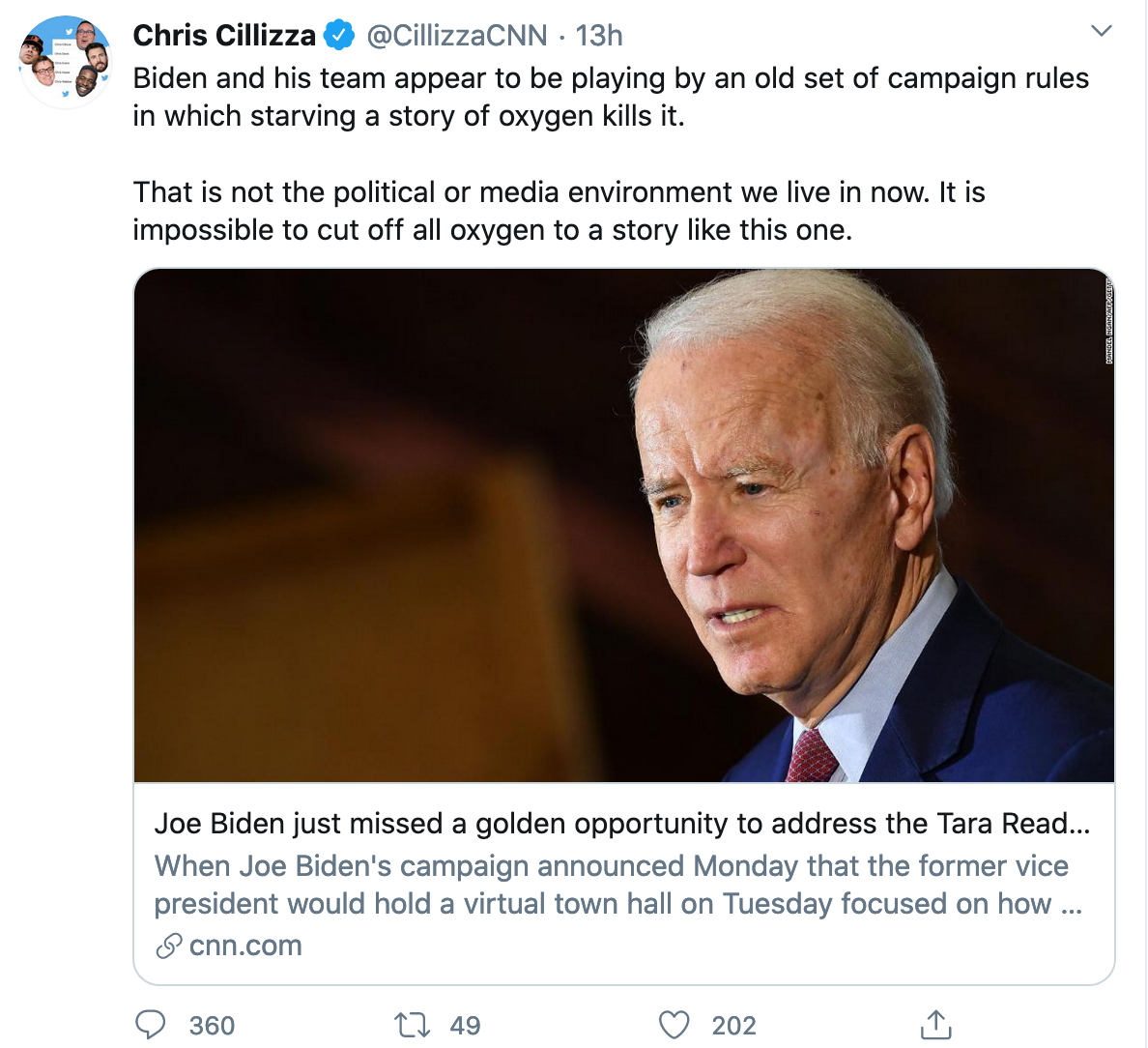 Finally, we reach the end (no we haven’t, he’s still fucking that chicken) of our very sad story, as Cillizza goes full sour grapes and does a little #metoo cosplay for the rubes. No one’s buying this one either. 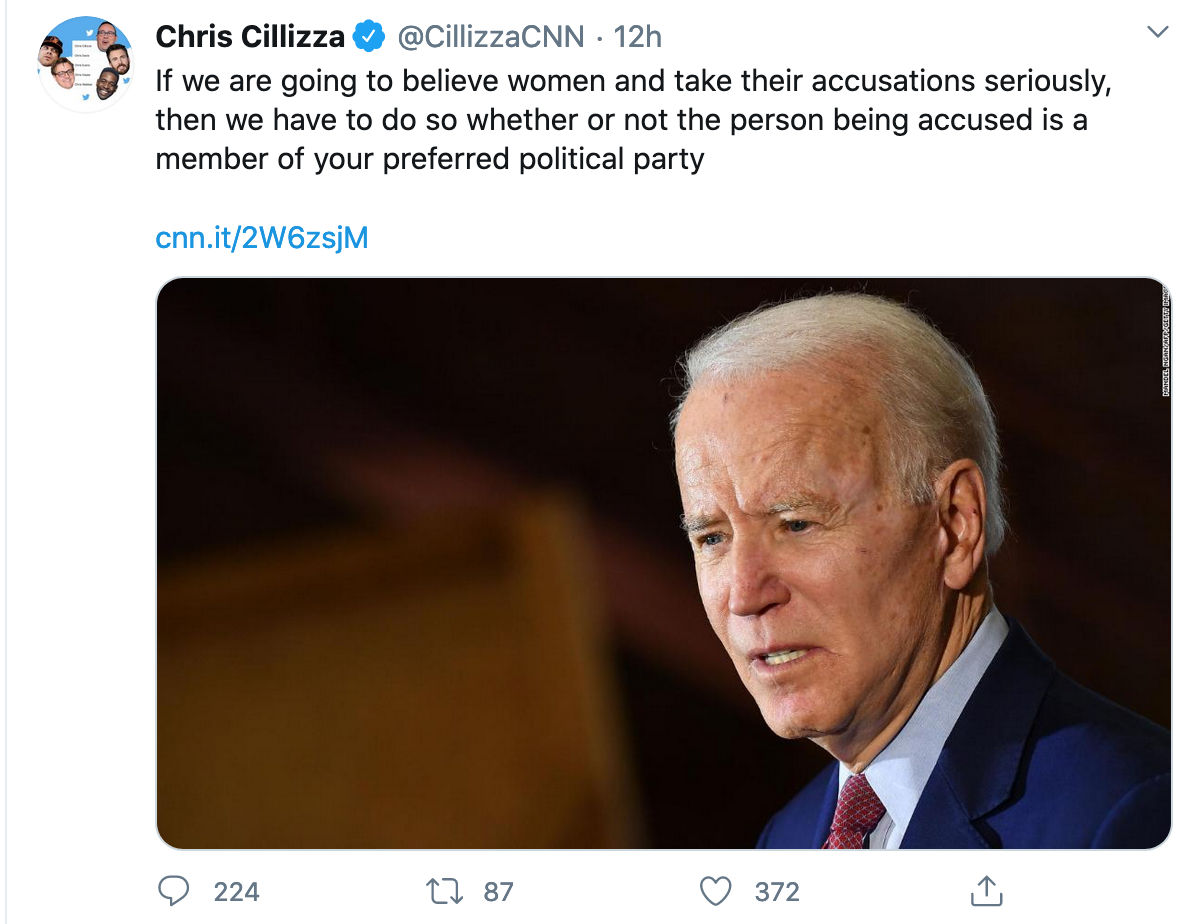 The fact is, the story HAS been taken seriously and been found wanting. The Washington Post’s Ruth Marcus found numerous red flags. I hate the New York Times a lot, but they also found questions. All of these articles and more are widely available, and were published weeks before Cillizza went on his latest jihad.

But that is neither here nor there. This isn’t to suss out the truth of Reade’s allegations. If there’s substance to what she has to say, it should be thoroughly investigated and let the cards fall as they may.

But that task should not, and must not, fall to a character assassin like Chris Cillizza, who doesn’t give a shit about Tara Reade or accuracy, and who God clowned before he was born by making him Chris Cillizza instead of a shit-eating maggot. 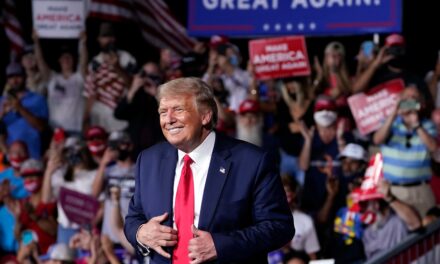 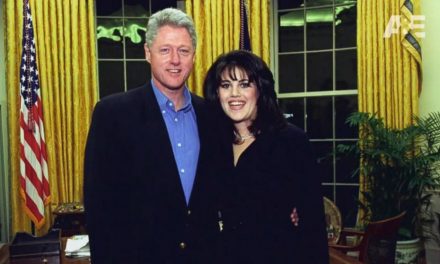