A President for ALL Americans 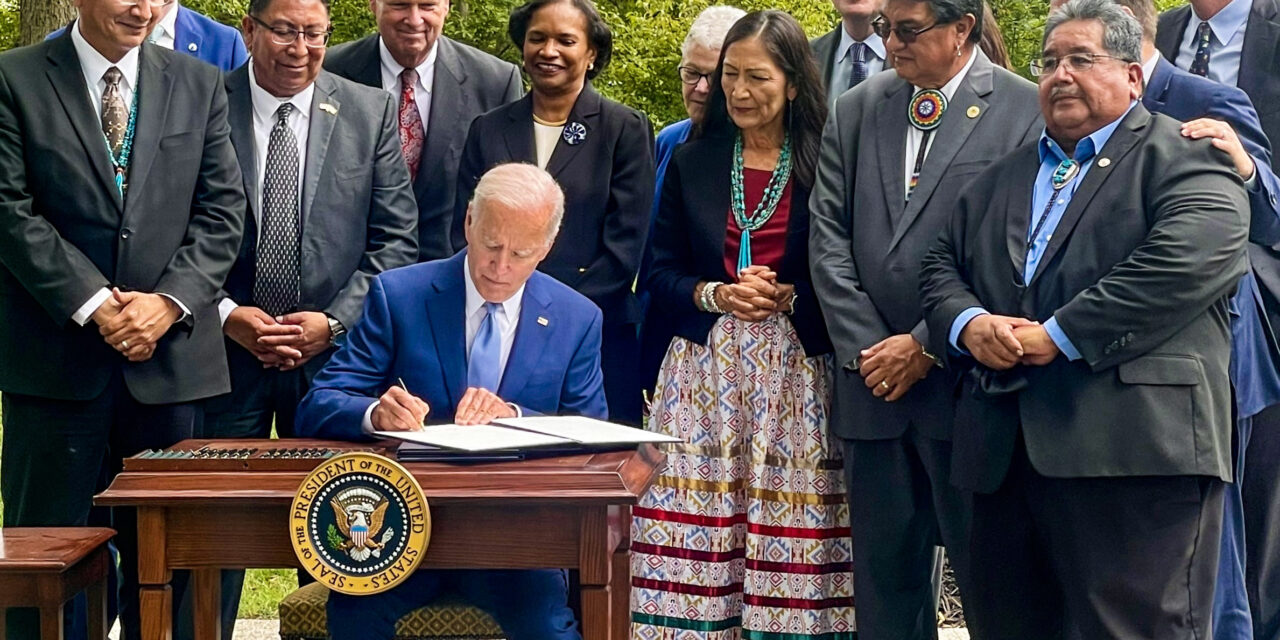 How it started: How it's going: pic.twitter.com/PLJcectQqp

I didn’t recognize the picture on the left. It was apparently taken in 1948 after passage of the Pick-Sloan Flood Control Act, which was the federal government’s attempt to “control” the Missouri River. It called for a series of dams, including the Garrison Dam, which created the 200-mile-long Lake Sakakawea. As a result, 436 of Fort Berthold Reservation’s 531 homes, as well as every square foot of the enviable farmland tilled by the people of the Mandan, Hidatsa and Arikara nations, were flooded. Initially the tribes fought back.

But these arguments were no match for the government’s determination to tame the Missouri and spare any ill effects being visited upon its constituent white farmers—who owned less than 10 percent of the land lost to the series of dams the Pick-Sloan Flood Control Act of 1944 installed above Yankton, South Dakota. The rest was all Indian land.

Out of options, the tribes accepted the government’s offer of $5 million in exchange for their homeland. At the signing ceremony on May 20, 1948, in Washington, D.C., the bureaucrats were straight-faced. The suit-clad tribal chairman, George Gillette, stood just to the right of Interior Secretary Julius Krug, crying into his hand.

Gillette was right to weep. The affected tribes went from a thriving community to one that experienced an 80% unemployment rate.

That is the kind of story racist right wingers don’t want taught in our schools because it could make white people feel uncomfortable – never mind how it affected Native Americans.

The picture Haaland posted on the right took place as she and tribal leaders witnessed Biden signing proclamations that restored the original boundaries of Bears Ears, Grand Staircase-Escalante and Northeast Canyons, and Seamounts National Monuments. It was Secretary Haaland who shed tears that day, but for the opposite reason.

Interior Secretary Deb Haaland gets emotional speaking about measures the administration is taking to restore protections for national monuments pic.twitter.com/3wBxmpbF4j

That is a reminder that, without much notice from mainstream media, Biden is following in Obama’s footsteps when it comes to fulfilling the promises he made to our native brothers and sisters. In addition to restoring monuments and naming the first Native American to a cabinet position, here are some of the things the Biden administration has done in its first year:

The CARES Act allocated $8 billion for tribes to combat COVID-19.

Two Native American women have been nominated (and confirmed) to serve on federal courts.

The first Native American, Charles Sams, has been confirmed to head the National Park Service.

The president signed an executive order “Improving Public Safety and Criminal Justice for Native Americans and Addressing the Crisis of Missing or Murdered Indigenous People.”

All Legislative Concessions Should Come in Return for Votes