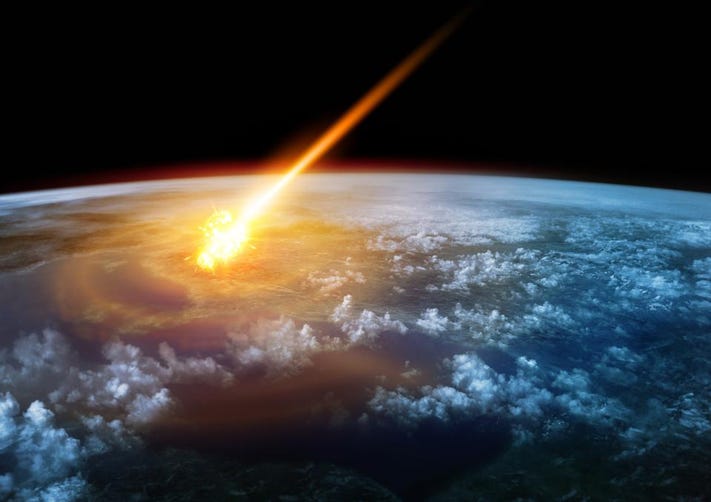 I watched Don’t Look Up alone, and then I watched it again with CabinGirl. That was an interesting experience, because we had similar reactions but on a time delay. Despite being a movie about the end of sentient life on Earth, it’s filled with farce and laughs. In this, it’s a modern day equivalent of Stanley Kubrick’s 1964 classic Dr. Strangelove or: How I Learned to Stop Worrying and Love the Bomb, which ends with a nuclear holocaust.

I first saw Dr. Strangelove in the late 1980’s, and by that time the Cuban Missile Crisis was far enough in the rearview mirror that I had no trouble laughing at the jokes. The jokes in Don’t Look Up are damn good, but they hit very close to home. When I finished watching the movie alone, I was a little shaken and I thought maybe the movie didn’t work.  But then I started to realize that the intent of the movie was to startle and so I should consider it a success. The second time I watched it, it was easier for me to laugh, but CabinGirl just grew steadily more concerned.

And, of course, Dr. Strangelove used farce to highlight that the national security establishment at the time was off its collective rocker and likely to get us all killed with their theories of nuclear deterrent and mutually-assured destruction. Don’t Look Up has a broader set of targets which includes our media and the public’s obsession with getting likes and follows. The basic plot is simple. Some astronomers discover a new comet which is cause for celebration, but soon realize that it’s a collision course with Earth and will cause a mass extinction event like the one that did in the dinosaurs. The problem is that they can’t seem to get anyone–including the Trump/Palin hybrid president played by Meryl Streep–to take the threat seriously.

It’s an allegory for our behavior in the face of climate change, but it serves just about as well for our reaction to the COVID-19 pandemic. I won’t add any additional spoilers here except to say that Streep’s followers closely resemble Trump’s, and the satirized media outlets are easy to identify as Fox News, CNN, MSNBC, OANN, Alex Jones, The View, etc.

The right definitely comes in for the lion’s share of blame, but not exclusively. Basic human weaknesses are explored without respect to ideology, and there is also a scalding critique of Elon Musk, Jeff Bezos and others who are looking to commercialize space.

Near the end of her viewing of the movie, CabinGirl wondered aloud how the right would react, and we now have an answer from Madeline Fry Schultz of The Washington Examiner. Apparently the movie is bad in part because its received some less than glowing reviews from NPR and the New York Times.

In both of those cases, however, the complaint is basically that the movie is too strident: “a cathartic scream-cry of a movie” that “isn’t doing much more…than yelling at us.”

Again, the problem may be that’s it’s too on the mark. We’re approaching a million dead Americans in the COVID-19 crisis, hundreds of thousands of which died unnecessarily because they would not get vaccinated. Is it surprising that it’s hard to laugh at jokes about mankind going extinct because too few will listen to experts?

Schultz’s movie review would be right at home within the script of Don’t Look Up, as it looks to shift the blame away from MAGA types and onto the scientists.

The film’s ultimate message about “listening to the science” comes off as entirely tone-deaf after nearly two years of people wearing masks outside, masking children, and cheerfully participating in hygiene theater for the sake of appeasing “experts” and political special interests. As children’s mental health has suffered, small businesses have closed, and seniors have died in isolation, “the scientists” have insisted on keeping the country shut down as long as possible no matter what the science says. Just as their judgment is finally being questioned in earnest, Don’t Look Up’s message is that the people (and of course the greedy capitalists) are wrong.

Don’t Look Up might get the Oscar nods it’s clearly aiming for just with its politics, but it’s unlikely to cause any change. Critiquing the “deplorables” who question catastrophic climate rhetoric and embracing the proposition that the world is about to end is always a great way to earn applause in Hollywood. But if [director Adam] McKay had really been interested in good satire, he wouldn’t have passed over the perpetrators of the crisis staring him right in the face.

I suspect that Dr. Strangelove had a modest but not unimportant impact in changing public perceptions about nuclear weapons policy. The next decade saw serious efforts to reduce risk, including most prominently the Strategic Arms Limitation Talks (SALT I)  treaty with the Soviet Union which was enacted in 1972. If Strangelove worked at all, it worked because it went at the issue indirectly through comedy. That’s the ambition of Don’t Look Up, but I have to say that if it fails as a movie it isn’t because it fails as a wake-up call. I think the main issue is that it doesn’t provide a kernel of hope.