.
False Republican claims about President Barack Obama’s health-care initiative, including former Alaska Gov. Sarah Palin’s demagogic charge about a “death panel,” are part of a pattern of systematic lying that has marked the GOP’s political tactics at least since Ronald Reagan’s presidency in the 1980s.
h/t Real History Lisa

They don’t shoot journalists, do they?

Koos Koster was born in 1937. He was one of five sons in a family that also included seven daughters. The father was a minister in the Frisian village St. Annaparochie. Koos was deeply involved in his father’s profession as a minister and paid close attention to his sermons.

The transition from the church to journalism was evident in the years 1968-69, when he started working for Radio Noord in Groningen. At the same time he studied theology at the Vrije Universiteit in Amsterdam, where he graduated in 1970. This is also the period of the beginning of his interest in Latin America. He was very impressed by people like the Brazilian bishop Helder Camara and the Colombian Camilo Torres. Torres was a priest who followed his political convictions and joined the armed struggle; he was killed in 1966.

Although Koster considered writing a dissertation on the Latin American priests, he decided to become a journalist. In the seventies he worked for the IKON broadcasting network and the weeklies ‘Hervormd Nederland’ and ‘De Nieuwe Linie’. He moved to Chili and married (in Groningen) the Mexican Ana Maria Rumayor.

In September 1973 Koos Koster reported on the events in Chili. On the 20 September of that year he was arrested, and like so many others, was confined in the Santiago football stadium. This experience had a lasting impression on him.

Another event that deeply affected Koster was the shameless murder of Bishop Romero on 24 March 1980 during the celebration of holy mass in the cathedral of San Salvador. Koster had previously interviewed Romero, which reinforced his believe that journalism was a sacred profession meant to bring out the truth.

Leaflets were circulated by one of the first right-wing death squads urging “Be a patriot – kill a priest.”

When he was appointed Archbishop of San Salvador in 1977, Romero was regarded as a conservative. But he began to take a stand when a radical priest who was his close friend was murdered by paramilitaries. 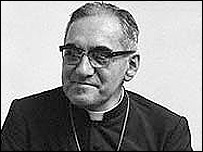 Romero refused to recognise the government and publicised the human rights abuses on his trips abroad. As the situation worsened in El Salvador and left-wing guerrillas gathered strength, junior military officers decided that they would have to act quickly to prevent all-out war.

In October 1979, they staged a bloodless coup, invited civilians from the opposition to join the government and promised free elections, an end to human rights abuses and land reforms.

. Brazil: Crime show host ‘ordered killings to boost his ratings’ MANAUS, Brazil (Evening Standard) – The presenter of a TV crime show in Brazil is suspected of ordering killings to increase his ratings with graphic footage of murder scenes. Wallace Souza, 50, who is also a politician and a former police officer, is accused of involvement in at least five deaths in the city of Manaus. Suspicions were raised after his Canal Livre programme featured exclusive film of murder victims where camera crews often arrived before police. Souza has also been accused of drug trafficking with links to death… Read more »