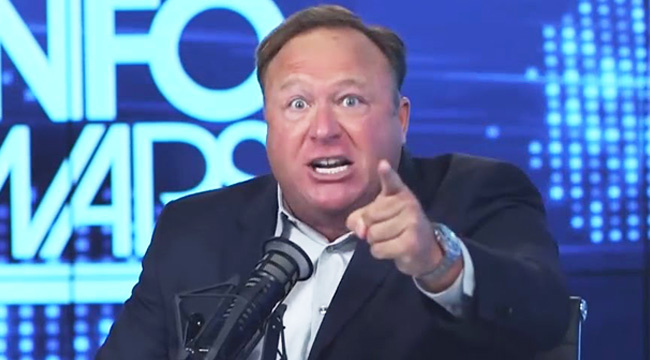 You may have heard that radio/tv shock-jock and conspiracy theorist Alex Jones is being sued for causing emotional distress to parents of the children who were massacred at a Newtown, Connecticut elementary school in 2012 by claiming repeatedly on the air that the event never happened. As part of that suit, Jones submitted to a deposition back in March, the details of which were revealed last Friday.

Jones, who repeatedly claimed on his internet and radio show InfoWars that the mass shooting in Newtown, Conn., was a hoax, told lawyers he “almost had like a form of psychosis back in the past where I basically thought everything was staged, even though I’m now learning a lot of times things aren’t staged.”

Jones blamed his mental state on “the trauma of the media and the corporations lying so much, then everything begins — you don’t trust anything anymore, kind of like a child whose parents lie to them over and over again, well, pretty soon they don’t know what reality is.”

The admission came toward the end of the three-hour deposition recorded in a downtown Austin law office March 14 in one of several lawsuits brought in Austin, Connecticut and Virginia against Jones by parents of children killed in the shooting. The suits contend that Jones’ repeated claims that the shootings were staged showed a reckless disregard for the truth and for the distress and real harm he was causing the parents, piling torment on their tragedies.

Here’s my main problem with this legal defense. Alex Jones carved out a very lucrative career for himself by promoting conspiracy theories, starting with the 9/11 tragedy. He understood that there was money to be made on people’s paranoia and he exploited that to the hilt. The odds that he was able to do this while simultaneously being a victim of his own fraud strike me as virtually nil. Charlatans and conmen don’t get rich by falling prey to their own con.

The guy doesn’t strike me as stable, so it’s not that I have trouble believing he’s a little crazy. I doubt he has the firmest grasp on reality that can be found in nature. I could even believe that fame, fortune, and prolonged exposure to people who live in a constant conspiratorial state of mind might have taken a toll on him over time. But I think he started his career with a basic insight into a weakness in human nature, and I do not believe that he’s ever lost his grasp on the method of his “madness.”

He knew that the Sandy Hook massacre was a real tragedy with real grieving parents. He also knew that he could make a ton of money by suggesting that it was staged by people who wanted to confiscate guns.

Legally, I don’t know what his exposure is because it’s tricky to prove that someone wasn’t sincere in what they were saying. But, as a moral matter, I think he’s guilty of one of the single most despicable acts I have ever witnessed.

A father dedicated to helping prevent mass shootings after his daughter was killed in the Sandy Hook massacre has died of an apparent suicide.

The body of Jeremy Richman, 49, was found in his Connecticut office building Monday morning, Newtown police said.
The neuroscientist was the father of 6-year-old Avielle Richman, who was among 20 children and six adults killed in the 2012 Sandy Hook Elementary School shooting.

I absolutely place some of the blame for Mr. Richman’s death on the actions of Alex Jones. It’s not only what he said, it’s also that by saying it he made it harder to do anything to prevent the next couple of dozen mass shootings. When your child dies senselessly and the government does nothing to protect other children from a similar fate, that’s recipe for despair and hopelessness. Alex Jones would have this on his conscience if he had a conscience. 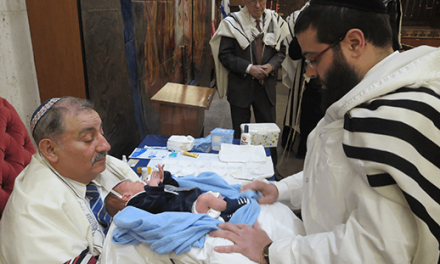 This week on Your Call Radio

It’s just so mindlessly cruel. The survivors/family and everyone associated with them will never escape the nutcases and their conspiracies.

I do. He’s crazy as a bedbug. But that’s not the point. Besides the amplification of grief that the survivors suffered at his hands, his actions…and the actions of similar nutcases…led directly to Trump’s successes. For that and many other reasons, I hope he doesn’t get away with it. But the primary reason that I hope this plea gets shoved right down his throat is the following: Someday in a perfect world, when the reckoning comes to…ohhh, say Trump or any of the other frothing nutcases who have led this country into its present despair over the past 50+ years… Read more »

Remembering his divorce proceedings where he told the court that ‘he was just an entertainer’ which I hope the Sandy Hook attorneys will use against him.

And while the Sandy Hook cases were building against him he chose to go down the same path against the Parkland families.

After he loses everything chance will still be pretty good for him to get a Trump pardon. Wonder if he knows that accepting a pardon means he’s admitting to guilt?

Isn’t this a civil case?  If so, there is no pardon for that.

Indeed. Not only is there no pardon but there’s no insanity defense. Anyway, just asserting that “I had a psychosis” is not an actual defense under any circumstances. He’s just desperate because he knows he’s going to lose a lot of money.

If the plaintiffs’ attorneys used the right causes of actions, they won’t need to prove that he knew he was lying (that he wasn’t sincere), they will only need to prove that he knew or should have known that the stuff he was peddling would cause emotional distress to the parents and survivors.  Negligent infliction of emotional distress, but I have not been following these lawsuits. I will see if I can find out more about the causes of action in their pleadings because the know or should have known standard should be pretty easy to meet in this case,… Read more »

Negligent infliction of emotional distress, where even allowed, is a very tenuous cause of action. It has to be off the charts outrageous. Maybe this meets the standard but I don’t think it’s clear. When I think back to law school, the kinds of cases that were successful involved things like suing an estate after someone committed suicide in the most disgusting and bloody way possible and setting it up so someone targeted would stumble upon the scene. Jones’s attorneys will argue that words do not and cannot represent that level of misconduct.

Not psychotic. Psychopathic. Not the same thing at all.

An obvious lie, and in any event falls into the “too little, too late” category (very conveniently). Hopefully a sensible jury will award enough to cripple Jones financially for the rest of his life/”career” and will make the necessary determinations so he cannot have the award washed away in bankruptcy. He should end his days as a night shift manager at a suburban Chick-fil-A. And (just curious) where’s the well-known “conservative” claptrap that one must bravely take “personal responsibility!” for one’s actions, Alex?  Kinda strange how “conservative” males apply that bromide to everyone but themselves, eh? Vicious, morally deformed turds.… Read more »

Come to think of it, Jones’s defense isn’t very far removed from the white-supremacist playbook.  When exposed, the supremacist’s first fallback has been: “I was joking.  I didn’t mean it that way.”  Jones basically says, “I didn’t know better, and couldn’t have known,” and “the media and corporations” made him do it.  Both distance themselves rhetorically from the core beliefs/practices in socially awkward circumstances.  Their cotravelers recognize that the distance is an act.

(Now, of course, thanks to the Repugnican Party, the supremacists don’t feel they have to apologize.)

Well, my previous comments are probably irrelevant.  These suits against Jones state defamation claims, not infliction of emotional distress so far as I know. (Until I see the actual complaints filed by the Plaintiffs, I won’t know for sure.  Reporters often make mistakes.) Plaintiffs will have to prove that Jones knowingly or negligently published false statements.  The “negligently” standard is usually he knew or should have known his statements were false.  The defamation comes from the fact that he called the parents liars and “crisis actors” and similar actions that basically was Jones calling them dishonest when they told of… Read more »

In the days after the shooting and afterwards, Jones and others on his horrible show claimed to have done their own journalistic research and, through that, discovered that the parents were “crisis actors.” Then they shared the name and address of one of the dead children’s parents, knowingly setting their listeners out to attack those parents. That’s really going out of your way to use your media megaphone to damage the lives of private citizens. There have to be limits to the First Amendment. I think it would be lunacy for the legal system to have to establish how “sincere”… Read more »

Of course he should have known his comments were false. Any sane person would know that.

Oh wait … that’s why he’s trying to use the insanity defense.

But the point’s been made — if he has a mental problem, then how was he sane enough to build a a highly lucrative business empire on it? Sorry Alex, you can’t have it both ways.

Perhaps, in addition to a monetary recompense, he should be required to spend as many hours, on air, refuting his previous claims as he spent in broadcasting them.  An exercise in mental hygiene, so to speak.

The events at Sandy Hook broke something inside of me. And I don’t think it is something that will ever be mended. Even as I sit and type this now, tears are welling up involuntarily. Like the events of 9/11, I think that beautiful, clear December morning will be forever etched into my brain, and the memory of sitting in my car, weeping at the awful visions of what had transpired, as the news reports were playing on the radio. The pain of people like Jeremy Richman is just an unfathomable thing for me to even try to ponder or… Read more »